The Goo Goo Dolls Grow Up 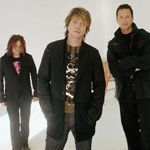 The Goo Goo Dolls are a true Rock 'n Roll band, as reflective of their generation as The Rolling Stones, Aerosmith and Kiss were representative of their own, especially given the defining line of longevity.

When they started out 21 years ago in Buffalo, New York, Robby Takac and his fellow bandmates were loud noisy punks on an Indie label; but by the early Nineties, their alt-power pop anthems such as Name and Iris took them to the top of the pop charts with a sound that cemented mainstream appeal with solid and uncompromising songwriting.

But life is about change, so when the group started writing songs for Let Love In, their tenth studio album, they decided it time to rediscover themselves as well as their collective muse.  Like many bands, the group had moved to Los Angeles after their 1998 blockbuster, Dizzy Up the Girl, many moons ago, but wasn't feeling the spark of inspiration they needed.

Consequently, they packed their gear into a U-Haul and drove across country to their old hometown, setting up shop in a 100-year-old Masonic Ballroom.  Notes singer/guitarist John Rzeznik, "Nobody likes to hear a rock star talk about his problems, but it was really alienating and strange out in L.A. All of a sudden people change how they treat you. I found a lot of people disingenuous, so my circle of friends tightened, as in there are fewer of them."

These feelings of isolation and a collective search for inspiration let them back to Buffalo, where the band basically wrote and recorded their latest smash release, Let Love In.

Recently I had the opportunity to speak with bassist and fellow songwriter, Robby Takac, during a big of downtime on their current national tour, which lands at Saginaw's Dow Events Center on Sunday, March 11th.

Review:  So Robby, where are you at what's happening?

Takac: I'm sitting here on my hotel bed looking out at this amazing large parking lot outside my hotel in Nebraska.  I'm sure on the other side, it's very beautiful.

Review: Let's talk about the new album. It's already spawned four hit singles and I'm curious, when you look back on the span of your career, how you feel the band's sound has evolved?

Probably the most important thing we've learned is how to stay together. That's awfully difficult for a lot of bands. But for this album, John and I wrote together, which is something we hadn't done since SuperstarCarWash.

Review:  How did you manage to avoid the 'one hit wonder' syndrome?  With a lot of bands, it's difficult to sustain a career after grabbing that brass ring.  Do you think it's a matter of growing up with your audience and do you ever worry about appealing to younger demographics?

Takac:  Well, our career has gone through a couple of phases. We spent 10 years working to be a great band and get recognized, 7 years of flying high on the hog, only to experience that period where the music industry collapsed and killed a lot of the rising and promising bands of the '90s.  I mean, we went from selling 35 million albums to selling 2 million and still having a national hit, so it was a strange period.

After 17 years though, you know how the business operates, and three companies own the majority of radio stations. The bottom line is that most kids do not understand the concept of going to a record store.  So after our Greatest Hits album, we wanted to stay focused on doing something new and interesting.

I used to think the audience coming to our shows consisted of our hardcore fans, or like to think that's happening. But about 10 years ago our crowd was growing up. When you listen to a song you wrote 20 years ago, you see how 'emotionally involved' you were in the song, kind of like the EMO thing, because it was written by a 20-year-old. But as we grew up, we wanted to play better and by the time Dizzy Up the Girl hit, it was like 'should we be doing this?'

But now we're finding a lot of fans bringing their kids to our shows, so it's cool to know that our fans children are getting in touch with our sound, and responding strongly to our new stuff.

Review: How does the creative process work in the band? Is it a collaborative effort?

Takac: John usually comes up with the idea and then I'll contribute some bits and some songs come together and some don't. Then I'll come up with a couple of songs and we'll go at it, more like an 'under construction' process.

Review: Is it easy to lose your group sensibility the more successful you become? I would think more temptations and opportunities exist for a band to become fragmented?

Takac: Once a band gets a hit usually the singer will leave and then he loses it. It's not enough just to have a song, you need the look - it's everything - the whole package that basically comes back to the line-up of the band. That's where the focus needs to be.

Review: What's your opinion about the 'state of music' today. Do you feel it's in a good place creatively? After all, there are more venues like myspace and more tools for bands to get noticed

Takac: I think it pretty much sucks.  Artist development is next to none in the industry.
True you have all these online tools, but it's hard to get anybody but a handful of friends to listen or discover you on myspace. Basically, if you're really good, it's harder to get noticed.

Review: Are there any defining moments or instances - people you might have met or had the opportunity to play in front of - that stands out in your mind over the years?

Takac:  I can site two moments.  The biggest is when we opened for The Rolling Stones for three weeks on one of their tours and to witness the conviction and genuine love for what they do was truly inspirational. Just to see what those guys still take on.  Each of their sound checks was 90 minutes a day. Most bands will spend 10 or 15 minutes doing it.

Another instance was opening for and touring and hanging out with Bon Jovi.  That's an entirely other wild topic, and one I'd rather not get into here. (laughter)

Review: Final question - something I like to ask any band I interview.  Using words instead of music, how would you describe the Goo Goo Dolls sound?

Takac: HmmŠgood question.  I would say it's an Eastern School version of Midwestern Rock. We're about making the rock show, not a lot of glamour.


The Goo Goo Dolls appear in concert on Sunday, March 11th at the Dow Events Center in Saginaw with special guests Augustana.  Tickets are $35.00 for all seats and can be obtained at the Box Office or through Ticketmaster.