The Craig John Band was established in 1979, after Craig John toured with a Las Vegas band and decided he wanted to hang around the home front for a spell. From 1990-96 he lived in Nashville and the previous incarnation of the group carried on as CJ LEFTUS.

"I've been interested in Country Music as far back as I can remember," reflects Craig. "My parents listed to Patsy Cline, Chet Atkins, and Earnest Tubbs; but they also listened to Glenn Miller and Jerry Lee Lewis."

"I love country music, but listen and keep my mind open to all music, as long as it makes sense," he notes. "If you want to be a good musician you have to listen and keep your mind open to it all. Personally, I've always played Country because it pays the best and steadiest and takes above normal talent to play correctly."

After 28 years, the group has established quite an alumnus of talent, featuring 28 members over as many years. Marty Campbell was also a founding member and has been in the band for a nine-year stretch this time around.

In terms of future goals & objectives, Craig has already experienced a steady run of achievements as a Country artist.
"I've performed in 32 states, Las Vegas Casinos, Nashville nightclubs, and toured on the 'big bus' with a Capitol records recording star that had two #1 records, Mel McDaniel (Louisiana Saturday Night & Baby's Got Her Blue Jeans On')," states Craig. "So most of my personal goals have been achieved.

" But I do have another new CD planned for this year, and would like to start playing some of the fairs & festivals on the Michigan circuit. For some reason, I never got to play on the 'Grand Ole Opry', and that would be a very important and special honor for me, even if I was just someone else's rhythm player."

When asked what the biggest challenge of the music business poses for him, Craig quickly responds: "You have to accept the challenge of being a proficient musician on an instrument, or vocalist, or songwriter and have very special talent to become something other than a passing fad."

"The competing talent is so numerous and often good that it's unreal, especially for a business with no security like health insurance or retirement benefits."

"There is really not much money in music, unless you are successful with a major record label, so never give up your day job, if it's any good, is my advice. A Nashville veteran once told me, 'If you aren't affiliated with a major label, then you aren't really in the music business, so make sure you are having fun with it."

"In the end though, the biggest challenge is keeping the mind set to accept the challenge of sacrificing your life to achieve success. You need a good attitude and the ability to promote yourself not only as a talent, but a businessperson as well. If you are young, talented and serious, get yourself to Nashville immediately, find a good day job, and work your music as a hobby until something happens for you."

When asked what he attributes the popularity of The Craig John Band to, along with the success at this year's Awards Ceremony, Craig points out that the people who have followed and supported his band for 28 years made all the difference.
"Plus I have four of the best guys you could ever be associated with. We've been performing at The Cloverleaf in Clio for about 2 years now. Back in the '80s, I played a lot at Jaspers and The Watering Trough in Saginaw, along with The Elbow Room in Bay City and Northern Lanes in Sanford." Craig notes that most of the group's original material is acquired from writers in Nashville ("They're much better at writing than I am.") and that the bands' new CD can be heard at www.soundclick.com.

"I'd also like to thank all the people who support my band and voted for us," concludes Craig," along with Review for giving local musicians most of the very little recognition they get, and deserve, for bringing people the gift of music. That's something to be very respected and appreciated."

"I'm honored to be a nominee. Congratulations to all the other nominees & winners, and thank you to the Black Forest for a great location to hold this event." 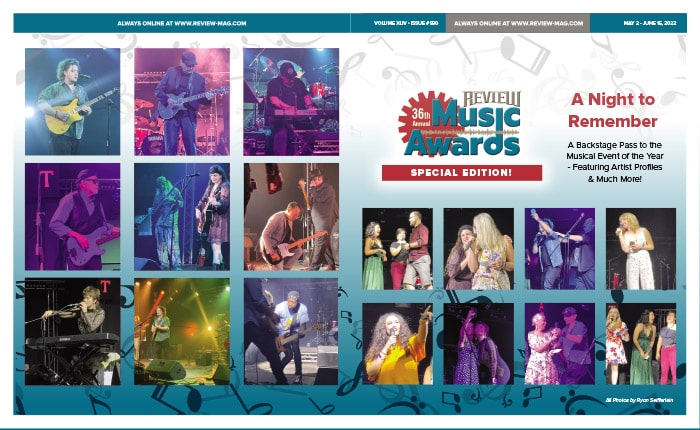