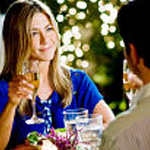 Unfortunately, The Bounty Hunter does not fare as well, unless your idea of a good time is to watch two ex-spouses verbally slam each other amongst a tapestry of clueless characters. The main reason for the stench in this film is the script, which is riddled with cliché’s, action movie standbys, and a confusing web of subplots. The sub-par dialogue tries too hard to be clever and comes off like a cop sitcom or a made-for TV movie.

While this film carries a top-shelf idea, it is rendered in a mediocre manner and confuses loving close-ups of Jennifer Aniston’s golden highlights with the warmth of her character. At no point in this film are you anything but fully aware that you are watching little more than some face-time with Aniston and her co-star Gerard Butler. It’s hard to believe the filmmakers thought watching these two scream at each other for almost two hours would be more than enough to satisfy the masses.