Teacher of the Year - Making a Difference: ROBERT GARCIA, JR. 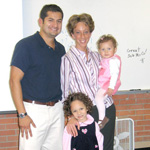 Scotty, a plump and pink-cheeked eighth grader, slumps quietly at a desk and shows a distant attitude.

Teacher Rob Garcia is directing his words toward the mother, who is seated closer to the front, but they are intended for the boys' ears as well.

"Nothing seems to bother Joshua, not discipline, not even suspensions," Garcia says.  "He's not arrogant or disrespectful or bad. It's more like indifference."

Mom nods in agreement but says little. Garcia - a trim and athletic 5-foot-8, leans closer with his right foot planted on a desk seat.
"He knows he can be successful," the teacher continues. "Once I asked Scotty how it would feel to get all A's, and he gave back a little smile."

The sun is just starting to rise. It's only 7:15 and classes won't begin until 7:45, but Garcia already has been there for nearly an hour. The mother is an early arrival so that she can make it to work.

Mom departs and Scotty slinks back to the Hallway's growing noise, still displaying no expression.
*

He is age 33 and so he is among a younger generation of educators who constantly have heard that they are falling short, ever since they began their careers. National commentators and politicians be they conservative or progressive, may disagree on most other issues. But when it comes to public education, they are virtually unanimous when they speak of 'failing schools' and describe how American students grade near the bottom on international standard tests.

Anyone acquainted with a teacher or two nowadays knows that most of them bristle at how the larger society views them. They react in various ways, but by and large they feel they aren't being given a fair shake.

Garcia is in the rare position of having received some major positive strokes. He reaped a Crystal Apple Award from The Saginaw News, and now he is Wal-Mart's Michigan Teacher of the Year. Both involved nominations from his students.

He is proud of the honors, while at the same time he wishes to share them with others. He speaks of his Swan Valley teaching peers, whom he describes as 'mentors' before he speaks of himself.

"Shelly Foy knows how to reap a perfect blend of love and respect.  Matt Jacobs' is amazing at making connections with the loners, the kids who fall between the cracks.  Roger Trombley is a veteran who stays involved in everything at the school and behind the scenes."
By the time he is done, it seems that he has mentioned every adult in the building.

Garcia will note that some state test standards are ratcheted so high that even college students can't pass them. Still, for the most part, his answer to general criticism of today's education system is to do his personal best within the smaller world of Swan Valley schools.
He coaches sports teams and even lingers on evenings to attend games of the other squads. He is a chaperone at dances. He decided, even without experience, to direct an annual student play. He organizes class trips to Washington, D.C.

"I believe the support from the parents is still there," he says, "but a teacher has to reach out and get it. I'll speak to a parent or a student anytime, or take phone calls anytime."

"This is much more than academic," Peterson says. "He always instills discipline and respect, and they come back to talk to him about their personal lives. He makes that kind of an impact."
*
Despite his awards, Garcia describes himself as a work in progress. "I will always emphasize respect and discipline, but when I look back to when I started, I was too much about punishment and not enough about motivation," he says.

"I was so much into the discipline that for the first nine weeks, I didn't smile one time. In a parent review, one parent wrote,  'My daughter says you are an ogre'.  That was not an honest portrayal of myself, and the students are looking for honesty, and so now I no longer say it's my way or the highway. My approach now is to ask the kids what they can do to help me out, to explore how we're going to get this done together."

Not that Garcia's gone soft. Members of a second-hour group who face a math test are quiet even before they enter the door. He instructs them to shift their desks to 45-degree angles and to place their folders as shields, a pair of methods to prevent wayward eyes from viewing a neighbor's exam responses.

At the same time, he shows trust by distributing 20 calculators without requiring his pupils to sign up for them.

Garcia calls upon one front-row occupant to pass out the test questions and another to deliver the answer sheets. The exam begins and the proverbial pin could drop.

Midway through, he suddenly dictates, "Hands up." Pupils instantly place both hands behind their ears.

Is a lecture to follow? No. Mr. Garcia tells them that he is catching up on a computer program that allows parents on-line to view their children's progress, and he apologizes for any inconvenience this may have caused.

Five minutes later, another 'hands up'. This time, modest Mr. Garcia tells them that he made a poor choice by including Question 23, and that they need complete it only for extra credit.

About two-thirds of the students finish on time, while one-third are caught by the bell. Garcia directs those one-third to write 'not finished' at the top of their papers. All is not lost for them. Again he mixes discipline with motivation.

"Everyone pick up at least one piece of paper from the floor before you go," he asks, and indeed there are some scraps that result when pages are torn from notebooks.

"I wouldn't be me if I didn't bug you now and then," he concludes on a lighter note.

Garcia lives in Bay City, his birthplace, with his wife, Lori. She wasn't just his high school sweetheart, but earlier his junior high flame. They met in Huntington, Indiana, 20 miles from Fort Wayne, where his family had moved for a few years.

Lori teaches at Bay City's Kolb Elementary School, and they have two girls of preschool age.

He says he 'treasures' his spouse and children, and that his parents, Robert and Lucy Garcia, are 'amazing.' He adds that he had 'outstanding' teachers all the way through school. Still, he says he lost his way at times during his teen and young adult years.
"I was a troublemaker and class clown," he recalls.

As a left-hand baseball pitcher, Garcia won an athletic scholarship to the University of Indiana, Purdue University at Fort Wayne, even though his high school manager had warned the college coach that his attitude would make him "a cancer to the team."

His hope of advancing in baseball ended with a devastating injury to his pitching arm. He previously had knee cartilage ripped apart, and his shoulder was banged up.

"First I went through the feel sorry for myself’ stage, and then I decided that I wouldn't let my injuries end my life," he says.
He buckled down and returned home to finish his college studies at Saginaw Valley State University. He put in time at Swan Valley Middle as a student teacher and as a long-term substitute. He said he quickly felt 'at home' to the point at which he turned down more lucrative offers from other districts. Eventually he landed a full-time post at Swan Valley Middle, teaching math and physical education.

The lessons of Garcia's wayward years emerged last year when school administrators endorsed his proposal to create PRIDE, which stands for Perseverance, Respect, Integrity, Discipline and Excellence. "We took in 17 of the students with the biggest problems in terms of misbehavior and academics," Garcia says. "It was a motivational class. By the end of the year, 15 had improved their grades."

During a class break, one of this year's PRIDE students reports for a private one-on-one with the teacher. This is in the aftermath of a major disciplinary incident.

The adolescent, in sulking rebellion, answers that he is sorry because he got caught.

"Let me level with you," Garcia tells the boy. "A year ago, I thought you were on the right track. Now I feel you are going in a different direction. First think of your Mom, she loves the heck out of you. And if you write down the things you are doing wrong today, one day you will look back and feel that you were the biggest idiot in the world."

Ten minutes later, Garcia is in his element: Gym class. Boys and girls in the co-ed format know what is expected and are running laps even before he arrives.

"Of the 32 we had last year, 31 ran a mile in less than nine minutes before we were finished," he comments.

The youngsters gather for calisthenics, and then go through some sprints. Garcia focuses on exercises and drills, rather than competitive games.

"There is no need to send a small girl in glasses out there to get her shot blocked in a basketball game," he explains. "In my class, it doesn't matter who is the best player."

His own athletic injuries caused him to explore a different form of muscle training. He says adolescents and adult beginners should grapple not with gym weights, but with resistance from their own body weight. He has prepared a 45-minute video for what he calls 'The SMART Challenge', narrating with the charisma of a professional announcer. He intends to market the video nationally.

Students during this particular class are facing a different sort of challenge. They are standing on black rubber mats with five small white circles, plotted the same as on a dice or a domino. Their assignment is to jump quickly to the spots with various moves. With five white spots and only two 'foots' per student, it's tough.

Scotty, the PRIDE student from the early morning meeting, is struggling but he's starting to get the hang of it. He's working harder than he might have imagined four hours earlier, with his cheeks getting pinker and pinker from exertion, and Mr. Garcia makes sure to take note.
"Good job, Scotty," the teacher says simply.