Senior RB Deon Sanders leads the Vikings with 9 carries for 102 yards, including a 61 yard TD run.... 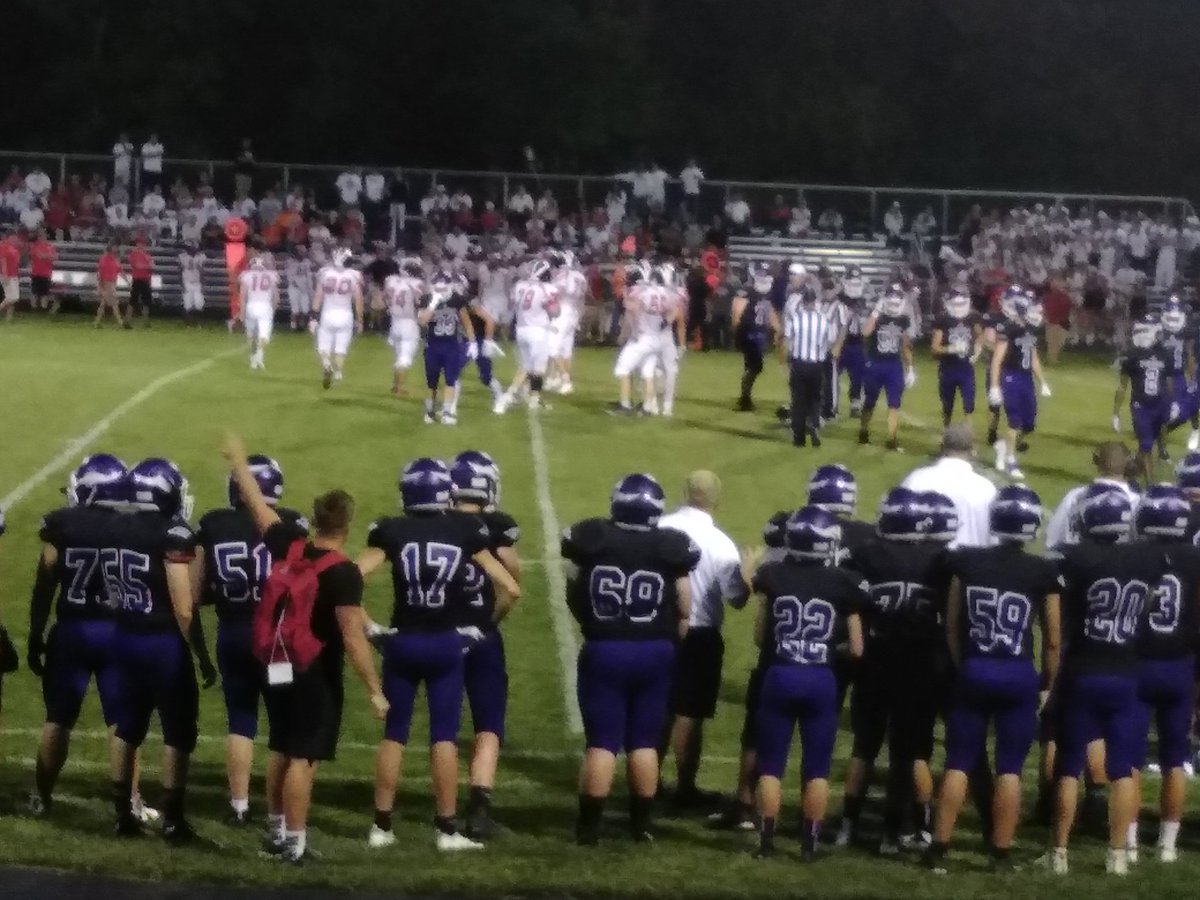 Shields, MI:
The 2017 MHSAA division 5 finalist Saginaw Swan Valley football team opened the 2018 season with a 21-12 victory over Cedar Springs High School, a division 3 football team from the Grand Rapids area, at Swan Valley High School in Shields, MI tonight.
With a 14-12 lead late in the fourth quarter, Swan Valley put the game out of reach when senior quarterback Alex Fries found junior wideout Ethan Champney in the corner of the end zone for a 10-yard passing TD, as senior kicker Ashton Pearsall split the uprights to give the Vikings a 21-12 lead it would not relinquish with 4:46 left to play.
Swan Valley head coach Kevin Gavenda isn't happy watching his team commit costly penalties, nor does he like to see his team turn the ball over; two things the Vikings did early tonight, however, it's never been about how you start, it's about how you finish, and Gavenda was happy with his team's second-half resolve tonight.
“I liked the way we battled through some adversity,” Gavenda said. “You don't turn the ball over three times and usually win, you don't make six or seven penalties that are costly and still win, you don't play with ten guys on the field five times and still win, usually. But mentally, they focused and they hunkered down and played better in the second half.”
The Vikings had fumbled the opening kickoff, turning the ball over to the Redhawks on the first play of the game, but Champney showed up to play on both sides of the ball, sacking Redhawks' QB Kolby Swank four yards deep in the backfield on third down to force a Cedar Springs punt, which sailed out of bounds on the Viking 39-yard line, setting up an explosive 61-yard touchdown run by Swan Valley senior RB Deon “don't call him primetime” Sanders two plays later, as Pearsall kicked the extra point for a 7-0 Viking lead with 9:29 left in the opening quarter.
Sanders was a Viking workhorse on both sides of the ball tonight as well, toting the rock 9 times for 102 rushing yards, while adding 5 tackles (including 1 tackle for a 4-yard loss) on defense.
“Deon's a tuff kid, and he's a great kid,” Gavenda added. “We challenged him all off-season (telling him) you've got to run tougher, you've got to be tougher, and he ran tough tonight. It's one of those things where we had to keep giving him breaks, because he's playing full-time on defense, getting starter's minutes on defense while getting starter's minutes on offense, too. But yeah, we were definitely happy with Deon's performance.”
A string of Viking penalties in the second quarter would give Cedar Springs the ball deep in Swan Valley territory, as Swank rushed 3 yards into the end zone on a quarterback keeper, but the 2-point conversion failed, while the Redhawks managed to cut the Swan Valley lead to 7-6 with 2:23 left in the first half.
The stout Viking defense went right to work, stopping the Redhawks early in the third quarter, as Sanders immediately broke off a 19-yard run, followed with 4-rushes by Fries, totaling 30 yards to push his team deep into Cedar Springs territory, before Fries eventually broke through the goal line with a 1-yard TD run, as Pearsall kicked the extra point to give the Vikings a 14-6 lead with 3:38 to play in the third quarter.
“You get that cover-two look and it's a matchup thing,” Gavenda said of the Redhawks defensive look. “They're playing two safeties at fourteen yards and the corners are bailing, you're just daring us to run, so that's what we're going to do. We told (Alex) at half time that we were going ride him in the second half, and that he was going to run the ball more, and throw the ball less. He was the one kid we had with fresh legs.”
Cedar Springs, however, had no intentions of rolling over, as Redhawks junior Ben Shaw managed to give his team a big boost, returning the ensuing kickoff 42 yards down to the Swan Valley 37-yard line, which would eventually set up another TD run by Swank (from 1-yard out) as the 2-point conversion failed for the second time, cutting the Vikings' lead to 14-12 with :33 seconds left in the third quarter.
Swank completed 6 of 9 passes for 53 yards with 2-interceptions, while rushing 6 times for 23 yards, adding 2 rushing TD's to lead the Redhawks. Cedar Springs senior fullback Ryan Ringler carried the ball 19 times for 65 yards, along with 2 receptions for 15 receiving yards, leading the defense with 7 tackles, while senior Ethan West added 15 carries for 49 yards, along with 1 reception for 9 yards.
Sanders had 9 carries for 102 yards, including his 61-yard TD run, along with 5 tackles on defense to lead the Vikings, while Fries was 3 of 10 through the air for 37 yards passing, with 1 passing TD, adding 12 carries for 43 yards, including a 1-yard rushing TD on the ground, followed by Champney with the 10 TD reception, along with 7-tackles and 1-interception on defense.
Swan Valley senior Terryon Liddell had 4 carries for 29 yards, along with 1 reception for 17 yards, adding 3 tackles on defense, while senior Brock Leinberger had 3 carries for 23 yards, adding 3 tackles on defense, followed by fellow senior Matt Pike, who had 2 carries for 8 yards, along with 1 reception for 10 yards, adding 6 tackles on defense. Viking senior linebacker Mitchel Boehler led the Swan Valley defense with an impressive 16 tackles.
The 2018 MHSAA early season schedule does not get any easier for Swan Valley, who will now prepare to host TVC east powerhouse Frankenmuth (who beat Bay City Central 35-17 earlier tonight) in a TVC conference crossover matchup right back here at Swan Valley high school at 7 pm next Thursday night, while Cedar Springs will host Caledonia HS at 7 pm at home next Thursday as well.
Swan Valley players line up to shake hands with Cedar Springs following a 21-12 opening night home win: