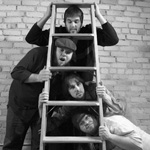 Following a year of renewal in 2008, Sprout plans once again to tackle yet another monumental piece of recorded historical depth.

Last January's tribute to The Band with a performance of The Last Waltz brought Sprout to another level as they spread their musical good will across the Tri-cities. By inviting members in their brotherhood of local musicians to join them for the evening's festivities, they upped the ante conceptualizing what The Last Waltz was all about. What amassed was a near sold out Pit & Balcony Theater in Saginaw, packed with music fans that 'got it.' People who wanted to see the classic '70s concert film come to life in 2008, as well as people who have never experienced Sprout, let alone a performance of The Last Waltz in full-on jamming glory were handed a Class A production.

This year on Valentine's Day night, Feb. 14, and for a matinee on Sunday, Feb. 15, Sprout is pulling out all the stops for by performing The Beatles 'White Album' and once again getting by with a little help from their friends.

"After doing The Last Waltz, we had such a good time and it got such a good response, we wanted to do something else," said keyboardist Justin Weisenbach, over a phone interview last week. "It was a tough decision, there are so many good albums out there, but the 'White Album' really stood out to us." Good thinking, seeing as December marked the 40th Anniversary for the epochal release of The Beatles' only double-album.

"We were thinking the next biggest thing we could do, something that is really monumental as far as influences for us go - plus everybody loves the Beatles," added guitarist/vocalist Aaron Johnson, also during a separate phone interview.

While a high percentage of music lovers will know the Beatles and most likely 'The White Album', a smaller percentage may be aware that another jam band, Phish from Vermont, also covered the same album on Halloween night, 1994 in Glen Falls, New York. The widely distributed show caused a musical frenzy in early Internet days and got the band major print for their effort.

"It wasn't easy with Phish having done it," stated Weisenbach. "There's that whole covering or doing something that bands have already done (which is generally off limits), but it's such a favorite of all of ours it didn't really matter.

"Iwas kind of on the fence about when we first started (talking) about the 'WhiteAlbum'," said Johnson. "I love Phish, they are one of my favorite bands. Itkind of gave me an idea (to) put this thing together and really, really put alot of ideas into it and see what we can do - if we can get an awesome teamtogether. That's really what this is about. Getting a team together that worksreally hard on their own pieces and make a masterpiece (together)."While the 'White Album' showcased another heavily transitional period for theBeatles as time went on, the disc or vinyl sounds as brilliant now as it didthen.

"It's so different from the other stuff that they were doing and it's such asignature album," said Weisenbach. "We also thought it would be good becausethe Beatles are (a group) that a lot of people like, from young to old.

Work has already started in providing more of a visual in terms of backgroundvideo footage, than the band did for The Last Waltz.

"There's a whole lot going into it, because Aaron went crazy with the wholeidea," Weisenbach informed. "He wants to put together a video and stuff for thebackground for a bunch of the songs. So we've been recording videos for a whilenow.Mike (Wardynski,percussionist) has a bunch of video recording stuff and has a studioand has a bunch of toys. He's been doing a lot of filming and editing.

"As far as the music goes, we have the complete score of all their music. Wedidn't have that for the Last Waltz and it's been a blessing.Loren Kranz,guest keyboardist/vocalist andarranger) actually had to write out the horn parts for the Last Waltz. That wasa big undertaking for him to figure it out from ear and transpose it."

"We got Mel from theThunderchickenscoming out and all the guys fromCornpone," said Johnson. "I think we haveeight horns coming in from SVSU," added Weisenbach. "There are a couple ofsongs where there's like two guitar players.Ray (Torres, Holy Gunguitarist) is going to come out. Wewere trying to get more local musicians, ones that didn't make it to the LastWaltz. As far as a full practice with everybody, we probably won't be able todo that until the week before if we're lucky."

Having a matinee comes down to the fact that there would have been twice theamount of people at the Last Waltz event if the timing were right.

"Wealmost sold out the Last Waltz and we would have probably have gotten rid of somemore tickets—there were people that couldn't make it on that (particular) day,"said Weisenbach. "Plus we have a lot of families that are fans and friends andit's hard to bring a kid out to a show that is at 8:30 at night. So we decidedthat we were going to do a matinee so that we could gear it towards everybodyand give everyone a chance to see it. We're doing Saturday at8 o'clockand Sunday at4 o'clock, Valentines Day and the day after.That's another reason we did it at 8 (on Saturday) instead of 7 or 7:30, sopeople could go out to dinner and do whatever they're going to do and thenmaybe make a whole night of it."

Ticketsare available in many locations."We're selling them on our website through Paypal," said Weisenbach. "You canget them at any Sprout show, you can get them at theDrive Through PartyStoreon Gratiot(Saginaw). Also at thePit&Balconybox office, but you have to go there. They are notselling them over their web site."

Sprout'sdebut CDWhen The Silence Breakswas released last June. After this spring,Sproutis planning to head out west ontour for the first time.

"We got a lot going on right now," Weisenbach shared. "I actually just startedbooking for our summer tour. We're tossing around the idea of moving out tonorthern California next summer and it's looking pretty good right now. Sowe're going to take a tour out west, leaving July 4. We're going to play the(annual Saginaw) 4thof July show and that will be the first showand then we'll be back after the week of the 8thof August. I havelike seven shows that (are confirmed). But we are already thinking about thenext (big cover show). Depending on the success of this one, we are going to doanother one this year and start doing two a year."

"We'regoing to be doing a lot of stuff with the video," added Johnson. "The nextthing we do at Pit&Balcony is going to be our own original production. Iwant to take the same production energy, horn section, video, get some peopleto sit in with us and doing something for our own original stuff. I am thinkingprobably fall. We've got a lot of ideas brewing. The next cover thing willprobably be Halloween."

Thegood fortuneSproutendured throughout 2008 will sprinkle well into the new year."I think the thing that was so good about (the Last Waltz) was that successwasn't expected," said the keyboardist. "It was like we didn't reallyadvertise, we had just gotten (our gear) ripped off, we were down and out andthen all of a sudden…" he said fading, "that wasexactlywhat we needed at that point intime. That lit the fire again. That was great, the feeling and the energy. Whenyou get the crowd that really understand, like in a live show where you'redoing jams and original stuff that they are so much part of the show too. When(the audience) get into it and get going, the musician's feed off of that andit can build and build so much. It's such a great thing."

"It's all the result of having a team, having people that want to help becausethey want to see a good production come out," added Johnson. "They believe inthe band and they want to help make this thing happen. Those are the people whoare going to be part of the road team when we go. I have a strong feeling, youknow. It's what counts because people are what is important."