The loss capped an exhausting five game road trip for the Spirit, who hope to get back on track with home games tomorrow and Sunday..... 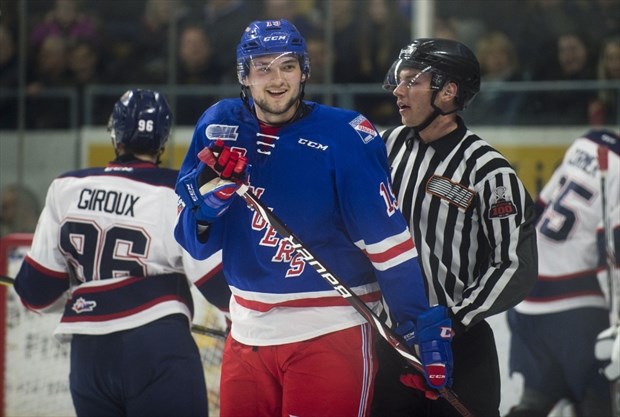 Kitchener, ON:
After falling behind 3-1 early in the first period, the Saginaw Spirit (23-18-4-0) had difficulty recovering in the final leg of a grueling five-game road trip, eventually dropping a 6-2 decision to the Kitchener Rangers (32-14-2-0) at the Kitchener Memorial Auditorium in Kitchener, ON tonight.
The Spirit struck first, taking the early lead when rookie Ryan Stepien (6) scored his sixth goal of the season with assists coming from Max Grondin and Hayden Davis for a 1-0 Spirit lead at 1:54 of the first period.
Just over 3-minutes later, former Flint Firebird, Kole Sherwood (18) evened the game at 1-goal apiece, beating Spirit goal tender Evan Cormier for his eighteenth of the season from newly acquired weapon Logan Brown and Adam Mascherin at 4:53 of the first period, before second year Rangers' forward Eric Guest (5) gave Kitchener a 2-1 lead with his fifth goal of the season from Jack York and Jonathan Yantsis at 6:18 of the opening period.
Kitchener extended its lead to 2-goals just past the midway point of the first period when Riley Damiani (16) scored his sixteenth of the season, giving the Rangers a 3-1 lead at the 13:00 minute mark of the opening period.
Spirit forward Damien Giroux was called for closing his hand on the puck just over 6-minutes into the middle frame and Sherwood (19) made the Spirit pay with his second of the night, a power play goal from Sherwood's favorite new acquisition, Brown, as well as Mascherin again to open up a 4-1 lead at 7:08 of the second period.
Mascherin (31) would give the Rangers a 5-1 lead with his thirty-first goal of the season with assists coming from Sherwood and Kitchener goal tender Mario Culina at 3:13 of the third period.
The Spirit responded when former Ranger Mason Kohn (13) scored his thirteenth goal of the season from Nicholas Porco and Cole Coskey, cutting into the Kitchener lead (5-2) at 6:53 of the third period.
Things continued to go downhill for Saginaw later in the third when the Spirit-killer, Sherwood (20) capped off another big night against the Spirit with a hat trick for his twentieth goal of the season from guess who, Mascherin and Brown yet again, to give Kitchener a 6-2 lead at 16:52 of the third period.
Cormier stopped 25 of the 31 shots he faced in net for the Spirit tonight, while Culina turned away 31 of the 33 Saginaw shots he would see in between the pipes for Kitchener.
The Spirit will look to get back on track tomorrow night when the Windsor Spitfires visit for a 7:05 pm game to kick off Ice Blast weekend, before the Spirit welcome the Soo Greyhounds for a 5:30 pm game on Sunday afternoon.
Miscellaneous   Rock   Rap/Hip Hop   Country   Jazz   Blues