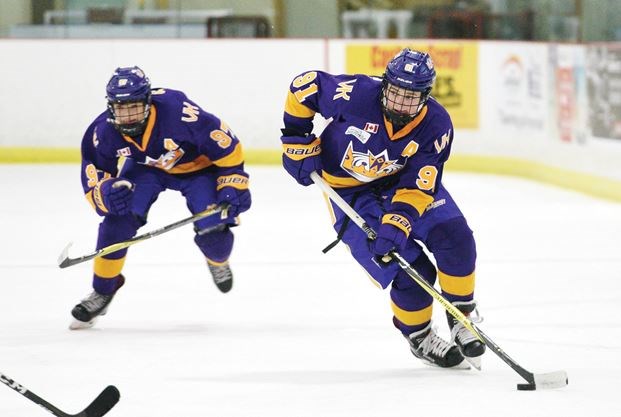 The Saginaw Spirit had a very productive 2018 OHL priority selection draft Saturday, getting the No. 2 overall ranked player, along with the No. 1 goal tender in the draft with the first two selections.
With its top first round pick (No. 5 overall) the Spirit selected 5-foot-8, 171-pound, left-shooting forward Cole Perfetti from the Vaughan Kings of the Greater Toronto Hockey League (same team as Saginaw's 2017 top pick, Nicholas Porco) where Perfetti registered an impressive 125-points (52-goals, 73-assists) in 64-games for the Kings this year.
The Whitby, ON native also added 10-points (5-goals, 5-assists) in 7-games at the 2018 OHL Cup Showcase, before moving up to finish out the season in the Ontario Junior Hockey League, where he had 6-points (2-goals, 4-assists) in 5-games with the Whitby Fury.
Scouts believe Perfetti (who has verbally committed to play NCAA hockey for the University of Michigan) could instantly be a top 6-guy who also contributes on the power play in the OHL, where his game is much better suited for its style and pace of play. His biggest strength is his hockey sense, which is off the charts, as is his ability to make others around him better.
In an attempt to fill the void left after former Spirit goal tender Evan Cormier (a fourth round pick of the New Jersey Devils in the 2016 NHL draft) had aged out of the league, the Spirit used its second pick to draft 6-foot-2, 179-pound goal tender Tristan Lennox in the second round (26 overall) of the draft, where he was considered the No. 1 goalie prospect by multiple scouting services after putting up a 1.91 goals against average, and .915 save percentage for the Mississauga Reps in the GTHL this year.
Lennox, a 15-year old Mississauga, ON native, will compete with Cam Lamour for the starting goal tending job in Saginaw next year.
Scouts say Lennox track's the puck very well, has exceptional lateral movement, and is like a third defenseman with his puck-handling ability when outside of the crease area. His preparation and mental toughness are as good, if not better than any other goal tender in the draft.
The Spirit used its third pick to take 5-foot-9, 157-pound forward Ethan Cardwell in the second round (33 overall) from the Clarington Toros of the Eastern AAA Hockey League.
Cardwell, a native of Courtice, ON (who has dual citizenship in the U.S. and Canada) is another highly skilled prospect who has a strong hockey pedigree; which began with his grandfather Steve, who played for the Pittsburgh Penguins in the NHL, while his father Justin, played NCAA hockey at Western Michigan University in Kalamazoo, before a semi-pro career, and uncle Matt, who played collegiate hockey in Canada, prior to a semi-pro career.
Scouts consider Cardwell a 200-foot forward with exceptional awareness, and an accurate shot, who uses his great vision to pick apart the defense, and can be trusted to make an impact by winning face-off's deep in the defensive zone late in games. He had 54-points (30-goals, 24-assists) in 35-games for the Toros last season.
With the fourth pick, the Spirit selected 5-foot-10, 182-pound, LW Sebastian Bulovs in the fourth round (65 overall) after registering 17-points (11-goals, 6-assists) in 25-games, adding 69-penalty minutes for the Mississauga Senators in the GTHL; along with 3-points (1-goal, 2-assists) in 4-OHL Cup Showcase games last year.
The 15-year old native of Brampton, ON has exceptional speed, elite stick handling ability, and great offensive instincts, but will need to work on his gaps, while becoming more active in the defensive zone in order earn quality minutes at the OHL level.
With the fifth pick, the Spirit drafted just the second hometown prospect (after Brad Walch 2007) in the history of the franchise, selecting 5-foot-9, 163-pound puck-moving defenseman Mitchell Smith in the fifth round (84 overall) after Smith totaled 41-points (6-goals, 35-assists) in 51-games for the Oakland Jr. Grizzlies in the T1EHL last season.
Smith, a 15-year old freshman at Heritage High School in Saginaw Township, has also verbally committed to play NCAA hockey at the University of Michigan. He's a puck-possession defenseman, who can facilitate the rush into the zone, which draws comparisons to former Spirit defenseman Marcus Crawford, so much that Saginaw GM Dave Drinkill said he can eventually see Smith quarterbacking the Spirit power play in the future, like Crawford did this year.
Below is a complete list of the entire 2018 Saginaw Spirit draft class:
Rnd - Pick - Player    - 2017-18 team
1st – 5th – Cole Perfetti (Vaughan Kings)
2nd – 26th  – Tristan Lennox (Mississauga Reps)
2nd – 33rd –  Ethan Cardwell (Clarington Toros)
4th – 65th  – Sebastian Bulovs (Mississauga Senators)
5th – 84th – Mitchell Smith (Oakland Jr. Grizzlies 16)
6th – 105th –  Ian Lemieux (York Simcoe Express)
7th – 136th – Carter Mazur (Detroit Little Caesars)
8th – 145th – Kienan Draper (Detroit Little Caesars)
10th – 185th – Ty Roberts (Vaughan Kings)
11th – 205th –  Isaac Sooklal (Whitby Wildcats)
12th – 225th –  Lachlan Getz (Mercer Chiefs)
13th – 245th – Ryan Vellucci (Carolina Jr. Canes )
14th – 265th – John Opilka (St. Louis Blues AAA)
2017-18 Spirit leave the ice after losing to the Soo: