the Spirit finish the series having won 7 of the 8 meetings with the Firebirds this year.... 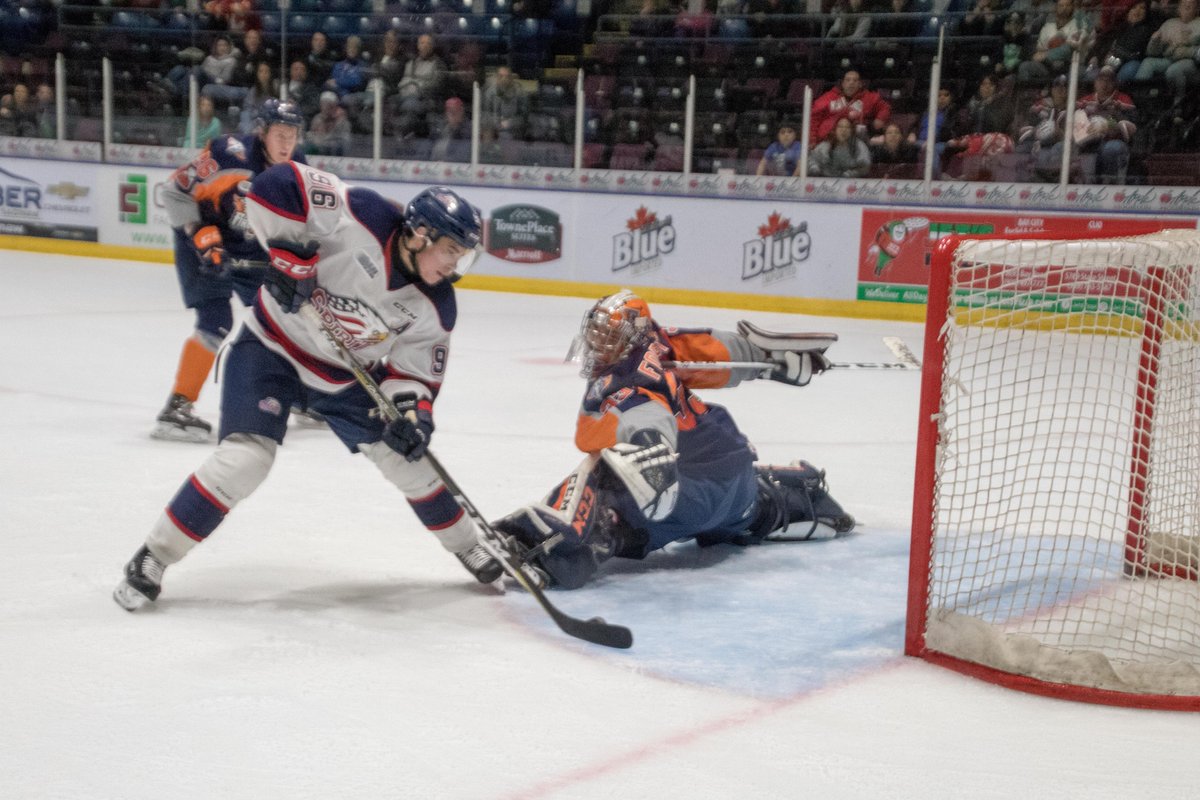 Flint, MI:
The Saginaw Spirit (27-20-8-0) scored four third period goals, wrapping up the final game of the 2017-18 Coors Light I-75 Divide Cup Series with a 5-3 victory over the Flint Firebirds (16-34-3-2) in front of 4,087 fans at the Dort Federal Event Center tonight.
With tonight's victory, the Spirit complete the series having won 7 of the 8 meetings with Flint this year.
Spirit forward Jake Goldowski (9) broke a 3-3 tie with his ninth goal of the season, the eventual game winner for a 4-3 lead with assists coming from Blade Jenkins and Mason Kohn at 11:49 of the third period.
Just when Flint had pulled goal tender Luke Cavallin, the Firebirds were also whistled for a tripping penalty with just under a minute-and-a-half left in regulation, opening the door for Spirit defenseman Marcus Crawford, who sealed the win with an empty net power play goal with assists from Damien Giroux and Kohn for a 5-3 lead at 19:42 of the third period.
The Spirit had wasted little time taking an early lead when rookie sensation Blade Jenkins (17) scored his seventeenth goal of the season from D.J. Busdeker and Giroux for an early 1-0 lead just :28 seconds into the game.
Saginaw held a 1-0 lead heading into the first intermission, but Flint would even things up early in the middle frame when Jake Durham (7) scored to tie the game at 1-goal apiece at 3:58 of the second, while the score would remain tied 1-1 for the remainder of the second and into the second intermission.
The Spirit pulled ahead early in the third when Giroux (17) scored his seventeenth of the season from Busdeker and Jenkins for a 2-1 lead at 3:36 of the final period.
Just 34-seconds later, Kohn (17) followed with his seventeenth goal of the season with an assist coming from Kyle Bollers, extending the Spirit lead to 3-1 at 4:10 of the third period.
Flint, however, would not go away quietly, when Jalen Smereck (9) scored a power play goal for his ninth goal of the season to cut the Spirit lead to 3-2 at 6:54 of the third period.
Less than a minute later, Firebirds' RW C.J. Clarke (14) would score his fourteenth goal of the season to tie the game at 3-goals apiece at 7:46 of the third period.
Saginaw goal tender Evan Cormier stopped 29 of the 32 shots he faced in net for the Spirit, while his counterpart, Cavallin, turned away 30 of the 34 Spirit shots he saw in between the pipes for Flint tonight.
The Spirit now have a chance for revenge from Friday night's loss to Sarnia with a quick turnaround trip to the Progressive Auto Sales Arena in Sarnia ON where they will take on the Sting at 2 pm on Monday afternoon.