Jake Goldowski scored a penalty shot goal and a power play goal for the Spirit... 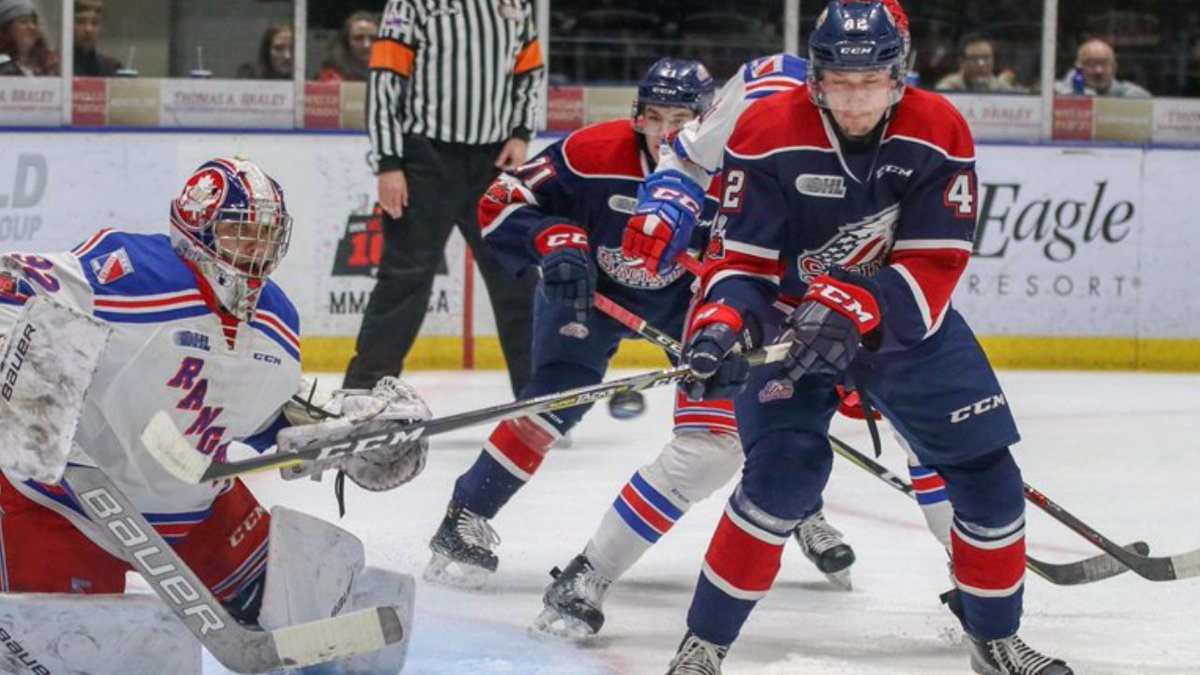 The Saginaw Spirit (24-19-4-0) gave up three early goals in the first 4-minutes, and fell behind (4-1) after 20-minutes in a forgettable first period, however, this gritty Spirit team would not quit, battling back to out-shoot the top team in Junior hockey 20-4 in the middle frame, before eventually dropping a 5-2 decision (after relenting a late empty-net goal) to the Sault Ste. Marie Greyhounds at the Dow Event Center Sunday afternoon.

Despite the slow start, Spirit head coach Troy Smith was very satisfied with how his team responded to the adversity, facing a team stacked with NHL talent.

“We had a really bad start, a bad four minutes that cost us,” Smith said. “You have to start on time, but I was extremely proud of the next fifty-six-minutes. You know, we competed hard right to the end, didn't really get any bounces, but against a team like that there's a lot of positives to take out of tonight.”

The Greyhounds got two quick goals; the first from Tim Gettinger (28) just :53 seconds into the game, and another just 36-seconds later from Morgan Frost (28) at 1:29 of the first period, jumping out to an early 2-0 lead, before Hayden Verbeek (17) made it a 3-0 game at 4:07 of the first period, chasing Saginaw goal tender Cam Lamour, who was replaced by Evan Cormier.

Spirit forward Jake Goldowski (7) was dragged down on a breakaway and was awarded a penalty shot, where he beat Soo goal tender Matthew Villalta (a third round pick of the Los Angeles Kings, 72 overall, in the 2017 NHL draft) with a quick-release snapshot on the short side to cut into the Greyhounds' lead (3-1) at 4:49 of the first period.

Goldowski, a Scranton/Wilkes-Barre, PA native, feels the points are starting to come, now that he's getting used to the skill level of OHL hockey, and especially after scoring the final two goals in yesterday's game with back to back power play goals, before his penalty shot goal, along with another power play goal today, giving him the last four goals for the Spirit.

I think it's just me adjusting to the league, Goldowski said. “I kind of struggled at the beginning of the year, (I) wasn't really putting up a lot of points, but I'm starting to adjust now and things are really starting to come along.”

Just 14-seconds after the Goldowski penalty shot goal, Soo rookie RW Ryan Roth (11) scored his eleventh goal of the season at 5:03 of the first period, giving the Greyhounds a 4-1 lead heading into the first intermission.

After being out-shot by the Soo (15-10) in the opening period, the Spirit came out and dominated the middle frame, out-shooting the Greyhounds by a whopping 20-4 margin, while taking full advantage of a 2-minute tripping penalty to Soo defenseman Anthony DeMeo midway through the period, when Goldowski (8) converted a power play goal to cut the Soo lead in half (4-2) with assists coming from Blade Jenkins and  Marcus Crawford at 10:28 of the second period.

Smith pulled Cormier for the extra attacker, but newly acquired Soo forward Taylor Raddysh (a second round pick of the Tampa Bay Lightning, 58 overall, in the 2016 NHL draft) ended up with the puck on his stick with 11-seconds left in regulation and a clear look at a wide open net, where he quickly deposited the puck to round out the scoring (5-2) at 19:49 of the third period.

After replacing Lamour, Cormier stopped 18 of the 19 Soo shots he would face in his 53:10 in net for the Spirit, while Villalta turned away 41 of the 43 shots he saw in between the pipes for the Greyhounds.

The Spirit will have a much needed rest day on Monday and a practice Tuesday, before heading south for an I-75 divide cup matchup against the Flint Firebirds at 7 pm at the Dort Event Center in Flint, MI on Wednesday night.

Jake Goldowski scores a penalty shot goal for the Spirit against the Soo Greyhounds: