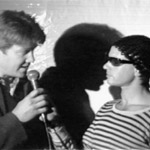 You got your good thing/

And I've got mine

Unless you were an avid follower of a certain cult new wave video show from the early Eighties, the name Peter Ivers is probably unknown to you. But here are some people you most certainly are familiar with:

They all considered Ivers a close friend and a significant influence in their lives.

Today, Ivers is almost forgotten except as the co-writer, with Lynch, of the haunting song "In Heaven" from "Eraserhead."

A quarter century after his tragic death, a new book finally shines a spotlight on Iver's life.

"In Heaven Everything is Fine: The Unsolved Life of Peter Ivers and the Lost History of New Wave Theatre" (Free Press, 2008) is really a hybrid of two stories.

The first is a pop culture biography of the immensely gifted and charismatic Ivers, tracing his roots as a campus luminary at Harvard in the late Sixties and his forays into music and video in Los Angeles before his brutal murder in 1983. The case remains unsolved.

After meeting Ivers' Harvard girlfriend, Lucy Fisher, a veteran film production executive today, Frank was told by his next contact, Peter's friend Steve Martin (not the comedian) "You're going to find out who this guy was and it's going to blow your mind. And it will make the loss of him that much more profound."

Reading "In Heaven", one gets the sense that Iver's friends (and so many described Ivers as "my best friend" it almost seems like a mantra) had been waiting for the day when someone would come knocking at their door, book contract in hand, wanting to know more about this almost forgotten pop culture figure who had played such a significant role in their lives.

So many writers, musicians and performers make the claim to cherish art above commercial success and fame, that it has become not just a cliché, but also a punch line. But as the authors point out, Ivers was the real deal. He walked the walk and talked the talk, with charisma, a genuine love and compassion for almost everyone who crossed his path, and a feverish dedication to his music.

A self-taught master of the blues harmonica, Ivers was scary brilliant on harp. In 1968 he took his then girlfriend, actress Stockard Channing ("West Wing") to see blues legend Muddy Waters.

As the authors recount: "At one point between songs, Waters gestured to Peter and began to speak about him. He recounted, with respect and affection, times they had played together in Chicago and Boston. Looking out over the small but devoted audience in the smoky room, Waters referred to Peter as 'the greatest harp player alive'."

Which makes it all the more tragic that he was murdered as he was poised on the threshold of breaking into The Game as a salaried screenwriter and soundtrack composer in Hollywood.

Frank and Buckholtz obviously did an incredible amount of research, not just into the life of their subject, but also into the gruesome murder that the police seemed content to view as a random act of violence in a seedy part of town.

Displaying the tenacity and relentlessness of a film noire private sleuth, the chapters devoted to their investigation reads like an episode of CSI. Unfortunately instead of Grissom and Co. confronting the killer in the third act, this tale plays out more like an epic Greek tragedy.

The impish Ivers hosted the program, introducing the nation to now legendary bands like Fear, The Circle Jerks, Black Flag and many others. Iver's whacked out stream of consciousness monologues from the show, which can now be found on Youtube, seemed like a hipster blend of Eighties coke fueled rants laced with James Joyce literary flourishes blended with Devo's irony. While Ivers was a yoga devotee and health nut, his scripts were written by the show's drugged out creator/producer David Jove.

Some of the show's most memorable moments were his wry ironic interviews with the bands, which always ended with the non-sequiter query "and what is the meaning of life". More than one drunk and/or stoned musician seemed dumbstruck by a question they had never before encountered in the club scene. When Fear front man Lee Ving was asked by Ivers another of his favorite questions, 'what do you hate least?" he shot back "not you." Very punk.

One night Ivers was joined on New Wave Theatre by his best friend from Harvard, National Lampoon magazine founder Doug Kenney. Kenney was fresh off the success of his first film "Animal House" (co-written with Lampoon friends Chris Miller and Harold Ramis).

Onscreen, Ivers said to Kenney, "You look like a successful guy. What does success mean to you?"

"Success" Kenney deadpanned, "means never having to say 'you're welcome.'"

Frank became interested in Ivers while writing a book about his favorite band, The Pixies, who used to perform "In Heaven" regularly on tour. In a recent interview with Washington D.C.'s Express Night Out magazine, Frank explained his fascination with Ivers.

"The more I found out about him, the more I was blown away at how he knew all the people I respect most in the world. And when I talked to these people, all they would say was how much they loved him, in a way that I never heard people talk about another person."

While most music fans will be fascinated by the book's vivid recreation of the L.A. punk scene and the late Seventies/early Eighties music and film scene of Southern California, the description of Iver's Harvard days is equally fascinating.

There is no doubt that every Harvard class has its fair share of future movers and shakers, but that particular era seems to have produced a noticeably exceptional batch of creative artists.

Iver's best friends were Kenney and theatre enfant terrible Timothy Mayer (who sadly would die of cancer a few years after Ivers and Kenney's deaths). Dr. Andrew Weil was then a brilliant future med student, making spending money dealing weed to his friends. Tommie Lee Jones, John Lithgow and Stockard Channing were some of the actors featured regularly in Mayer productions. Kenney and his Harvard Lampoon partner Henry Beard would take their college humor magazine national, making them millionaires within five years.

Two years ago, this reviewer wrote about Josh Karp's biography of the life and death of Kenney in "A Stupid and Futile Gesture: How Doug Kenney and National Lampoon Changed Comedy Forever." Its publication was greeted by Kenney's legions of fans and friends as a long overdue appreciation of his comic genius and gentle, compassionate nature.

"In Heaven Everything is Fine" accomplishes the same for the less famous but equally loved and talented Ivers.

The day before his murder, Ivers gave a book to a friend, who later found this inscription: "Every decision you make is a chance to be a hero."

By deciding to dedicate himself to telling the story of Ivers' life and death, Frank has shown us that biographers can be heroes too.

(To hear audio clips of Iver's music, or watch video clips of "New Wave Theatre" visit www.peterivers.com, a site created by Frank to augment his book. There is also a Myspace page made by Frank dedicated to Ivers and his music.)