SIGN of the TIMES: HABITAT FOR HUMANITY\'S Blitz Build Takes a Hiatus 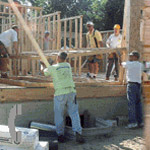 As Saginaw's economic struggles continue, one fact from the summer of 2008 tells the story in the simplest sort of manner.

Things are so bleak, at least right now, that Habitat for Humanity is not conducting its Blitz Build this year after erecting more than 130 new Saginaw County homes since 1987, most of them since the middle 1990s.

Instead, the Neighborhood Revitalization Project from July 25 to August 1 will focus on restoring up to 40 existing homes in a 15-block area north of Covenant HealthCare's main campus.

"The housing situation in this state is in a slump," explains Paul Warriner, Saginaw Habitat director. "Houses are coming back to lenders because people have lost jobs, or have left the state. In this environment, we did not feel we should be building new homes. Our first priority is to get families into homes and to make repairs before more become empty.

"We are not giving up on new construction. Our board plans to resume in 2009. Hopefully, this is temporary."

A handful of individual building projects will continue, such as Carrollton High School students erecting one home per year under devoted trades teacher Bill Dalton. Still, the local market is indeed in a big slump when new homes are not considered viable at $70,000, which has been about half-price because of donated labor and materials.

Review Magazine has reported that last year's creation of the Covenant Neighborhood Association (Archives: Politics/News 644) is making a major impact. Members have teamed on community cleanups, the hospital is paying to raze some of the worst eyesores, and City Hall is sharply expanding its demolitions. Resident involvement helped cause Habitat to pick the area for this summer's project.

Unfortunately, a negative offset comes from a national home financing crisis that is as severe in Michigan, and in Saginaw, as anywhere. The county had a record 1,073 foreclosures last year (Archives: Politics/News 648) and forecasts call for the count to escalate in 2008. Even Saginaw Habitat, with its strict standards and its comprehensive family counseling, has had 10 loans go bad.

Ed Blohm, Covenant Association vice-president, is a leader of the cleanup efforts. He plans to volunteer again later this month, even though his own family's long-time home on Durand is slightly outside of the first target area.

"This neighborhood still has affordable housing, and this is something worth saving," Blohm says.

Dawn Dickinson agrees. The single mother of two teen-agers is looking forward to porch repairs, along with new screens and gutters, for her home on North Bond near Cooper.

"We have been here for 18 years," she says. "I like being so close to the hospital, and having the parking lot security guards on hand. As other houses become abandoned, Covenant keeps buying them off and the area becomes a little more quiet."

Dow Chemical Company is the prime sponsor and will allow work release time for hundreds of employees to volunteer, in addition to giving the new energy-efficient small light bulbs to neighbors.

Not as Glitzy as a Blitz

Habitat leaders, as always, maintain the most positive possible outlook.

The Neighborhood Revitalization Project "is a little bit different sort of project, with an emphasis on keeping the housing affordable and keeping the neighborhood healthy," Warriner says.

"This doesn't have all of the glitz of a Blitz. We would probably get a lot more volunteers with a Blitz, more volunteers and more press coverage. We just finished up a rehab in Hemlock that took one month, done very quietly, and a family has already moved in. Rehabbing allows us to get into some other areas such as this."

Roger Scovill, Habitat board president and a veteran volunteer, is ready for the new approach.

"Either way, I look at this as contributing to the community," Scovill says. "Whether it's working on a brand new home or helping out a homeowner in an older house, that's great. We are going to make a whole 15-block area look great. We can have the same kind of impact (as a Blitz), but on even a bigger neighborhood with this kind of project."

He says he started learning home-repair skills as a Saginaw youth, under a father and grandfather who had Depression-era values for thrift and self-reliance. Then he joined Habitat and took his knowledge to a higher level.

"By no means would I consider myself a professional builder, but I have learned a lot about building a house, be it a deck or interior doors or roofing," Scovill says. "At Habitat, we will take someone who wants to learn, and we will work with them."

A family need not reside in the Covenant target area to receive Habitat's support for home repairs. Through a countywide effort, volunteers will provide free labor for families who purchase repair materials. For information, call Habitat at 753-5200.

Also, Habitat's ReStore at 315 West Holland near Panda House Restaurant is generating a surge of increased interest this year. Warriner reports that sales of used furniture, appliances and building materials have reached an average of $16,000 per month. This number is 754-9435.