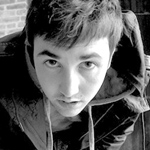 This is the first year the Review Music Awards included a Rap/Hip-hop category. While this area has always had a Hip-Hop scene, 2009-2010 saw a steady growth as new artists representing diverse backgrounds and styles revitalized the scene and took the area by storm.
Taking home three awards in the category, including Rap/Hip-Hop Artist of the Year, Mixtape of the Year, and New Rap/Hip-Hop Artist of the Year, was Midland’s Seth Patrick aka ill eaze.
Born Seth Patrick Dowling, Seth has been making hip-hop tracks since he was in high school, writing and producing his first EP on a cheap laptop in his bedroom. “I’ve been producing from my bedroom ever since,” he says. And that may explain the title of his EP, The Bedroom Rapper, which won Mixtape of the Year. The album draws on a wide range of influences, including a sample from indie outsider singer-songwriter Daniel Johnston, and can be downloaded for free online.
Though he has been writing and producing songs in his room for years, Seth has only recently taken to performing out, and has been happy with the response he’s received. “I started performing about a year and a half ago. I’m really happy I won—it’s good to be recognized for doing something I love passionately.”
However, Seth is quick to point out he has doubters. “Some [in the scene] feel I haven’t worked hard enough, or I haven’t been in the ‘game’ long enough, but the truth is I’ve worked very hard and I’ve been making hip-hop music for over a decade.”
For those who do appreciate what Seth does, they often cite his lyrical ability. “A lot of people relate to my lyrics and tell me that I have a distinct style all my own,” he says. He definitely recognizes writing as one of his strengths. In addition to writing songs, Seth writes poetry and short stories which he has published in various places.
Immediately coming off of the Awards, he is taking some downtime to create new songs, but he is looking forward to performing again. “I’ll come back probably mid-summer and begin performing again. I’m working with some new musicians and hopefully we can create something great.”