Saginaw History is an August Focus in More Ways Than One: Celebrating Saginaw\'s 150th Birthday 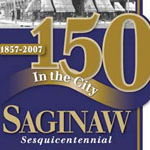 Saginaw city residents will make history during the first full week of August. Then they will celebrate history.

A widespread proposal to overhaul Saginaw's form of government, with an elected executive mayor and other City Charter changes, goes to voters on August 7th. The impact, one way or another, will resonate for years to come.
A celebration of the city's 150th Anniversary, known as the Sesquicentennial, follows on August 11th.

The Sesquicentennial, with a midday parade as the highlight, is being organized by a civic coalition that has put together an ambitious $89,000 budget.

August 11th is the big day, but events such as tours and seminars will continue for months afterward.

Events focus on many aspects of history: Native American heritage. Settlement by pioneers. East and West side relations. Lumbering. The automobile. Music.

Architecture. Even 19th century baseball. A schedule of highlights is at the close of this article.

Politics and government also are included in the longer-term Sesquicentennial activities, especially through interviews with former mayors such as Henry Marsh and Paul Wendler that eventually will air on the City's cable TV access channel.

Still, the history of Saginaw's form of government from the 1850s through the 1880s is difficult to trace. Even our leading local historians have a hard time putting an exact finger on precisely how government worked, other than noting that the county played a stronger role than nowadays.

To form a link between the August 7th City Charter revision vote and the August 11th Sesquicentennial, the best starting point moves forward to 1889. This is when the state Legislature ordered Saginaw City (West Side) to merge with East Saginaw. Since then, we have had three eras in the form of local government.

1890 to 1913 * Geographic rivalries were strong in the forced merger. Almost everyone feared that someone else, from some place else, would get an upper hand. The result was creation of 21 wards, with two City Council members elected from each ward. A mayor was elected citywide, but had limited powers.

First change, 1913  * Needless to say, a 43-member council had trouble functioning. If 43 were too many, how about five? Reformers won voter approval to really shake things up.

1913 to 1935 * The five elected commissioners each ran a specific operation. Departments were public works; finance; parks and cemeteries; health and safety; water and sewer. But the commission form of government also drew fire. Commissioners were accused of forming corrupt 'kingdoms' - awarding jobs and contracts to relatives and friends. (In one example that seems ironically humorous today, the public works commissioner was assailed for paying a wasteful 15 cents per gallon of gasoline, compared to less than 10 cents in Flint and Bay City.)

Second change, 1935 * Reformers decided Saginaw needed less 'politics' and more of a businesslike approach. Therefore it was business leaders, in cooperation with The Saginaw News, who gained voter consent for another sweeping change that is known as the council-manager form of government.

1936 to present * Using business metaphors, (1) The nine-member council is like a volunteer board of directors that oversees general policy, (2) The mayor is similar to the chairman of the board, with limited powers other than conducting meetings, (3) The city manager is like the CEO, the full-time pro assigned to carry out council policy.

Reformers during the 1930s followed a national council-manager model with strict rules that continue today. Neither the mayor nor the council is permitted to 'interfere' with how the professional manager handles day-to-day affairs or employee discipline. This provision is in theory, of course, and often a gray area has existed.

Furthermore, 'politics' was such a dirty word that the charter set elections in odd-numbered years, in order to avoid sharing ballots for U.S. president or Michigan governor. Saginaw council candidates do not label themselves as Republicans or Democrats.

Voting is citywide to prevent the perceived evil of ward politics. The mayor (chairperson) is appointed by the council (board) rather than elected by the public (stockholders).

Attorney Greg Schmid, main author of the proposed new charter in the August 7th election, says the 1930s reformers were not as pure of politics as they proclaimed. The nine men on the Charter Review Commission got their document approved and then ran for the new nine-man City Council, and all nine of them won.

Schmid describes this as self-serving. In contrast, if voters pass the new charter, Schmid and other 2007 reformers have pledged that they will not pursue council seats for the next three years.

Business interests controlled Saginaw politics from the 1930s deep into the 1970s, through a group known first as the Committee of 50 and then as United Saginaw Citizens.

A watershed election took place in 1977. With Sister Ardeth Platte winning from the left wing and Dr. Walter Averill from the right wing, independents gained a majority of seats for the first time. United Saginaw Citizens never fought back, because by then many of the business and professional people were starting to move out of the city. Saginaw during the past 30 years has had various mixtures on the council.

Greg Schmid and other advocates of a 'yes' vote on August 7th say the time to adopt a strong, elected executive mayor is long overdue. When no single faction controls the council, the power of the unelected manager is strengthened.

All nine council members have said they oppose the new charter, with varying degrees of intensity.

Backers of a 'no' vote say the existing system ensures selection of a city manager with professional credentials that an elected mayor possibly would lack.

Those on the 'yes' side answer that regardless, the mayor should be the peoples' choice and accountable directly to the people.

In the end, voters will make history one way or another on August 7th. Later in the week, the Sesquicentennial arrives.

Proceedings get a head start on August 10th with a downtown fireworks display at dusk. The sky show will follow Friday Night Live, Children's Night Out, at Morley Plaza next to the Temple Theatre.

Here is the schedule of events for Saturday, August 11th:

12:30 p.m.  * Concert of modern music, with historic themes, on the Courthouse lawn and/or at the adjacent Borchard Park Gazebo.

In the parade and at other sites, participants will see all sorts of antique cars and various displays that will bring history to life. Follow-up activities heading into fall will include tours of historic buildings. The Saginaw Humanities Lecture Series will follow a 150th anniversary theme. Public Libraries of Saginaw has prepared coloring books that depict such items at fire tugboats that roamed the river to battle blazes during the lumber era.

The group's website is saginaw150.com. Anyone who wants to take part in the parade may call Jeanne Conger at PRIDE In Saginaw, 793-5168, or e-mail her at info@prideinsaginaw.org for an application.

Anyone who wishes to contribute may send a check to the City of Saginaw Sesquicentennial Committee in care of the Saginaw Community Foundation, 100 South Jefferson, Suite 201, Saginaw, MI 48607.

The Art of Poetry: Visually Reminagining the Poem

Mommy Dances With The Devil: An Online Watch Party