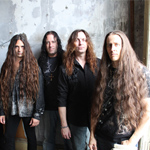 Another interesting note is that Reverence shot three music videos for the debut album, When Darkness Calls, all within the Tri-Cities, with local talent and crew members. The video for the song Too Late was shot entirely in the spaces above Jake\'s Old City Grill restaurant, on Hamilton Street in Old Town Saginaw. The aging interior of the rooms above Jake\'s were the perfect backdrop for the video. The video for the song, Bleed for Me, was shot at The Vault on Midland Street in Bay City. Visit ReverenceMetal.com for a link to the YouTube video. Also, a few corrections, the album, as a digital download, is $5.99 from ReverenceMetal.com, you\'ll pay $8.99 from Amazon, and $9.99, from iTunes, if I\'m not mistaken. The physical CD is $9.99 from ReverenceMetal.com.