Reefer Madness, or Pure Creative Genius? You be the judge.

Posted In: Arts & Entertainment, Theatre,   From Issue 643   By: Lauren Davis 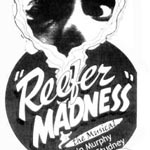 Back in the day, it was viewed as the scourge of teenage existence. It was reputed to make your spine curve, your belly button cave in, and to cause your grey matter to self implode.
Just go ask Alice, when she's ten feet tall.

The scourge, which would later switch gears, evolving into a plethora of far more potent and scary stuff, was originally just one simple substance: marijuana.

Aside from being the assumed forthcoming cause of Armageddon, and despite its prominence of title, "reefer", as it's also called, has been relegated to secondary as the subject of another brilliant work of the 303 Collective, a group of artists and performers who nurture alternative perspectives and encourage the abstract.

They have produced numerous quality theatre works, including Frankenstein, Inc., MacBeth, and The Baltimore Waltz.  Their latest effort, entitled " Reefer Madness" is anything but a positive bit of pro-marijuana prose.

Directed by Stasi Schafer (Cabaret Director for the Pit and Balcony), Reefer Madness is actually a musical rendition of the 1936 movie of the same title. Back in the day, when black and white, government or interest group funded films were giving teens "the business" on everything from proper hygiene to how to behave oneself in public, the film was another bit of dreg designed to scare the BeJesus out of would be pot-smokers.

In the hands of Stasi Schaffer and the 303 Collective, though, it's a frank, comedic, and commanding look at how propaganda and media manipulation made our society tick.

The story centers on teenager Jimmy Harper, who falls into the great THC riddled abyss from his very first hit of the green. Influenced utterly by the drug and its users, Jimmy is run through every gnarly depravity of humankind possible.

With a new millennium wink and a smile, the 303 Collective's version of Reefer Madness paints a valid and disturbing picture of the manipulation of a segment of the population once awash in doubt and fear. Living through a second world war, a depression, and the great grab of the "Haves" from the "Have-Nots", the American Parents of the war/post war generation were determined to keep noses to the grindstone, toes on the line, and the fear of God deeply instilled in the young psyche.

Every bit of media of the time reflects some measure of control, however lovingly inspired, over youngsters who had the tendency to veer off the path. Even for its time, however, the original "Reefer Madness" was a bit over the top.

While its focus was on building a connection between smoking pot and the reign of chaos, the 303 Collective's interpretation recognizes, with far greater clarity, the calamity of control. Such is the benefit of hindsight, some 70 years later.

Blending huge talent, brilliant direction, and a good dose of self-deprecation, the 303 has taken a once zealous piece with an extreme message, and given it entirely new meaning and substance.


Review: Your version of Reefer Madness addresses propaganda and manipulation of youth through media. Do you believe the dynamic has changed from the time of the original movie to your translation on a live stage?

Stasi: NO! I wonder if you looked back this movie could have been the beginning of the current state we are in.  The original movie was made by a church group and was picked up by the exploitation circuit right away, so even in 1936 - which I like to think was a bit more innocent time - people were very aware of the absurdity of the piece and the seriousness of the intention was quickly dismissed as zealotry. But by having this movie out there and a group in all seriousness making this movie, it makes you wonder where the line is between reality and fantasy.  What are we seeing that we accept as fact, because that is the way it is intended, is really just an opinion.  It reminds me of the internet in a way.  Everything seems to be factual, but that is not true, so then what really is the truth?  There is a song at the end of the play called "The Truth" and if you listen to the lyrics it is anything but the truth!


Review: What is the most salient point in the piece?

Stasi: This piece skewers everyone and is very tongue-in-cheek.  I think a lot of points can be made through satire and nothing (literally) is sacred in this show.  I think humor really helps to demonstrate points because we laugh and then you are engagedŠ and then maybe it sticks with youŠ and eventually you start to think about what that joke really meant.

Review: What were the most difficult aspects of directing the play?

Stasi:  It's an incredible amount of work putting on a musical and nothing that will appear on stage would be possible without the amazing team that is working on the show.

Jason Graham (set designer) decided to use a lot of technology for the set, so setting that up and coordinating the images has been a challenge.  Then you have to have someone to design costumes (Deena Nicol), coordinate the band (Loren Krantz), choreograph the show (Rebecca Fournier), and design lights and sound (Marc Beaudin).  So it becomes this whole project of coordinating the coordinators! But it is a true collaboration. At the end of the day (it) should be fun, but it doesn't always seem like that during the process.

Review: Which part was surprisingly easier than you anticipated?

Stasi:  I have a very talented cast and directing them has been easy.  They are all on with creative interpretations and bringing their characters to life, all while singing and dancing beautifully.

Review: How has the play been received by the public so far?

Stasi: People seem very excited about it and most have never had the opportunity to see the show.  Almost everyone has seen at least part of the movie, so they have some expectation of knowledge of what it is about.  I have also noticed that a lot of people seem to be able to relate to the topic!

Review: How does this play "feel" compared to other works you've been involved in?

Stasi:  It is a really funny piece of theatre.  When I listen to some of the lyrics and the creative rhymes they used - they are hilarious and very poignant.  Last night I was watching a dress rehearsal and I was cracking up the whole time becauseŠ it is just so funny!  The show is also very, very musical - I think there is about as much music as dialog - so the music/dance has really been a focus on this show.

I am hoping that this show will bring a whole new audience to the Theatre.  I think this is the type of show that appeals to a non-musical theatre audience and I hope people who may not normally attend theatre will show up.  It is a very funny show with a kickin' band (Loren Kranz, Matt Besey, Joe Balbaugh, Todd Miller and Jeff Wiles) and it is great entertainment with a bite, so it should appeal to a wide variety of people.

I also want to thank Pit & Balcony for their help with a space to perform in - we are currently The 303 Collective in exile - so they have provided temporary shelter!

A warning to parents: the play features adult content and subject matter.