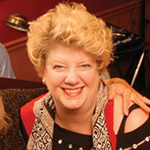 The jingle jangle of red hot Jazz will be bountiful as restaurateur and vocalist extraordinaire Molly McFadden fires up the Michigan Jazz Trail Big Band to stoke the yuletide log this holiday season with The Michigan Jazz Trail Christmas Show, happening on Sunday, December 4th at 3:00 PM within the inviting embrace of Saginaw's historic Temple Theatre.