Profile: A Whistling Holiday Bell Ringer Has a Deeper Purpose at Heart 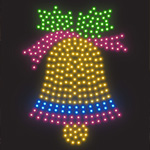 Ted Kolhagen is showing me how to ring a Salvation Army bell. He takes time from his red-kettle storefront duty on a crisp afternoon after Thanksgiving and hands me an extra.

The chime that soars so clear and rhythmic from Ted's bell is muffled and off cadence from mine. My metal ball gets tangled in the wire.

"Nah, you can't expect to do it like I do. I've got a lot of years into this," he explains, jerking his forearm up and down as he continues to ring holiday cheer.

Then he gives some bell-ringing advice from an old sports cliché. "It's all in the wrist," Ted tells me.

Kolhagen is 76 years old and he has been flipping that wrist for 49 years. Thousands in mid-Michigan recognize his bell ringing and his kettle-side standup routine of whistling, dancing and clowning.

With crinkly Santa eyes beneath his oversized Salvation Army cap, he built much of his recent reputation outside of the Target store on Tittabawassee Road. But Target, like most of the other chains, eventually asked the bell-ringers to look elsewhere. Kolhagen this holiday season is perched at the family owned Pat's Food Center in Freeland.

"It's fantastic because the entrance blocks the winds from the Northeast, and otherwise I would be frozen like an icicle," he says. "At my age, I can't stay in the bitter cold for too long."

His bell-ringing passion is so strong that he annually develops a blister on the outside of his right-hand forefinger that gradually morphs into a hard callous.

"You gotta ring it like you really mean it," Kolhagen says. "Some guys nowadays, they hardly even ring the bell. They just stand there and expect people to give a donation. I was like that the first couple of years. I was kind of shy. I would just stand back and lean against the wall. But I learned that when you go out there, you have to give 150 percent."

Children approach from the depths of the parking lot. With growing excitement, they hear Kolhagen's whistling whee-00-wheels mixed with his booming sing-song proclamations. "Santa's on his way-ay. I saw him on his sleigh-eigh."

Ted pretends to click their photos while they make donations. Then he lets the kids ring the bell. Sometimes he leaves a folded dollar bill half in the slot, half sticking out. When a little boy or girl approaches, he says the canister is getting full and asks the child to push the bill all the way inside. The youngster, with this simple gesture, has become not just a donor but also a helper.

Preschoolers and kindergartners and first-graders joyfully go ga-ga. Even some of the older children seem to forget that they don't really believe in Santa anymore.

Still, his conclusion when he receives kettle contributions always is serious and sincere.

"Thank you," he says. "Have a wonderful day. God bless. Merry Christmas."
One mother, in today's tough times, tells Ted she wonders about his 'Santa Claus is coming' promise.

TWO MARRIAGES AT ONCE

Kolhagen grew up in the rural Saginaw area during the Depression era, which helps explain his big heart for helping the less fortunate. He dropped out of school for youthful teenage work at Gase Baking Company in the city, and then faked his age in 1946 to enlist in the Navy.

He remained on active duty until 1954. He returned home and found work as a sheet metal mechanic - a 'tin knocker' - for local roofing companies.

He met Caroline Morton and she won his heart. They married and had seven children. Some people don't realize that The Salvation Army also is a regular church, the same as any other, with Sunday and weekday services. Caroline came from a Salvation Army family in Saginaw and ran the church's nursery, today known as child day care. And so Kolhagen ended up with two 'brides' - the woman he loved and the church she served.

He married his first red-kettle holiday storefronts in 1957, outside the downtown Kresge and Woolworth stores.

"It was different compare with shopping malls today," he says. "There were so many shoppers downtown, so close together, that we would walk down the sidewalks and collect."

He says he understands why corporate retail executives are fearful that the presence of Salvation Army bell-ringers could cause some customers to stay away, rather than deal with the guilt of failing to make a donation. He indeed encounters oncoming shoppers who stiffen their necks and avert his eyes as they march past his kettle. But at the same time, he believes the chain store chieftains would have fewer misgivings if they could see his friendly approach in action. He tries to have fun, but he never has put donation pressure on a customer.

"The local people at Target told me that they thought I actually increased their sales, because I made people fell more happy when they came into the store," he says.

For the most part, it's quarter-by-quarter and dollar-by-dollar, and also one-liner-by-one-liner.

A regular customer is prepared when Kolhagen teases him about his bald spot. "You would have one too," the fellow tells Ted, "if you were not wearing that danged cap all of the time!"

A mild-mannered older gentleman has his blue jeans hitched up near his chest, nerd style, as he pretends to reach fruitlessly for a donation. "My pockets are awfully high," he jokingly laments to Ted. "I'm having trouble getting my hands into them." But eventually he produces some coins for the kettle.

Ted tells a younger friend that a reporter is writing an article about him. The fellow responds with a mock testimonial: "This guy here, Ted Kolhagen, is probably the best panhandler that the Salvation Army has got."

Then along comes a well-kept senior citizen Golden Girl, a sort of Betty White look-alike with clean white hair, very prim and proper.

"Say ma'am," Kolhagen tells her, "I think you're looking better than ever".

She pauses for a moment and leans to Ted's car. "You know," she confides, "I lost my husband."

Ted can relate. His wife passed away in 1998, but he doesn't dwell on the point. "Are you dating?" he asks the lady. "Of course, I know I'm way older than you. Just how old are you, anyway, if I may ask?"

She answers that she's "ninety-something."

After some more brief chitchat, the Golden Girl minces her elderly steps and pushes a shopping cart for her groceries. Ted has made her day. A few quiet moments follow and he looks at a copy of a Salvation Army War Cry magazine. "It's like the cover asks, 'Who Do You Work For?' Ted Kolhagen explains, "I work for Jesus Christ."