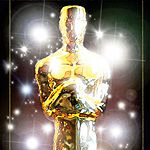 As this issue of Review goes to press one thing is certain - there will be an 80th Academy Awards ceremony broadcast around the world February 24th.

What form that broadcast will take, however, is anyone's guess. With the strike by the Writers Guild of America entering its fourth month, and no waiver granted by the Guild to allow writers to work on the oldest and most popular award show, it's uncertain if any A list celebrities will show up.

Anyone who caught more than five minutes of the snore-fest that was this year's Golden Globes can imagine how serious the stakes are in this game of financial chicken as movie producers and writers speed toward a cliff, neither of them willing to turn away first.
This year's Oscar broadcast may well be another casualty of the Writers Strike. The Daily Show's Jon Stewart is slated to host for the third time, although it's uncertain whether he would still participate absent a waiver that would allow writers to pen his jokes and celebrities to attend and participate

A press release from the Academy recently pointed out that while it is true that no waiver has been granted by the WGA, the Academy has not requested such a waiver.

One might presume this is because they have had some indication such a request would not be viewed favorable, not because they don't want to have writers.

Last week The Academy of Motion Picture Arts and Sciences announced it was preparing two versions of the award ceremony.
It will prepare the usual ceremony involving the participation of Hollywood A-list celebrities and writers. The back up plan will be a show absent Tinseltown royalty, short on awards and long on tributes and clips of great moments from the ceremony's 80-year history.

Even if no settlement is reached, and this year's show is nothing more than a black tie press conference emceed by sycophants from Entertainment Tonight and The Insider, the winners will still be announced, even if stars like Michael Clayton's George Clooney won't cross the picket line to pick up their statuettes.

So enough of the world of commerce and labor contracts intruding on The Fantasy Factory. Here are the major award categories, the nominees and the odds at presstime:

Best Motion Picture of the Year

* Atonement, based on the novel by British author Ian McEwan, is a 2-1 favorite to take Best Picture. The film, starring Kiera Knightly, is about the shattering fallout of a young girls accusations against her sister's suitor, set in Great Britain during World War Two.

* There Will Be Blood, starring the wildly brilliant Daniel Day Lewis as an early old tycoon, is given 3-1 odds in this category.

* No Country For Old Men is another darkly strange offering from those Midwestern Pioneers of the Perverse and Offbeat, Joel and Ethan Cohen. Their 1996 film Fargo, was nominated for multiple awards and won the brothers an Oscar for Best Original Screenplay. This film is adapted from a novel by Cormac McCarthy. Odds: 9-4.

* Juno: Screenwriter Diablo Cody's much loved script about a witty high school girl who gets pregnant and decided to have the baby, is given 5-2 odds to win Best Picture.

* Michael Clayton, a fitting vehicle for liberal activist, humanitarian, and all around Good Guy George Clooney to portray a lawyer fighting corruption in his high-powered law firm. This venture into John Grisham territory is given 11-4 odds, making it the evening's longshot.

Since Atonement director Joe Wright was not directed (which usually leads to jokes about "the movie that directed itself") the Cohen Brothers are 2-1 favorites to win. It wouldn't be surprising for the Academy to honor them since they have been turning out stylish art house films for more than 20 years, never being rewarded outside of the writing categories.

Director Paul Thomas Anderson, who exploded onto the scene with Boogie Nights and Magnolia is a 3-1 favorite for There Will Be Blood.

Julian Schnabel, director of The Diving Bell and the Butterfly, and Michael Clayton director Tony Gilroy are longshots at 9-4 and 11-4.

George Clooney is given 2-1 odds to take this award for Michael Clayton. The Academy often awards noble uplifting crusader roles like Julia Roberts as Erin Brokovich or Gregory Peck as Attacus Fitch in To Kill A Mockingbird. But look for The Actor's Actor Daniel Day Lewis to win for his psychotically wild oil tycoon in There Will Be Blood. He's a 3-2 favorite.

Johnny Depp is nominated for the bloody brilliant Sweeny Todd, and Viggo Mortenson and Tommy Lee Jones round out the nominees, cited for their amazing work in movies very few people have seen (Eastern Promises, In the Valley of Elah).

Veteran actress Julie Christie is a 2-1 favorite for Away From Her, a heartbreaking portrait of a marriage decaying due to dementia.
Cate Blanchett is given 9-4 odds for the sequel Elizabeth: The Golden Age. Also nominated are French actress Marion Cotilliard as Edith Piaf in La Vie En Rose, Laura Linney for Passage and Ellen Page for Juno.

Favorites in other categories

Javier Bardem, who played the menacing killer in No Country For Old Men will likely add an Oscar for Supporting Actor to his Golden Globe, although Casey Affleck, little brother of Ben, is also in the running for his role in The Assassination of Jessie James.
If Cate Blanchett doesn't take Best Actress, she will likely get the nod for Supporting Actress for her surreal cross dressing take as an androgynous Sixties Bob Dylan in I'm Not There.

Ratatouille, which was probably seen by more people than most of the other nominees combines, will certainly win Best Animated Feature and will probably win several technical awards. That's often where popular films like Star Wars get recognized.

Comedies are notoriously overlooked except in the writing categories, so Diablo Cody will most likely be honored with Best Original Screenplay for Juno, and the Cohen Brothers should win for Best Adapted Screenplay.