NOW SHOWING • The Stories of the Silver Screens of Saginaw County

Projection System from the Court Theater • circa 1960s

Interior of The Jeffers Theater

Given the mandated isolation of the digital age, it is difficult to fathom a time when the artistry of motion pictures were displayed not on hand-held devices or 13-inch screens sitting on our laptops, but rather within the cinematic splendor of ornately designed architectural masterpieces, replete with massive screens and plush velvet seats where hundreds and thousands of people within our community would gather to immerse themselves in the magical imagery of the cinema.

But thanks to a fascinating exhibition now showing at the Saginaw Castle Historical Museum titled Stories of the Silver Screens, we are given a rare glimpse not only into the intoxicating beauty of the movie palaces that populated Saginaw County; but into a pivotal period of growth for both a new industry and the notion of entertainment as a fresh point of congregation for the people that populated our community.

The perfection of the motion picture was the result of the work of several great inventors. One of the first great breakthroughs was made in France by brothers Auguste & Louis Lumiere, who were pioneers in the development of a process of projecting moving images and demonstrated their system - known as the cinematographe - in Feb. 1895.  In Jan. 1897 - only two years after the system was first shown to the public in France - presentations began showcasing this system in Saginaw at the Masonic Temple and the Teutonia Theater.

Indeed, it is difficult to believe that since that time over 60 movie theaters have thrived in Saginaw County. Moreover, by the time the first motion pictures were shown in Saginaw in 1897, Saginaw was Michigan’s third largest city.   Since before the civil war, opera houses, lectures halls and theaters provided venues for live entertainment. Saginaw stages served city residents and outlying communities.

On Dec. 16th, 1884, the Academy of Music was opened on S. Washington Ave. and Janes St (then named William St) and was considered one of the finest theaters in the entire state of Michigan.

According to Castle Museum historian Thomas Trombley, the first movie shown in Saginaw was at Saginaw’s Riverside Park back in 1897.  “They would have demonstrations there and the first film shown was called the ‘Spanish Bull Fight’. It lasted one minute,” he smiles. “By the 1920s, ‘30s, and ‘40s, which is when the movie palaces really expanded, this is when motion pictures first started moving into the vaudeville theaters; and by 1906 you saw many of these theaters advertising regular features.”

In April of 1914 investors announced a project to construct a theater on the northeast corner of Federal and Franklin Streets. Designed by Saginaw architects, Cowls & Mutscheller, almost all the funds to construct the building were raised locally. Designed to accommodate 1500 theatergoers, it was located as an anchor to spur development in the adjoining blocks.

Known as The Franklin Theater, it opened on Jan 25, 1915, with a program that included vaudeville acts and one motion picture. The first months were difficult for the operators. Apart from problems with acoustics and complaints about the heating system, local operators were unable to reliably secure major acts. Consequently, within six months after opening, The Franklin was leased to the Butterfield Chain from Jackson, MI. Butterfield was a major operator of Michigan Theaters and would control the operation of Saginaw’s major theaters for over half a century. Before it was torn down in 1972, as a young child I can still remember the excitement of catching The Beatles’ A Hard Day’s Night at The Franklin; as well as taking my high school date to see Stanley Kubrick’s A Clockwork Orange just before it closed.

While The Temple Theatre has always been the diamond jewel of our region, between 1920 and 1950 dozens and dozens of movie theaters popped up like mushrooms with magical names like The Wonderland (N. Hamilton St),  The Mecca (S Washington), The Paloma (S. Michigan) The Regent, (Genesee), The Roxy (N Michigan) and The Daniel (later known as Michigan’s premiere teen rock ‘n roll venue on State Street).

“One of the earliest locally owned theaters was The Luminaire,” continues Trombley, “and Butterfield started purchasing a network of local theaters, such as The Jeffers, which they closed then they took over The Temple Theater.  Butterfield was definitely a major player and the Kingmaker for all the owners. They controlled the market, but locally owned theaters like The Marr and The Ken and The Royal couldn’t keep up. The Regent Theater was formerly known as The Bijou, and believe it or not the architect who designed it was the same architect who designed the famous Trans American  building in San Francisco.”

According to Saginaw Cinema historian Barry Rindhage, “Most newspaper accounts site Harry’s Theater, which was on N. Washington near to where the Brewer Arcade was as being one of the first to ever show movies in a theater designed to showcase films on a regular basis. The Riverside showed them as a novelty and it was a very small theatre; and many of the others started as opera houses.”

The upholstery on seats from the Temple only hints at the opulence and richness of the interior design with many of these theaters, which thankfully has been preserved and restored by the late Dr. Samuel Shaheen.  While the architects for the building at The Temple were Osgood and Osgood of Grand  Rapids, the interior décor - decorative painting, drapers, carpeting and other furnishings - were the work of Tuttle & Clark of Detroit. They also decorated the interior of the Michigan Theater in Ann Arbor.

While movie theaters are still an important part of our community, today entertainment Is everywhere. But there was once a time when going to a theater required travel and the building was an integral part of the experience.  As were the people who convened to share the experience.

I can’t recommend this exhibition highly enough.  Be sure to check it out.  The Castle Museum of Saginaw County History is located at 500 Federal Ave. in Downtown Saginaw. Find out more by going to castlemuseum.org. 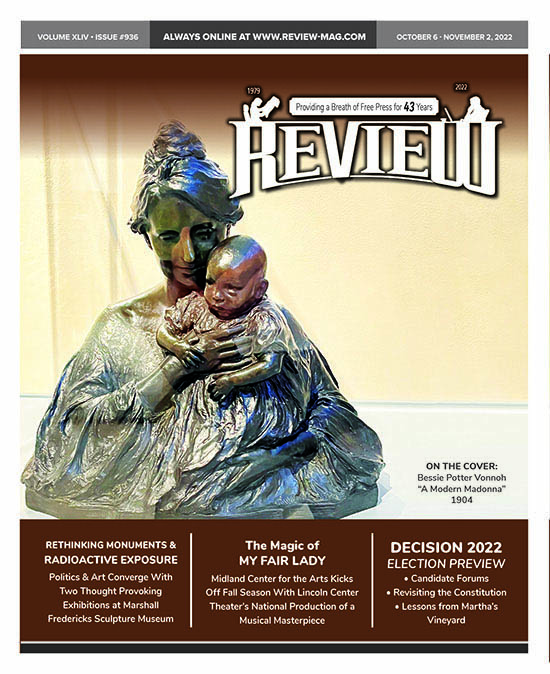