Neighborhood Associations Having a Positive Impact 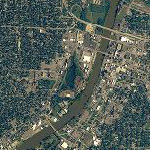 Saginaw's Oma Ozark, Wanda Gilman and Bonnie Leiner knew they were on the right track this spring when they heard the story of a neighbor who lives a block from a homicide site near Congress and North Bond.

"She became so afraid that she was literally living in her basement. When you’re afraid to live in your own house, that's pretty bad," Ozark says.

The trio are longtime Saginaw friends and neighbors who live a few blocks west of Covenant HealthCare's main campus, near Woodbridge and Holland.

Early this spring, even before the homicide, signs of decline increasingly alarmed them:

* A neighbor was mugged as she got out of her car in the early evening.

* More homes had become abandoned, more transformed to rental, more up for sale.

* Young people were hanging out along street corners and in party store parking lots. The three women didn't agonize. They organized, recruiting members door-to-door and by word of mouth.

Their result is formation of the Covenant Neighborhood Association, which quickly has grown to a typical attendance of more than 50 residents.

"The group grew so fast, it was sort of like a shock," says Ozark, the association's president. "The three of us just intended to do a small Neighborhood Watch in our own area, but then the word spread and we ended up with this larger group.

"People were waiting for something like this. Some neighbors are moving out, but many of us want to stay and some of us have no choice."

Many groups are active

The Covenant-area group on Saginaw's near West Side is just one example of resurgence in neighborhood-based organizing that mostly died out after the 1960s and 1970s.

This year's other major new Saginaw initiative is Parishioners on Patrol, a church-based group of men who cruise the southeast streets on weekend evenings and bravely encounter young people who are hanging out.

They report that some flee, but that others join them in prayer and express inner desires for change. City Hall recently assisted the group with a revived police mini-station at 2302 Sheridan, and members are cleaning vacant lots.

Some of the associations are older standbys.

Christina Jones with the Houghton-Jones Neighborhood Task-Force (named in part for Jones School, not for Christina) recently helped her group conduct its 17th annual summer festival. Earlier in the summer, members walked through the heart of the East Side and stopped at street corners to pray for peace. Bob Andreotti has persevered since the early 1990s with the Southwest Village Neighborhood Association, which operates a food bank and a host of other activities. Former Councilman Tom Webb keeps the Saginaw High School Neighborhood Association in action. Mary Washington, a local aide to U.S. Senator Carl Levin, does the same with the Northeast Saginaw Neighborhood Association.

The Heritage Square Neighborhood Association has remained the most consistently active group during the past decade, highlighted with renovation of Otto Roeser Park a few blocks west of the Courthouse.

Then there's the Cathedral District Neighborhood Association in the area surrounding St. Mary's of Michigan Hospital, which has the added boost of serving as City Hall's first target area for federal block grant funds. More than 300 children attended a recent picnic and carnival in the hospital's rear parking lot.

Neighborhood activists give an array of reasons for the surge in organizing. Many say the city's gradual decline has become so severe that a sense of urgency has grown. They also give credit to the Saginaw Police Department for helping the various groups begin to communicate with one another. For example, Parishioners on Patrol has crossed the river to assist the Covenant-area group.

"Instead of sitting in our houses and shaking in our boots and not knowing what to do, we can make a concerted effort to provide tools for people and serve as a resource. I'm a long-timer here and I don't feel like giving up," Wanda Gilman says.

A main goal for September and October is to organize Detroit-style preventive citizen action to combat arson during the season of Devil's Night and Halloween. Saginaw made national newscasts and headlines last fall after a spike of more than 50 fire calls during a three-week span.

Many issues on agenda

At the same time, these are more than anti-crime associations and they go far beyond the core city. One of the groups meets at the St. Stephen Catholic rectory.

Houghton-Jones uses its headquarters for a summer youth program, and for groups to conduct meetings on anything from substance abuse to proper parenting.

In the Covenant-area group, members are concerned about troublemakers on the streets but they express equal displeasure toward slum landlords. They aim to compile a list of landlords with multiple code violations and press for action, and to make sure that owners of rental properties are licensed with City Hall. They also will seek zoning changes so that owners no longer can split single-family homes into multiple apartments.

Meanwhile, Association Vice President Ed Blohm says residents can take some matters into their own hands. He is aiming to help organize a fall community cleanup, followed by another next spring. Some members already have started to mow nearby vacant lots.

"It can be like a real in-the-face statement of saying, let's take ownership of the neighborhood," Blohm explains.

Toni Garcia, a longtime neighborhood organizer, says potential issues are countless. Residents may desire something as simple as having traffic signs or signals at an intersection with high accident counts, or for animal control officers to do something about stray dogs.

"I didn't have any special training to be an organizer. Mostly I just used the people skills that I learned working as a waitress, and I tried to be creative,"  Garcia says.

"One time, it seemed like the single mothers were going through a lot of stress, and when they talked it seemed like it just created more stress. I suggested that we form a softball team, of all things. This seemed to work really well. We could go out and have fun and release our frustrations.

"Sometimes it was hard to recruit members. One thing I learned was to tell people that if they volunteered with the group, it would look good on
their job resumes."

The Covenant-area group, at this point, is not affiliated with Covenant HealthCare. Members say they picked the name because they hope for a future partnership with the medical complex.

Instead, Covenant neighbors have received early guidance from Healthy Community Partners, an outreach effort originally funded by St. Mary's of Michigan before switching to other sources of grant support.

St. Mary's has pumped more than $2 million of its own money into the Cathedral District and has landed a $318,000 grant from the regional Daughters of Charity. A follow-up  $900,000 grant proposal has been submitted.

Projects backed by St. Mary's have included home demolitions, a traveling medical unit, the
Cathedral District Youth Center and the GreenHouse Gathering Place. Another outreach effort offered mini-grants for homeowners to beautify their properties, or to obtain adjacent vacant lots.

"Citizens (on the West Side) hope to get support from Covenant HealthCare to fund successful efforts like those in the Cathedral District that have been funded by St. Mary 's of Michigan. There are many ideas and initiatives that can help turn the tide of disinvestment, bringing pride of ownership back to another part of our central city," says Jeff Bookmyer, a Healthy Partners organizer. Covenant spokeswoman Leslie Perry responded after consulting with CEO Spence Maidlaw. She says Covenant is making increased neighborhood investments, although not necessarily at the level of St. Mary's.

"At this time, we don't think the level of blight is so extensive that it demands such a high-level investment," Perry says.

Still, Covenant is spending hundreds of thousands. Highlights include: A Walk to Work project that provides incentives for employees to buy homes in the neighborhood. So far, five employees have applied for down payment assistance of up to $7,500 apiece, along with up to another $7,500 to make improvements.

* An effort to purchase nearby homes for sale so that they won't become abandoned, costing up to $100,000 per year.

* A 10-year pledge of $10,000 per year to support Bliss Park improvements. This is a turnaround because before the Covenant merger in 1998, St. Luke's drew public criticism in 1993 with a short-lived proposal to expand into the Bliss area.

In addition, Covenant is considering a proposal from Saginaw Police Chief Gerald Cliff to help pay the $80,000 annual cost of a neighborhood-based community police officer. City Hall uses federal block grants for three officers in other zones, but Cliff says the program would need private support to expand.

"The neighbors should be commended for working together to improve the community," Perry says.