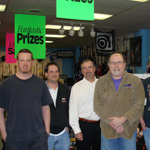 Rick Allen is an individual that developed a love for music at an early age and also managed to weave his affection & support for the people that create that music into one of the area's most successful business entities.

An accomplished musician with a fondness for Folk & Bluegrass, back in 1984 Rick opened his first full-service music store in Midland known as Mid-Michigan Music.  With a focus on providing a varied selection of high-quality string instruments, band equipment, amplification, along with professional service to back up his sales, the venture quickly expanded into a second Bay City store, moving even deeper into the Saginaw market with the acquisition of the venerable Bay Music a few years ago.

Always one to stay on top of rather than follow a trend, the evolving climate of to today's world, focusing much more on on-line and Internet driven markets, combined with his committed belief not to compromise on service or selection for his clientele, has caused Rick to re-think the evolution of Mid-Michigan into the 21st Century.

Consequently, Rick will be closing his Saginaw store and creating a massive new Showcase Venue at the Bay City location, hopefully to be renovated and completed by the last week in May. When asked about the evolving trends he has noticed in music retailing over the past 33 years, Rick laughs, noting "It would take several pages to explain the various stages of growth over the years, but as with any successful corporation, you get to a point where you need to expand in order to grow. All businesses will hit a plateau and level off; but generally at that point, they either start going up or start going down."

"We've always wanted to expand in Bay City, so when we lost a tenant there rather than lease the Saginaw space, the logistic fell into place to move everything over and expand the Bay City store."

A strong component reflective of recent trends centers on public address installation, especially with churches & schools. "Steve Meyers has dedicated himself to that arena," notes Rick, "and the last six months have been nuts. We've always done fairly well with it, but now it's at a whole new level."

"Plus our online business is growing in leaps & bounds," adds Rick. "We've been pushing it for two full years, and compared to when we first got started, we've noticed a four to five times increase in activity. We need to be able to focus on these areas where serious growth is happening. It's a healthy move for us."

"We're not walking away from our customers in Saginaw, and I really want to emphasize that.  We think by giving them a bigger selection under one roof, its more beneficial to all of our customers.  And once they get here, they will see twice as much inventory than currently at any of our single stores in the tri-cities.  It will become a destination point." Setting a goal to be cleaned out by April 30th, and with renovations already going on in the new adjunct to the Bay City building, Rick is hopeful to have everything finished, up & running in Bay City by the end of May.

"I'm very blessed to have some talented people," emphasizes Rick. "Steve started the online division on a shoestring with about 4 to 12 items, and now we have 7,000 items online. It's really starting to take hold.  We have two guys working e-Bay, and are also doing well with that. There's new surge of manufacturers eager to get on e-Bay stores, so long as you abide by their policies. In fact, we became probably the first Fender e-Bay store dealer in the country."

When asked how he distinguishes Mid Michigan Music, stands by the notion of independence. "We handle service on what we sell and not many entities have a division of employees doing repairs on audio equipment, guitars, keyboards and the like.  My staff knows the business well and have stayed here a long time, so a sense of continuity is built-up.  Employee retention allows the staff to grow and become more knowledgeable in helping the customer out. That, I believe, is one of our strong suits." When asked what new surprises equipment-wise are coming down the pipeline, Rick points to the pro-line of audio installation and new Crown amps and DBX he has coming into the store. "We've subcontracted with Tim Drummond from Hyperman Productions," notes Rick, "and formed a strategic alliance with him, which opens up consulting and turnaround time dramatically."

Indeed, one area of the Bay City store will be dedicated to installation, showcasing different cabinets so people from churches & schools can check out the product and receive demonstrations.

"Our industry really has changed in the last few years," concludes Rick. "But challenges have always been opportunities to me. That's why I'm excited about the changes.  I love the new frontiers. Stores that don't change with the times won't make it."

With sixteen people on the payroll and at least another 20 subcontractors, Mid Michigan Music is poised and eager to continue offering benefits to the musical community that it has for 33 years.

"The most important thing I wish to convey is that we're not going away in any way, shape, or form. We're still here to serve as many people as we can. Mainly this is a moving sale more than anything. And my message to the customers of Saginaw is that we intend to keep servicing them.  Even before we had other locations, there were about 40 Saginaw customers in our data base, so my hope is to keep them coming to our new & improved store as with the old store they used to go to in the first place."