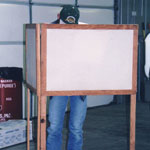 Michigan voters on November 4th will decide on ballot proposals for Medical Marijuana use and Stem Cell Research, but they will not get a chance to consider a part-time legislature or advisory referendums on state tax increases.

This is because Saginaw attorney Greg Schmid and other organizers abandoned efforts to collect the required 380,000 signatures.

Meanwhile, a Michigan Court of Appeals ruling apparently will block a November vote on a massive overhaul of the State Constitution, rigged behind the scenes to aid Democrats.

At this point, nothing on the ballot is generating high-profile emotion that would match the 2004 ban on gay marriage or the 2006 rollback of affirmative action.

Political conservatives had their way on both of those issues.

In Review's January 10 edition, Greg Schmid and his father, Al Schmid, announced a pair of petition drives that they said would reform state government.

The first initiative, for the part-time legislature, would have cut salaries in half to about $40,000. Pensions and other benefits also would have been slashed. Lawmakers would have served mostly in late winter and spring, a system similar to at least 39 other states.

A key provision of the second plan was to take a statewide vote, every two years, on each and every tax increase that was passed. The referendums would not have been binding, but the intent was simply to create public pressure on legislators.

Greg Schmid said momentum never was built to even come close to 380,000 names, noting how organizers were not willing to pay signature agents who stand in front of post offices and supermarkets, as we all have seen. It was evident by March that the pair of petition drives was stalling.

Both a part-time legislature and tax referendums would have faced bipartisan opposition. State Sen. Roger Kahn, and Reps. Andy Coulouris and Ken Horn all told The Review that they work full-time and then some. The trio also asserted that if voters are unhappy with taxes, they could throw incumbents out of office regardless of a statewide referendum.

Thousands who suffer from afflictions ranging from AIDS to multiple sclerosis, from Crohn's disease to glaucoma, have reported that they receive relief from ingesting THC through pot.

Legislation to protect these folks from criminal action has become a national trend. Ballot initiatives are a typical option, in order to protect elected officials from right-wing charges that they are soft on drugs.

The Michigan Coalition of Compassionate Care has employed Rochelle Lampkin of Detroit as a spokeswoman. She is a 50-something grandmother who contracted MS as a young adult. She says she neither drinks nor smokes, and she once actually joined neighborhood pickets to protest at a "drug house" where reefer was sold.

In other words, in no way is Ms. Lampkin a druggie.

Pain behind her eyes a few years ago was becoming unbearable. A fellow MS sufferer encouraged her to try medical marijuana. She took a few tokes, even though it was against her principles, and voila - she felt relief that she says was long-lasting. She now is a regular user but insists she does not ingest enough to get high.

On the law enforcement front, police and prosecutor groups are opposed simply because marijuana use is illegal and in their estimation, the law is the law. On the medical front, doctors have mixed opinions on whether marijuana is the best treatment.

Medics who oppose medical marijuana insist that a prescription drug, Marinol, contains active THC. Lampkin and dozens of other pot-for-relief advocates have answered that not only does Marinol fail to offer comfort, but that it costs an arm and a leg - underscoring allegations that what medical opposition does exist to these measures stems from greed and protectionist action by the pharmaceutical industry.

Foes also have asserted that smoking marijuana can cause lung cancer, the same as cigarettes. Lampkin's response is that she now takes her doses of THC by drinking tea.

Critics insist that Proposal 1 advocates are using medical marijuana as a sinister launching point to make the substance legal across the board. Supporters respond that their proposed law is written with very narrow definitions regarding who would qualify, possibly 50,000 Michigan citizens. A doctor's prescription would also be required.

On the flip side, the U.S. Supreme Court has voted 6-3 (as usual) that even in the 12 states that have passed medical marijuana provisions; users still are subject to federal prosecution.

Advocates try to shrug off the 2005 ruling when they note that federal agents almost never pursue an individual's ingestion of the substance.

The Stem Cell Initiative is also known as Cure Michigan. Several past and present state legislators are supporters. The ballot proposal has come forward because a majority of existing legislators have balked at taking action.

National debate is best known for a focus on Nancy Reagan. She had joined her husband, President Ronald Reagan, in a number of conservative and even ultraconservative causes. But when Nancy learned that her "Ronnie" was afflicted with Alzheimer's disease - and that stem cell research possibly could help - she joined progressives to fight the fight.

Michigan's Proposal 2 for stem cell research, similar to Proposal 1 for medical marijuana, is based on ballot proposals in other states.

Advocates of Proposal 2 say the new law would allow research on donated embryos created during fertility treatments that otherwise would be discarded. Such research now would constitute a state felony.

Foes are gathered through Michigan Citizens Against Unrestricted Science and Experimentation. Their title pretty much sums up the reason for their opposition. Their partners include Right to Life of Michigan, and the Michigan Catholic Conference. These groups assert that stem cells taken from adults or umbilical cords are sufficient for research.

Cloning also enters the picture. Foes say that Proposal 2 would open the door to human cloning. Advocates answer that cloning is a separate issue, and that their proposal would not make a difference in Michigan exists law.

It appears as of press time that voters will be denied to vote upon what would have been Proposal 3, the Legislative and Judicial Restructuring Initiative.

The independent and non-partisan ballotpedia.org reports that "a sweeping revision that appeared out of nowhere" contained 19,500 words with 31 revisions.

If you are a government "wonk" person who gets into political intrigue, you may find yourself entertained by this matter. Otherwise you need not bother, at least for now.

In a thumbnail sketch, the United Auto Workers website advertised "Government Reform Proposal: Changing the rules of politics in Michigan to help Democrats."

This came to the attention of the conservative Mackinaw Center for Public Policy, which spread the word to the media.

The whole deal is as complicated as calculus. But just for a sampling, "reform" would have eliminated two Supreme Court justices and seven appellate judges in the name of downsizing.

It just so happens that among them all, we have eight Republicans and one Democrat. Outraged GOP conservatives filed suit in protest.

The Court of Appeals on August 20 banned the "Government Reform Proposal" from the ballot, describing it as "overly broad." The thing is, some of these appellate judges are among those who would have lost their jobs. Therefore, advocates of the ballot scheme are hollering that those appellate  judges should have withdrawn based on conflict of interest.

Governor Jennifer Granholm and Lt. Gov. Cherry are among Democrats who are washing their hands and saying they had nothing to do with the ballot proposal, but GOP protesters say both gave money.

This plan apparently will not join medical marijuana and stem cell research on the November ballot. Therefore, The Review will invest no more costly ink in a quest to further explain.


But if you are interested in political intrigue with as many twists as Watergate, feel free to get onto your Google and explore further.