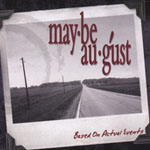 Ask ANY entertainment writer: Penning a review of a CD produced by someone you know is a little like playing in traffic. Like cruising through Baghdad in a thong bikini, there are negatives to consider.

Not that I'd shy away from it.  After all, there is always that infinitesimal shot at getting to the other side of the proverbial street unscathed. Anyone who knows me well enough sees me as the kind of person who can be counted on to run with scissors; to drink milk a day after it's expiredŠto live on the EDGE.

It was no surprise then, when Review This Radio Dot Com's Artist of the Year Maybe August presented me with their latest release Based On Actual Events, for review. They did so knowing that I would listen objectively, perhaps even critically, since I am truly a fan and friend of the band. They expect me to be brutal when need be. Let's be honest: since I would get no less from them. To quote MA bassist Keith Carolan: "Don't freakin' pamper us. We wanna know what you think".

Fortunately, MA has spared me the agony of having to say anything untoward. The work in Based on Actual Events is unfailingly superior to anything I have heard in quite some time. And yes, I can say so objectively.

Those who have enjoyed the band thus far may be a bit surprised at the direction that MA has taken. Some may have to readjust their thinking about what makes the connection between the fan and the artist.  The sound on this recording is far more introspective, and perhaps a little more "preachy" than past works, but Maybe August pulls it off brilliantly. In the hands of a lesser band, the material would come off as smarmy and over the top. But with experienced finesse, each cut of the new album tells a story that is just down to earth enough to hit home.

It would appear that somehow, somewhere down the line, Maybe August founder Mike Robertson's vision has begun to materialize.

Again, playing in traffic, I will predict that some reviewers will tag the new album as a departure for the band. I would submit that with the release of this album, Maybe August have hit a turning point, and finally become a band.

Setting itself apart from the work of "The Former Members of Blues Controversy" and "The Michael Scott Band", Based On Actual Events reflects the cohesiveness and shared vision of some heavy hitting talent that has found its compass; finally and completely effecting its own entity.

The visuals invoke the simple and earnest musings of a group of guys who have seen a lot, said less than you may think, and have expressed themselves almost exclusively through their music. The cover greets the listener with a plain black and white photo of a lonely road that could be Anytown, USA. A live shot of the band on the back, sans your run of the mill "pretty boy" poses, seems to say: "Here we are, here's what we do" with quintessential Maybe August straightforwardness.

While I loved the bass line in the song, I found the first cut, "Naked", to be a little too far into a Ferris Bueller soundtrack groove than I would expect from the band. I wasn't sure if I was listening to a spoof on Paul Simon or the audio on a Saturday Night live skit about party bands ("I need more cowbell!!"). The rest of the album, however, had me replaying the cuts with an active ear.

Working with producers Geoff Michael and Gregg Leonard, the final mix is far beyond anything else MA has trekked to date.  The harmonies are solid and interesting, intermingled with the ever impressive guitar lines that are signature of guitarist and vocalist Michael Robertson. While harpist Rosco Selley's formidable talents are not quite as prevalent in this album, his chops are still astounding, just as his songwriting and vocals prove to be some great work. Bassist Keith Carolan all but shouts his enjoyment of the project through his instrument. The interplay between each member is clearly a high point. Simply put, this band was MADE to play together, and Based on Actual Events reflects that.

Perhaps the most impressive aspect of the "new" sound is the realization of vocalist Scott Robertson as a genuine talent. Always a great singer, he has moved on from the "push and pull" approach to a melody; doing less in the way of tackling a vocal line and more in the way of embracing it.

Nothing reflects this better than the gospel song "Light", penned by Rosco Selley, who makes a more than noteworthy contribution on harmonica. In this cut, Scott finally begins to shrug his Queensryche influenced vocal stylings, and gives us a glimmer of what he's truly made of. I've been familiar with Scott's work for a number of years, and I've viewed the progression as gradual. Not anymore.

Like a toddler taking a first few tentative steps into raising some real hell, Scott Robertson has hit a milestone. He's begun to take his craft to the next level; invoking a well deserved "attaboy" from me more than once at my first listen of the album. In this singular work, he has proven that the mark of a good vocalist is not always how hard you can cast it out there, but how skillfully you reel it back in. I can't help but think to myself that he is moving into a new realm that will smack MA fans squarely between the eyes, and get the rest to stand up and take notice. The final piece of the puzzle has found its mark, and, as a result, the entire group has found its voice.

More bluesy and folk influenced than the band's previous endeavors, Based on Actual Events seems to think more deeply and feel more regretfully than Maybe August has led us to believe they could. Somewhere in this mix, beyond the simple musings of a down to earth group of misfits from Michigan is something tangibly important. There is a message here, and the band sends it with every instrument at its disposal.

Though it's not their first effort, MA has proven their ability to put lyrical and musical phrasing into the same emotional undercurrent; something some bands, however talented, never quite realize. Direct, unapologetic, and affecting; the impact of the new material is staggering.

After a few spins of the new album, I felt the need to sit quietly and just think about things. When I review music, I often take the time to evaluate how it connected to me, for better or worse. In this rare instance, I felt the connection before I realized how it materialized. In truth, I'm still not quite sure where they hooked me. Somehow, despite my familiarity with Maybe August, they have managed to bring back a little sense of mystery to my relationship with their music.

Unlike the artists who need to reinvent themselves to keep a fan base, they have simply revealed a little more of who they are.

Refreshingly, MA did not approach this album with the idea that it had to be marketable. Rather, they have created something that bridges who they were, with who they are longing to become. It's something that each of us reflects upon from time to time. Perhaps that is the connection that has eluded me.

Because it has more clearly defined who they are, Based on Actual Events is already a successful album for Maybe August, though in my opinion, not their best.

That, to be certain, is yet to come.

You can hear Maybe August at their website at www.maybeaugust.com