The Spirit rookie will represent his home country this week in Plymouth, Mi 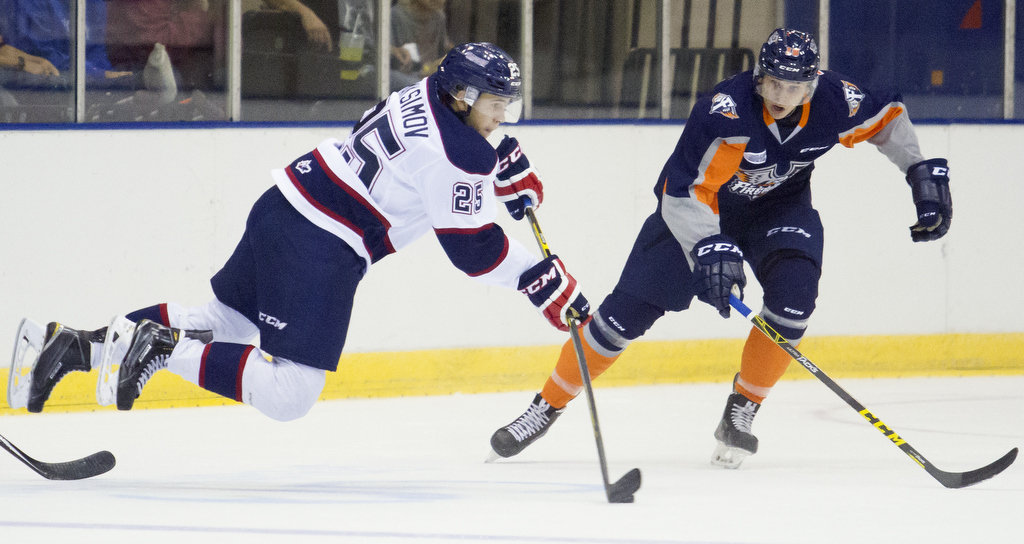 Saginaw Spirit GM Dave Drinkill announced today that rookie Kirill Maksimov will represent his home country Russia at the 2016 Five Nations Tournament at USA Hockey Arena in Plymouth, Mi this week.
The event -sanctioned by USA Hockey- opens February, 9 and runs through February, 13 2016 will feature the best hockey players under the age of 17 from the United States, Russia, Sweden, Czech Republic, and Finland.
“We are pleased (as an organization) that Kirill has been recognized by his home country of Russia to play in an international competition,” Drinkill said in an email sent from the team Monday afternoon.
“It will be a great experience for him to go up against some of the top players in his age group from around the world. Events like the Five Nations Tournament leave lasting memories and help develop players like Kirill on and off the ice. We are excited for him and wish him the best of luck as he competes for Russia in Plymouth.”
The Spirit drafted Maksimov in the second round (38 overall) in the 2015 OHL priority selection draft this past April. He will be eligible for the 2017 NHL entry draft.
Maksimov, a 16 year old native of Moskva, Russia, played youth hockey for CSKA Moskva before moving to Concord, ON in 2013 to play for the Toronto Jr. Canadiens' minor midget program in the GTMMHL, making him eligible for the OHL priority selection draft.
The 6-foot-1 inch, 185 pound winger currently has 4-goals and 10-assists for 14-points through 42 OHL games in his Saginaw Spirit rookie campaign.
Maksimov and team Russia open the tournament against Finland at 3:30 pm Tuesday afternoon. Team Russia will then play Sweden Wednesday afternoon at 3:30 pm. and Czech Republic Thursday afternoon at 3:30 pm. They will wrap up the tournament with a 7:00 pm game on Saturday evening against Team USA.
The Spirit will try to stop their recent 5-game losing skid when they head to North Bay, ON to begin a 3 game road trip Thursday night.
The Spirit will then head to Sudbury, ON Friday and Sarnia, ON Monday for a rare 2:05 pm afternoon game, before returning to the Dow Event Center Wednesday February, 17 where they will complete a home-and-home series with the Sting.
Miscellaneous   Rock   Rap/Hip Hop   Country   Jazz   Blues