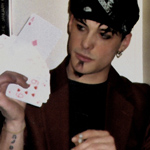 Credulity is the man's weakness but the child's strength.'       -Thomas Lamb


Magic and illusion are two diametrically opposed forces vying for the same page in our  consciousness - even the most cynical naysayer in the deepest recess of habit & predictability yearns for a healthy dose of magic in his life; while those imbued with the gift of magic know that in reality, it's true art is engendered by creating a 'suspension of disbelief' within the one possessed by it.

For Jason Jewell magic & illusion are the marrow of what makes life worth living, and this intense, quick-witted, affable, and completely engaging 25-year old wunderkind from Bay City is rapidly making a name for himself within the smoke, mirrors, and competitiveness of the professional magic circuit.

Following in the footsteps of such local luminaries as the late 'n great Mark Bellinger, gleaning constant bookings on the local club  & restaurant circuit, while also making a national name for himself by devising stunts even the notorious David Copperfield has yet to render, Jason Jewell's star is definitely on the rise.

Already performing professionally by the 9th grade, thus far Jewell has performed in venues ranging from the Chicago Pier to Venice Beach, California.  He's been chained up, handcuffed, and thrown into the Kawkawlin River, run over by a 2-ton truck, and instantly changed himself by morphing into 4 cats - accomplishments all achieved within the Mid-Michigan area within the past 18 months.

Recently taken under the wing by Toughman originator and Bay City visionary Art Dore, who hopes to help guide Jason to national acclaim, I had the good fortune to engage with Jason one-on-one, in a wildly engaging interview which, during the course of, Jason managed to make a lit cigarette disappear in his hand, take another lit cigarette and smash it into his shirted chest without burning the fabric as it vanished into thin air, all the while spending the second portion of our interview levitating about six inches off the floor in my office hallway as we chatted.

The lesson of the session, in Jewell's eyes, is simple: life is only boring if you let it be.

Jason Jewell tells me he started 'practicing' magic around the age of five, with his first exposure coming from watching magicians on TV.

"The first 'trick' I created was around the age of five when I made a coffee mug with a string attached to a piece of paper that went to my toe. I'd take this coffee mug, place it on paper, and pull the paper out of the mug in front of my parents' eyes."

Needless to say, it wasn't long before the young tyke impressed the neighbors with inventive sleight of hand light years beyond his age.

"Every time you see something you can't explain, it's magic to you," reflects Jason. "Kids for example really do see ghosts. A kid can watch Peter Pan and its magic to him - they really see him flying.  For kids, magic is entirely different than it is for adults because the world hasn't been put in a box yet. This is why it's harder to get kids with magic than it is adults," he smiles.

A true master of a myriad of card tricks, Jason points out that for most magicians, it all starts with cards. "As soon as I got a deck of cards, I was hooked because there's about 20 million different things you can do with them."

"When I was six or seven years old, my hands were too small to work with a standard deck, so my parents got me bridge cards. These were my 'toy's as a child - cards, rocks, quarters, things I'd find around the house. It does take hours of practice - so many hours that it made my Mom cringe," he laughs.

In terms of gaining true professional proficiency, Jason notes that for him that came around the early teen years. "I started seeing more magicians and investigating everything they did that I couldn't explain."

"Penn & Teller really were a huge influence for me. I wanted to be like them and emulated them, but the next big lesson I learned is that everybody has to go their own way."

"Most people don't know who the truly fabulous magicians are, because they aren't on TV.  Jeff McBride performs all over the world and Tommy Anderson from Bay City are great examples. I have magician friends that we go back and forth with in terms of ideas."

"But most of my great ideas come from my friends who have nothing to do with magic and will just say, 'You know what would be cool is if you did something like this!'  Then you go 'Yeah, it would be.'  It's easy for most good magicians to think of how to achieve something, but finding the initial idea is kind of hard."

Lesson #2:
The Art of Balance

As Jason nonchalantly pulls a myriad of card cuts & tricks out of his sleeve on my office desk, the topic shifts to the battle of maintaining that fine balance between illusion & reality on all levels of life.

"I've shown somebody an illusion - dead on in their face - and they'll be stunned. Then I'll show them as a group, and certain people are distracted with something else. You see there are two points in magic - when the trick happens and when the audience thinks it happens. This is why they call magic the art of distraction."

Is the world of professional magic a tight knit brotherhood, comprised of members of secret & veiled organizations like the Houdini Society?

"It is," smiles Jason," and actually it's funny when you experience it because it gets quite mysterious.  I did this show at Barnes & Noble with an illusion where I take the upper torso of my body off and place it on other people."

"The International Brotherhood of Magicians (IBM) figures out how it happened and approaches me and says, 'You can't be doing that because Andrew Maine was the originator of that trick."
"Copperfield redid it with both halves of his body, but needed a curtain. So I invented a system that you don't need a curtain with, along with a 360 degree levitation, which is the only one available."

"So now a lot of people want to buy it, but I don't know if I want to sell it. I've also tried it out at the Fashion Square Mall, but they said I couldn't do it in public anymore. During a lunch break I'd just finished building the prototype, so went into the food court, whistled really loud, and separated my body.

"One person screamed and they called the police. But then, I've also nailed shopping carts to my chin!"  he laughs.

"In perfecting magic, there does come a breakthrough point. A lot of my tricks may only take a couple hours to perfect, but it comes down to 'muscle memory'. The only way you develop that is by doing the same trick over and over until 4 or 5 AM."

After stints on the West and East Coast, Jason moved back to the tri-cities a couple years ago and likes to consider himself 'Mid-Michigan's Magician.'

"I much prefer the pace here than I do out West. I know magicians out west that burned out, gave it up, and are running ordinary businesses now."

"Everybody told me I couldn't get work here, but there's only one establishment on Hamilton Street I've yet to perform at, and I perform regularly at The Coast on Gratiot in Saginaw very Thursday & Saturday night, Hooter's in Saginaw & Bay City every Wednesday & Thursday, The Stables, and a host of other venues.

Jason has also performed his magic on TV and talk shows, nationally and locally, and with his new alliance with Art Dore, is preparing for a national tour.

He's also recently put out an instructional DVD on cigarette tricks that is a "big thing" in the magic community, especially insofar as nobody has done it yet.

Given such an impressive resume, can anybody truly doubt the power of magic?

Lesson #3:
Belief is the Essence of Magic

"I much prefer the pace here than I do out West. I know magicians out west that burned out, gave it up, and are running ordinary businesses now."

Jason admits that the most challenging thing about his life centers around the fact he works about 30 hours a week doing magic, with the majority of that time spent driving from one end of the state to the other.

"I'm booked all year long, but only work a few hours in each location, so when I get home I'm pretty exhausted."

"I'm fortunate because this is the only 'job' I've ever had to have," reflects Jason. "Magic has been very kind to me. I love going to see live bands, but I also like going to club and just surprising a table of people."

Indeed, Jason's first meeting with the venerable Art Dore centered on just such an encounter.
"I went to The Stables to do some magic," he explains, "and didn't know who Mr. Dore was. Somebody pointed out that he owned the restaurant & club. I thought I'd impress him with some of my magic, so picked up his fork and liquefied it right in front of his eyes. In retrospect, I'm lucky he didn't take my kneecaps off!" laughs Jason.

"But he was great and said, "That's pretty cool. Can you perform that in front of everybody? Afterwards we met and he asked me to come up with a budget. I'm like, 'Excuse me, but do you mean whatever I can come up with you'll be willing to pay for?'

He said, "If you could have any illusion what would it be?"

So now, I'm coming up with the 'Smoke Chamber', which I can't say anything about, but is a creation that really excites me."

"Basically, people want to believe in magic," sums up Jason. "The simplest way to put it is the reason why it works. Because from the day you are born you get a set of rules that you can't break.

Each day we grow we get more used to those rules until a circle of habit and pattern develops with one's self."

"If I can take that pattern and change it, just for a second, break it into pieces - then I win. It's hard to explain, but my inspiration comes form taking what you are used to and changing it - transforming it - into something completely different."