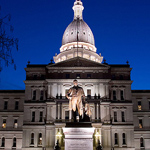 In the closing days of 2013, long-time Michigan political pundit Tim Skubick opined that a "disease" was affecting Lansing: "tax-cut fever."

In the past year, lawmakers here have talked much more about how to reach deeper into the pockets of Michigan citizens. They've done some actual reaching, too — and Michigan politicians aren't the only ones.
For example, the current year state budget approved last spring contains $82.6 million in new or higher fees on families and business. The politicians may not call these "tax hikes," but the result is the same: more dollars are flowing from our pockets into government coffers.

On the talk side, several increase proposals are under active consideration, including House Bills 4202 and 4203 to impose sales taxes on Internet transactions. Both bills are pending on the House floor, which means they could be brought up for a vote at any time.

Michigan legislators will counter that they also enacted one tax cut on cars purchased at new car dealers when the buyer has a trade-in. Gov. Rick Snyder signed this into law even though earlier he had reportedly disapproved of such "boutique" tax cuts. Don't rush to the dealer yet though — the measure kicks in gradually over a 24-year period! Unless later politicians just suspend the phase-in.

In October 2007 — less than 7 years ago — Gov. Jennifer Granholm with the help of the Legislature increased the Michigan personal income tax by 11.5 percent, from 3.9 percent to 4.35 percent. As part of that deal, Michigan citizens were promised their tax burden would be rolled back to 3.9 percent, or basically 0.1 percentage point per year at a time. That "tax-cut fever" never took hold and the Snyder administration delayed to 2013 the first cut and then stopped the rollback after a single 0.1 percentage point decrease.

And all of this is just at the state-level.

2013 began with America heading over the so-called fiscal cliff: the expiration of temporary Bush-era tax cuts, plus higher payroll taxes as due to the expiration of a temporary social security tax cut (employees' share went from 4.2 percent to 6.2 percent). In 2012, the Tax Foundation estimated Michigan taxpayers would lose 4.63 percent of their income as a result of expiring income and payroll tax cuts..

All of which raises an important question: How much do tax hikers think is enough? Does government really deserve 50 percent of its subjects' earnings? How about 70 percent? Why not 90 percent?

Recent polls suggest that increasing numbers in the "We the People" class believe that government already takes too much from us to do too much to us, to paraphrase a line attributed to Margaret Thatcher.

Members of the Political Class should get with a program of scaling it back so that individuals can keep more of what they earn, not to mention more of their dwindling liberties. That would be a recipe for real recovery, not an election year gambit.