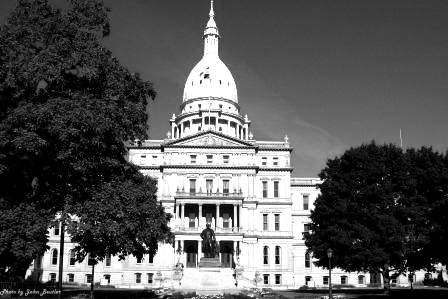 Bay City's Mayoral race between incumbent Chris Shannon and challenger Kathleen Newsham has heated up significantly over assertions made by the respective candidates in the Mayoral Forum that appeared in our last edition of The Review.
Bay City residents have witnessed significant increases in their utility rates over the past few years, especially for water & sewer services. According to Shannon, electric rates are on average 20 percent lower than that of comparable cities; and the water rates at $3.18 per CCF are also lower than many of the other city & townships in the area. For Shannon, the sewer rates are what pose the biggest challenge.
Both candidates agree that the biggest drivers of increases for wastewater treatment are MDEQ and EPA regulations demanding tight constraints on pollutants in the effluent, which resulted in the city being forced to absorb a $43 million dollar upgrade mandate.
Given that the Federal Government has already subsidized the coal industry to the tune of $4 billion dollars this year, which is a key source for pumping mercury into the environment; and with equally noxious compounds involved with natural gas exploration, one would think in a logical time polluters and those responsible for the contaminants would be expected to pay for the upgrades; but because we live in illogical times, this cost is one of many that have been passed over to the beleaguered taxpayer.
In last issue's forum, Shannon stated that he would “veto any increase that hasn't had proper diligence done in finding all available gains in efficiency.”
Newsham, however, states that she recently voted for a 9.5% increase in water rates that Shannon vetoed in favor of a 15.8% increase, which Shannon denies, stating to The Review, “I would never be in favor of a 9 or 15 percent increase.  I think my record has been extremely consistent to keep water rates low. I will veto any rate increase without proper diligence as to cuts.”
After this exchange appeared in our last edition, Newsham supplied The Review with a copy of two resolutions documenting the vote on this issue. Additionally, she made the following statement: “The smaller increase in our water/sewer rates I voted in favor of was vetoed by Mayor  Shannon and the second increase request for a higher rate was passed by the Commission, minus my vote and upheld by the Mayor.”
“This is public record,” states Newsham. “This is also one more reason I have decided to become a candidate for the office of Mayor. The people need to have someone who will be honest with them.”
When confronted with this allegation and asked about the documentation, Shannon rebutted with the following:
“It takes six votes to overturn a veto. There were eight votes for and one against in the most recent increase that she refers to. I believe the reason for this shift is because this particular measure included a low-income discount piece, which a 'veto proof' majority favored. The fact that I didn't veto it doesn't mean I support it. I just knew that the veto would have been overturned.”
“Chris states clearly that he will veto any increase,” counters Newsham. “Other Mayors, including myself as a former Mayor, have vetoed actions by other sitting commissions, even with a veto proof vote. It is called courage.”
“Newsham states that Bay City needs a Mayor that will unite not separate,” concludes Shannon. “I agree with her and this is proof that the better 'unifier' might be me. It's clear that she is posturing to make it appear that she is suddenly in favor of fighting for low rates. But her voting history is the real proof of her position, which has supported rate increases consistently without a fight. Now, who's being honest with the people?”
Schuette On Duty for Big Polluters
Speaking of environmental contamination, not content to subvert the will of Michigan voters as it pertains to the Michigan Medical Marijuana Act, State Attorney General Bill Schuette - acting in your name and on behalf of our entire state - has just joined a lawsuit to let big polluters dump millions of tons of arsenic, mercury, and other life-threatening toxics into the air we breathe.
With 225,000 Michigan children already suffering from asthma, there is no excuse to make it harder for them to breathe. The Attorney General's decision is reckless and after years of hearings, studies and public comments, there is no reason to delay curbing dangerous emissions into our atmosphere. According to the EPA, blocking these clean air protections will have devastating health consequences across the nation, including 17,000 premature deaths and 120,000 cases of childhood asthma symptoms - not to mention the added 'unseen' costs of increased medical costs for those affected.
In our opinion, Schuette should be protecting the public health instead of the profits for major polluters, not attacking it.
Saginaw City Hall Renovation Millage
The debate over The City of Saginaw's proposed $ 7 million-plus renovation for City Hall that is on the November 8th ballot continues to rage, especially given years of neglect and avoidance on maintaining the structure that have escalated the problem, coupled with recent increases in solid waste services that add at least an additional $500,000 per year into the city's revenue stream that is difficult to account for.
With the City Hall renovation in Bay City, most of their costs for renovation are being covered by insurance - so if the roof is leaky, the insurance coverage will repair it. Why isn't the same true in Saginaw?  But apart from that, the cost to Bay City taxpayers for their overhaul is coming in at around $3.3 million.

Indeed, some items such as artwork have a cost that is 'yet to be determined'