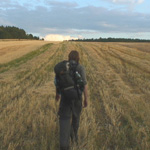 The movie industry keeps one busy and Lee Kazimir is a great example.

Maintaining day to day operations with all he has going on, Kazimir happened to get in touch with The Review last minute via Email to answer some questions about the movie More Shoes, in which he directed. The film will be featured at the Hells Half Mile Film and Music Festival in Bay City Oct. 2-5. This is the first film he has made.

Review: Tell us about More Shoes - obviously, I haven't seen the movieŠ

Lee Kazimir: More Shoes is a first-person documentary about a walk I took across continental Europe entirely on foot, from Madrid to Kiev. It's a film about how travel at a snail's pace can change the way you see the world forever.  It's about looking at the world a little more closely, and opening oneself to the lives of other people around us."

Review: Has it been in many Film Fests?

Kazimir:  It's been challenging to take a personal experience, something so large and life enveloping and cut it down to a 70-minute piece of entertainment.  But I've also enjoyed the responses I've gotten from audiences, from people who can relate to the subject matter and feel they've taken the walk with me.

Review: Do you also work on major Films? If so, what are some highlights?

Kazimir: "I haven't worked on anyone else's films, just my own."

Review: What is in the future for More Shoes and yourself?

Kazimir: I'm setting up a limited theatrical release and a DVD release for next year.  As for myself, I need to center myself in my life, to turn away the shadows that seem to be stalking me this year.  I will make more movies."