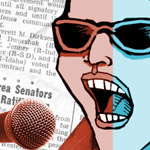 On a cold January Friday night, bodies crowded into Court Street Gallery in Old Town Saginaw. Some people had come from Bay City, Midland, and even as far away as Mt. Pleasant, and the seats which had been set up in rows earlier in the day, quickly filled up until it was standing room only.

People who couldn’t fit into the main gallery room, crowded around the doorway, leaning in to catch what was going on. The night opened with a half hour of music by Jim Pagel, during which attendees mingled, drank wine, and checked out the current exhibit of work on the walls. Then the main event of the night began: poetry.

The first Last Friday event was a success, and February’s event another, bringing together musician Mike Beasley with poets Tom Laverty of Saginaw, Hazel McClure of Grand Rapids, and Aaron McCollough of Ann Arbor.

The event is the brainchild of Paolo Pedini, who co-owns the gallery with his wife Sarah. He explains, “There is common ground between poets, musicians, and artists. They are all artists of different backgrounds, and they can feed off of, encourage, and learn from one another. Also, when artists and poets work together and share events like this, the success and the reward are greater.”

The formula of bringing together art, music, and poetry is not new. This is something the Magic Bean has been doing successfully in their First Friday series, and the First Thursdays Gallery Walk in Bay City often features poets too.

Pedini acknowledges that these events have served as inspiration. However, the spin at Court Street Gallery is a little different. “I wanted the focus to be on the poets, for this event to really be for them. Art and music are part of it too, but art and music already have their own venues,” says Pedini. “And the other events feature all local poets, which is good. It is important local writers have venues to showcase their work, but here we are bringing in emerging and established poets from outside of the area, which increases the diversity in the type of work being showcased, and it gives people in this area an opportunity to see poets who they wouldn’t normally get to see.”

Saginaw-based poet and Review contributor Gina Myers is in charge of booking the poets, and she has already filled out most of the year, calling on poets she knows throughout the United States.

“When I moved back to Saginaw a couple of years ago, I was really happy to see there was so much going on in the arts community here. The events regularly have a really good turnout, but I was a little nervous about whether or not there would be support for poets coming from out of town,” says Myers. “So far, this hasn’t been a problem. People appreciate the arts and have been coming out to show their support. The arts are alive and well here.”

Pedini has also been pleased with the interest and support from the community. He says, “We are really happy to have something like this in the City of Saginaw, and specifically in Old Town. I don’t know the last time there was a regular poetry event in Old Town—the Red Eye used to do something but I don’t know when that last took place.”

Lifetime Saginaw resident and educator Tom Laverty is also glad to see a reading series such as this in Saginaw. “Saginaw once again has a reading series with regionally and nationally known poets. It’s a gap that needed filling,” he explains. He also thinks local poets can learn from the experienced poets who come to town. “It’s important for poets to see how other published authors present their work.”

But as Pedini stresses, it’s not just poets who benefit from this event, it’s the whole artistic community. Stopping into the Court Street Gallery on a last Friday of the month is sure proof that the arts are alive and well in the City of Saginaw.

Here is the schedule for the next few months:

Last Friday takes place on the last Friday of each month at 7:00 pm at Court Street Gallery (414 Court Street, Saginaw). Entry is $3.00. For more information on this event and others at the gallery, visit http://courtstgallery.com.