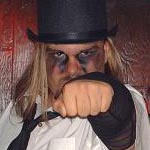 Sometimes it's ironic what can happen when you throw a band together for a joke.
Get out the drag, slap on some makeup, lock into that '70s retro, let loose on the dance floor and you might feel like you're onstage with The Beefy Sloppy Gypsies.

The Gypsies have a handle on elements of retro and slapstick in the current rage of musicianship and good times within the Tri-Cities, exclusively available each and every Wednesday night at Bemo's (soon to be Crossroads) in Bay City.

All under the age of 21, Terry Poirier (drums), Drew Brady (vocals), Ben Alcorn (guitar), Rayce Ribble (bass) have turned something that was initially just for fun, inside out.
"You know it's funny because when we started out around 2004, it was myself, Ben, and Terry (Rayce came into the picture about two years later) and we put together a band called Matchstick Mafia," explains Brady. " We had every intention on being a serious project. What it ended up being was a huge disaster."

Then this past spring, what started out as a farewell flip of the bird, began a new trend.
"After about nine months of trying to start separate projects, Ben, Terry, and I decided to join forces one last time in the spring of '07," said the vocalist. "Originally Terry and I were planning on moving away at the end of this summer, so we figured we'd get the band back together (and) goof off as much as we wanted, because to us it just didn't matter anymore. It backfired for the better.

We picked the most outrageous name we could think of, which actually derived from a fictional band name that Ben had made up in career mode on Guitar Hero. So the 'Beefy Sloppy Gypsies' were born. This has been some of the most fun we've ever had performing live."
Taking the outrageousness mode one step further, the band tore a page from the glam rock book.

"We wanted to do something that would bring people to the show," continued Brady. "So we went to Bemo's bar for their Sunday open-mic night around mid-May, decked out in skirts, stockings and more makeup than any post hair metal era man should wear.....and they loved it! They loved it so much that Bemo's invited us to play another open mic night the following week. The bar was standing room only that next week (and) they offered us a weekly gig on Wednesdays. The Moral of the story is have fun and never take things too seriously.  Our 'serious' band fell flat on its face and our 'joke'   band landed us a permanent bar gig."

With the Beefy Sloppy Gypsies in full swing, the music covers classic rock songs from one end of the map to the other.

"We actually have fun playing covers," said Brady. "I think we all have the drive to do original material someday, and Rayce is doing original stuff now with his other project Saturday Morning TV, but for this band it just wouldn't work. The drag really has nothing to do with the music at all. It's just an outrageous little gimmick that we do from time to time to bring people to the show."

"As far as our best tunes go, the songs that get the biggest reaction are Suffragette City (David Bowie), Little Willy (Sweet), Anarchy in the U.K. (The Sex Pistols), and Smokin' In The Boys Room (Brownsville Station/Motley Crue). We like to get the crowd involved and they seem to react very well to singing with us."

The group influences run just as wide. In the big dream, the band feels they would best be presented opening for Aerosmith. Brady is influenced by REO Speedwagon, Guns N' Roses, Alice Cooper, Velvet Revolver and Black Sabbath. Alcorn's influences include The Doors, Led Zeppelin, Bob Dylan, Rolling Stones and The Velvet Underground. Ribble digs into The Talking Heads, The Pixies, The Replacements, Frank Zappa and The Smith's, while Poirier's influences include Led Zeppelin, Aerosmith, The Beatles, New York Dolls and UFO. Booking the Gypsies outside of Bay City has been a difficult venture for the group, even with the constant standing-room-only’ nights.

"Other than Bemo's, the Tri-City bar scene has not been kind to the BSG," Brady divulged. "We pedaled our demo to nearly every bar that takes bands in the area and we've either been laughed at or given little or no consideration. It seems like every time we went into a bar the person working would be like, 'Oh, that's interesting. I'll make sure the manager gets it.' And as soon as we left they probably chucked the demo into the trash. I think the drag thing and the fact that we aren't a household local band’ really turned people off to us. The fact that none of us are 21 yet, may have been a turn-off as well."

With the success of the project, the band has decided to change their course for the remainder of the year.

"Ben, Terry, and I have been like metaphorical boomerangs toward each other over the last three years," said Brady. "Whenever we try to go our separate ways, we end up coming right back and playing together again."

"We've been having so much fun with the project that Terry and I have put our plans of leaving on hold until at least the end of the year. You just never know what the future will bring."