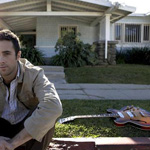 With Some Kind of Comfort, Jay Nash recalls a Los Angeles thought to be long since extinct, a romantic dream land where inspiration flowed from one artist to another with songs about late nights, friends and lovers, songs which grew organically and were created spontaneously. He's a throwback for sure, smart with a hook, and brave enough to bare the fragile truth in a song.

His debut for KUFALA Recordings, Some Kind of Comfort, is a document of Nash's rising star, as well as a personal diary. It's an album rooted in the classics-Cat Stevens, the Dead, Dylan-but breezy and airy enough to swoon fans of acoustic pop from coast to cast. Mixed entirely to analog tape, the album exudes a warmth rarely found in many of today's recordings. As Some Kind of Comfort chronicles the lives of conflicted lovers, it wears the influence of the past few years in which Nash's world has gotten increasingly hectic and, at times, complicated

In 2002, after scoring gigs and kicking off a Monday-night residency at what was then called Bar F2 (now known as Room 5), Nash started booking other bands at the club, and quickly thereafter began forming tight friendships with many of the artists that he looked up to. In a sense, Some Kind of Comfort, is the embodiment of the singer/songwriter scene Nash helped create through these Room 5 residencies and song-swapping sessions.

This musical awakening came after a few years of searching and wandering. Nash graduated from the University of Vermont in 1998, bummed around upstate New York, New York City and Jackson Hole, Wyoming, hung out with friends, played gigs and released two self-made recordings, including 2002's Open Late.

But, it wasn't until his gigs at Room 5 and another L.A. singer/songwriter hotspot, Hotel Café, that he began to get serious. Between Room 5 and Hotel Café, Nash says, "I suddenly found myself surrounded by the kind of musicians and songwriters that inspired me to start playing music in the first place. In contrast to many of the shows I had witnessed around town previously, people were actually listening to each other. It was organic and spontaneous. Tempo, harmony and arrangements would vary from night to night depending on the crowd and energy of the room. To me, that's music."

What's more, Nash was finding that he was evolving as a songwriter. "I think I started telling the truth more. I started to open my eyes more, and I'm not really saying something unless there's something that needs to be said."

His two and half year residency at Room 5, the growth of the singer/songwriter scene he helped create, an affiliation with and support from equally talented musicians have all combined to create a new chapter in Jay's life and career. If Some Kind of Comfort is the indication of Nash's musical awakening, then the next few years should see him wide awake and heading toward a whole new level of success.

The Art of Poetry: Visually Reminagining the Poem