INVISIONS MUSIQ in the Spotlight 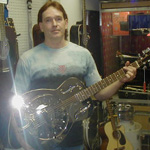 Not so very long ago the Tri-Cities was populated with a divergent chorus of more music stores than you could shake a drumstick at.  But just as the boom of the Internet, consolidation, and the growth of the 'big box' warehouses impacted small Mom & Pop businesses throughout the United States, so too did it take its toll on many smaller yet more specialized music stores in our area.

Armed with a fistful of courage and a family legacy of experience in the business, Mark Cowgar recently took it upon himself to unveil Invisions Musiq, a fully equipped and full service music store selling new & used musical instruments ranging from electric & acoustic guitars to amplification, drums kits, and band instruments.

With an interest in music that blossomed as a teenager, Mark was able to learn a lot from his father, who developed Cowgar's Music and eventually started producing his own line of pedal steel guitars.

An avid guitarist, bassist, and keyboardist, Mark is currently acting guitar-slinger for the rock outfit Behind Bars and says he started Invisions with a simple goal.

"The idea was basically to help out other musicians and provide affordable pricing to various instruments," he explains. Also a Muzak technician for six years now, Mark opened Invisions 5 months ago, recognizing the important of location.

"Right now you have Guitar Center in Saginaw and Mid Michigan in the south Midland area, but there really wasn't anything available or convenient to people living in the north Midand area," adds Mark. "Plus, because we're not as big, it allows us to offer our instruments more affordably, while giving us room to expand."

"I don't think any store can afford to specialize in any one thing, " he adds, "so my goal is to provide enough variety so people have a choice in their gear, while also providing different varieties of instruments like keyboards, drums, guitars, and amplifiers, as well as band instruments like saxophones, clarinets, trombones, and school band supplies."

When asked about how he came up with the name for his new store, Mark smiles and says, "Well, music is therapy for a lot of people, it follows a vision outside of your everyday world & problems. Many have a vision of becoming a rock star; as for myself, I have a vision to help people."

"What we don't have in the store we can quickly order," notes Mark. "Mainly our goal is get what people need at very competitive prices. On a lot of our gear we can offer 20 percent discounts right off the top."

With all new merchandise guaranteed for workmanship & parts, if people are interested in upgrading, Mark will buy back their instrument and upgrade them into a higher level.

"We're selling Crestwood Guitars at $99.00 right now, which is great starter instrument," notes Mark, "and also offer Oscar, Johnson, and Dean guitars, as well as used Gibson, Epiphone and Jackson, along with Peavey and Marshall amps, and we'll also sell equipment on consignment." Additionally, lessons are available on drum and bass, acoustic, or electric guitar, and D.J. Lighting and Karaoke players are also available. In-house repairs are available along with guitar set-ups, adjustments; and if you're in the mood, you can even buy a violin!

"I've had great feedback thus far," smiles Mark (no pun intended). "Music is a great character builder and offers an immense sense of enjoyment, so it really isn't work for me."

"It may take us three to five years to show a profit, but we're doing well in a challenging economy," concludes Mark. "That is why customer service is so important to us. I really want to stress that fact - we make sure our customers are satisfied."


Invisions Musiq is located at 6831 Eastman Ave., in the Fairview Plaza behind 'Damon's Restaurant in Midland. You can contact Mark about all your musical needs at 989-631-6969.