Posted In: Culture, Community Profiles,   From Issue 718   By: Gina Myers 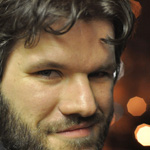 When it came my turn to introduce Matt Bell at his reading at the Court Street Gallery in December, I introduced him as a current literary "it" boy, a title I still stand by. In this past year, when considering the landscape of contemporary American literary fiction and independent press publishing, Matt Bell's name has been everywhere—from the editorial work he does at the online magazine The Collagist, to being the series editor of Dzanc's annual anthology Best of the Web, to the book reviews and blurbs he writes promoting other writers, to his own work published in numerous literary magazines and anthologies, in chapbooks, and finally in the form of his first full-length book, How They Were Found, which has been positively reviewed all over the place.

Since its release in October, Bell has been out on the road promoting his new book, giving readings in Baltimore, Pittsburgh, Providence, Chicago, and at Penn State. But it was at the reading in Saginaw where he saw a number of familiar faces in the crowd—many family members and old friends—since this was very much a homecoming for the young author. Though he was born in Muskegon, Bell, at the age of one, moved with his family to Hemlock. He grew up and graduated from high school there, and later worked, lived in, and attended school in Saginaw. Now the thirty-year-old resides in Ann Arbor with his wife Jessica.

Back at Court Street Gallery, Bell read one short story from his collection, "Her Ennead," and one new short story not included in the book. The crowd was captivated by his reading style, which was exciting and rhythmic—a rush of words building with a clear emphasis on the sentence as a unit of meaning. His reading was poetic, perhaps stemming from his writing practice. "I read aloud constantly when I am drafting and rewriting, and I trust my ear to tell me what's working in the language and acoustics," he explains.

Bell describes the experience of seeing his book for the first time as surreal. He says, "The best experience is seeing it in other people's hands. That's the part that still seems completely unreal, and also amazingly gratifying. And from the various interviews and reviews that have ran about this book, and from its appearances on a number of writers' year-end lists, it appears to be making its way into a lot of people's hands.

Published by Keyhole Press, How They Were Found, which collects together thirteen short stories, demonstrates Bell's range in interests and styles. His interest in science fiction is well represented in stories like "The Receiving Tower" and "Hold On To Your Vacuum"; his interest in fairy tales represented in "Wolf Parts," which offers numerous variations on the Little Red Riding Hood story; "The Cartographer's Girl" has a magic realist feel to it; and historical fiction is represented in "The Collectors," which is inspired by the real-life story of Homer and Langley Collyer. Further, "An Index of How Our Family Was Killed" experiments with form, while "Dredge" is a more traditional realist narrative. Even when the worlds Bell writes about are strange or different from our own, the voice of the stories and the details render those worlds complete, immediate, and recognizable.

The author got his start toying with science fiction and fantasy stories in middle school—influences that have clearly stuck with him—but then he stopped writing and didn't pick it up again until college. Bell started out at SVSU, and it was there that he met Daniel Snyder, a teacher of his who was also a writer. Bell recalls, "I can't remember us ever talking about fiction—I had him in a composition class, and other than knowing that he was a writer himself, I'm not sure it ever came up." He continues, "I dropped out of school for a year or two, and during that interval started writing short stories of my own, and when I went back to Delta I saw [Snyder] in the hall and asked him if he'd be willing to talk fiction with me. Thankfully, he was, and his help and encouragement in that first year or two of my career was unbelievably crucial."

Bell acknowledges that the first stories he wrote came out of him being a hungry reader and not knowing where to get more books like the ones he liked: "I wasn't writing because I had something to say: I was writing because I didn't have anything to read."

After Delta, Bell finished his degree at Oakland University in Detroit, and then he completed a Master of Fine Arts degree at Bowling Green State University in Ohio. During this time his commitment to writing grew as did his involvement in various literary communities. He began working for Dzanc Books, a publisher based in Westland, MI, as a member of their Writers-in-Residence Program, which, Bell explains, "places authors in public schools throughout the school year, then produces an anthology of student literature." For three years he taught fourth- and fifth-graders at Thurston Elementary in Ann Arbor, during which time he also started the Dzanc web magazine The Collagist, and took over the Best of the Web series. Now he works for Dzanc full-time, editing books and doing marketing, design, grant-writing, and other tasks. "It's a great place to work and a press I'm very proud to be a part of."

With all of this work, it seems like finding the time to focus on his own writing would be difficult. And while Bell admits to "always [being] a little out of control," he prioritizes his own writing, devoting two to three hours each day, seven days a week to it. "Whenever I can, I write as soon as I wake up, before I do much else."

In addition to his devotion to writing, he also finds time to voraciously read, which he says is an essential aspect of being a writer. When considering advice for people interested in pursuing writing, Bell says, "I think the most important task any writer can engage in—beyond the writing itself—is to become a hungry reader. All the big leaps forward in my writing were related to reading as much as they were to the practice of writing. Among all of the writers I know, the ones who are doing the strongest, freshest work are the ones who read the most, and also often the widest: read fiction, of course, but also read poetry, read philosophy, read history and science and lit theory and whatever else you can get your hands on. It all applies, and it all accrues to make you better. There's no way to get to where you need to be without doing it, and doing it constantly."

His own favorite authors are always hard to identify because he admires so many writers. "Denis Johnson has been a long and constant favorite, as have Brian Evenson and Dennis Cooper. Cormac McCarthy, Christine Schutt, Aimee Bender, George Saunders, Raymond Carver, James Tate, Amy Hempel…I could go on and on. There's a lot of bad writing out in the world, of course, but there's so, so much work that truly is strong and lasting, and worthy of our time and attention." He adds, "I read constantly, but I know I'm just scratching the surface still."

In the New Year, Bell is preparing to hit the road again to further promote his book. "There are so many great literary scenes around the country, and I've been really lucky to visit the fantastic readers and writers who organize and attend all of these reading series," he says. "There are lots of good people heavily invested in the making and enjoying of art all across the country, and getting out on the road is a great way to be reminded of that."

He currently has a second book finished and is just beginning the process of finding a publisher for it, and he has a third book in the works. As far as the future of his writing career goes, Bell hopes to continue to grow and become better overall. "I just want to keep writing better and better books. I want to become a better reader and a better editor and a better teacher, and to keep becoming a more active member of the various literary and arts communities I'm a part of. There's always more I can be doing better, and I'm trying hard to try my hardest."

How They Were Found is available for sale through Amazon.com and BarnesandNoble.com. For more information on Matt Bell, visit mdbell.com. Also, check out Dzanc Books at dzancbooks.org.