Inside the Workings of THE BLUE MAN GROUP 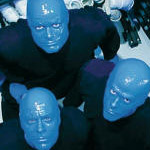 When The Blue Man Group makes their way to Saginaw's Dow Event Center on November 14th, the tri-cities will become witness to an entire new realm of theatricality, music, performance, and cutting edge technology.

Best known for wildly popular & visual shows with combine music, comedy and multimedia theatrics, a blissful and interactive atmosphere, which involves the audience, has become a trademark of the Blue Man Group experience.

With projects that vary wildly, including live productions in seven cities worldwide, and the recording of 3 albums, this Grammy nominated ensemble is hitting the stop in Saginaw as part of their How To Be a Megastar Tour 2.1.

Recently I had the opportunity to chat with Tom Galassi, a performer with Blue Man Group for over 10 years now, who says this current tour will be his last with the group for awhile, as he is departing to pursue other projects - most notably, as a producer and director of Independent Films, two of which are making the rounds at various film festivals like Sundance.

"I first saw Blue Man Group in New York City back in 1997," recalls Tom, "and in six months time was totally enamored with the Group. I saw what they were doing a cultural 'call to action' because they were so ahead of their time in the way they blended music, theatre, and audience interactivity."

As a percussionist, Tom had a strong background in music. "My Dad is a drummer and I remember when growing up that he had his drum set assembled in the kitchen, so I was always exposed to percussive music."

Having performed for over 10 years with BMG, Tom is focused and readily responds when asked what distinguishes the type of theatre employed by The Blue Man Group from traditional Broadway productions.

"I feel the stakes are much higher at BMG performances," reflects Tom, "because there is a lot of listening and reacting involved, not only with the other performers, but most importantly with the audience. You are a part of a group and the audience is also a part of that group, so it affords a lot of creatively diverse experiences. A lot of what we do really is in the hands of the audience, more so than a conventional play where you're doing 3000 performances the same way."

Through touring that has taken his around the globe, does Tom note much of a difference between European & American audiences in terms of how they react to the Blue Man Group experience?

"When we did Berlin I was amazed because the audience was very silent and extremely quiet. When we did a joke they would sit and think about it before reacting, which was very odd.  In New York City the audience tends to watch the show a bit more than audiences in Vegas, which become totally involved. And in Tokyo, they just loved us - they were cheering constantly and very animated." Given ten years of performing with BMG, is there any one performance that sticks out in Tom's mind?  "Most definitely it's when we did a Royal Variety Performance in Wales and were performing for the Queen of England. She shook all of our hands while we were in full make-up, and I remember two colors - the whiteness of the Queen surrounded by all our blue faces. And then Ozzy Osbourne came back to greet us and that pushed it all over the top!" he laughs.

With his current Megastar Tour 2.1 performances running through December 2008, and new shows for the current tour being added daily, how does Tom distinguish this latest outing of the BMG from previous tours?

"I find there are much bigger stakes at play," he reflects, "because a cornerstone of all past BMG performances has centered around the fact that the BMG strives not to 'be the show'. Whereas with this performance, the theatrical conceit is centered around the notion that the Group is struggling and forging ahead with becoming Rock Stars, which is a diametrically opposed dynamic." When asked about his departure from the BMG at the end of this current tour, Tom cites his need to continuously evolve artistically. "I've done this for so long that I'd by lying if I told you that I've figured out what it is that I find so compelling about BMG, because I don't think I'll ever figure out the entire dynamics involved that make it so compelling. Mainly, I need to pursue some new challenges, and I'm very drawn to filmmaking."
"But who knows, one day I may come back to BMG, because I know the experience never totally leaves you."

Blue Man Group How To Be Megastar Tour. 2.1 with special guest Mike Relm will take place November 14th at The Dow Event Center Arena. Tickets are available at the Box Office, all TicketMaster locations, or by phoning 989-754-4800.