I BECAME THE SKY 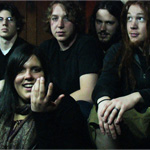 The Mid-Michigan music scene took another step into the future the day I Became The Sky decided to launch their brand of rock and roll into the state's already legendary musical stratosphere.

To mark its nearly three years on the scene, I Became The Sky is going to host a record release party on Saturday, Feb. 21, at the Hamilton Street Pub with many guests. A band not only well known in circles for their brilliant progressive Indy sound, but also for being a stepping stone for up-and-coming groups as well, they are rounding out the evening with Feel Good Violence, A Machete Fight, Ephus, John Vasquez, Peninsula Rising, Life Size Ghost and By Popular Demand.

"Pretty much every show we try to play, we try to make it as big of an event as possible," said guitarist Joe Bonham. "It was super, super hard to break into the scene even here, let alone to go around and tour. It was amazing the support we got. We've had relentless support from all the fans, venues, people we meet, writers, radio stations, and that's probably the biggest thing that we can say thank you to, because if it wasn't for people helping us we wouldn't be able to do what we love."

"Mixing and editing took about a year," laughed the guitarist.  "That's because we all work and it's tough to get together. We all work day jobs.

"We recorded the record at our drummer Chris Marks production studio. It's called Maylapse productions. He was actually fortunate enough to win a sales contest from Guitar Center and they flew him out to California and he played poker against some other guys and won thirty grand and he bought a studio. He went to Musicians Institute out in Hollywood for five years and did a fantastic job for us."

I Became The Sky has the true Indy DIY spirit (do it yourself!) as they have recently put together their own tour.

"Saginaw has got one of the best music scenes," said Bonham. "We went on tour Sept. 24, to Oct. 4, with our friends Life Size Ghost. We played in Chicago five nights in a row and it was like blown away by the talent from Saginaw, compared to the big city (bands). I thought we would be playing with some heavy hitters and everybody was kind of like…?"

Having gone through the proverbial member changes, Bonham has wild, yet mixed emotions on this chapter of music coming to a halt.

"It was such a crazy time in our life of the band, it's weird putting this out. Our original singer and rhythm guitar player moved out to Portland, OR, and he's not going to be here when it comes out. And the kid playing with us now, TJ, isn't even on the album. It's crazy how everything laid out, but I wasn't going to stop. It's tough to get a collaborative effort of people that love it as much as each person and want to do it as much."

The group also saw original drummer Joe Luplow move down to Murphysboro, TN, where the band now plans on relocating to in the coming months.

"We'reactually moving out there, me, Mike and Elissa at the end of May," indicated Bonham. "Mike and I are going to go to audio engineering school in Nashvilleand Elissa is going to music school in middle Tennessee. We're going to getback together with (Luplow) and just keep going from there. We'll definitely becoming back and play White's and the Hamilton St. Pub, all of our favoritehometown spots."Bonham said that while they are here, they plan on making as much noise aspossible.

"It's my favorite thing to do in life and brings the most enjoyment to people that I could ever bring," he said. "I don't think there is anything else I can do in my life that can make people happier. Especially for myself—I work construction (and) I'm not itching to go hammer nails! I think everybody's got to pretty much have something to fall back on, but I never give up the dream. It makes me feel gross when I am not playing."

Bonham wanted to play more and put together another project.

"Mike, Elissa and I started an acoustic side project, Joseph and the Giants. Our first show was at White's last Saturday night (2-7-09). We do a bunch of really weird covers like The Cure, Pat Benetar, and obscure stuff that we like."

Bonham also says a huge part of I Became The Sky's success is the fact that he and Lord push each other to be the best they can musically.

"It's so cool for me and my girlfriend to be able to play together," said the guitarist. "A lot of people don't get to do that. We've been together for five years and the week after we started dating we started playing together. She is classically trained and got accepted to Julliard, but didn't go because that's not what she wanted to do. And I'm like—no theory, no idea what I'm doing and don't even read tabs. It was really weird. We pretty much brought each other out of our shells. She didn't think she could improv or write because she was so structured in her life as a musician before she met me and now I'm like ultra tight because she makes me!"

With the music starting at 6 pm, 21 and older can get in at the cost of $3, while 18 to 20 can check it out for just $5.  "If you can get one person to dig your stuff, you're doing OK," said Bonham. "You've got to earn the ears before you can earn the dollars. I think that's what its all about anyway."