Honesty & Dean: A Musical Match Made in Heaven 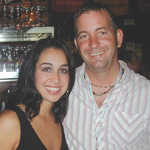 There exists a quality behind the musical alliance configured between a man and woman that carry a poetic power that are timeless.  Born upon the wings of Biblical mythology dating back to Adam & Eve, some of our most valued milestones in music consist of this seemingly simple pairing of the sexes - think of the jazz styling between Steve and Edie, or Ella and Louis; or the fragile folk of Ian & Sylvia; or even the early pairing of Lindsay Buckingham & Stevie Nicks before Fleetwood Mac discovered them, and the point becomes clearer.

Whether it centers around the ability to convey the full gamut of emotional terrain unique to each sex into the expressive power of song in a manner that conveys the simple union of humanity, or is simply a matter of the beauty that can be conveyed sonically between the low and high registers on a scale, there is a 'spark', if you will, that few other musical couplings - whether quartets, ensembles, or choirs - can convey.

I mention all this because I believe it fully frames the unique opportunities enjoyed creatively between Dean Vanston and Honesty Elliot, a pair of homegrown talents that joined forces three years ago to perform at a Christmas party for CMW Real Estate.

Vanston, of course, is no stranger to our cultural climate.  He broke onto the scene with a bang as lead guitarist and creative dynamic for the seminal new wave act Water for the Pool, went on to perform gun-slinger duties for the widely popular Mick Furlo Band, and then formed the creative nexus with the late Nick Andros for the ground-breaking musical creativity of Poke.

Honesty, on the other hand, is a definitive newcomer to the Tri-City music scene, even though she started singing at weddings by the age of 14. Possessing shimmering raven hair and wide luminescent eyes, when lyrics flow from her lips and radiate upon the registers of her three-and-a-half octave vocal range, it is easy to see why Dean 'the Veteran' hooked up with Honesty harvested talent.

When asked about their origins, Honesty explains, "I had three years of formal voice training and sang in choir all through high school, moving on to the Saginaw Choral Society for a few years. Then I auditioned to sing the anthem at a Saginaw Spirit game and met Dean around that time, expressing my desire to perform more in public."

"Poke was the last project I'd been involved in," reflects Dean. "It didn't start out with us saying let's make this into a regular alliance, but it has allowed me to change in the way I play the guitar. Water for the Pool was more punk-oriented, with Mick it was more of a polished Van Halen approach, and when I worked with Nick it was more finger-styled playing.  With Honesty it's about gaining more knowledge at playing acoustic. I've never really played acoustic that long or that deeply, so for me this alliance presented an opportunity to broaden myself, and do something different.  It turned out to be good and I feel comfortable with it."

With sixty to seventy songs in their repertoire, the duo have managed to keep their shows as fresh as they are intricate and evolving, as exemplified by their translation of such gemstones as Alanis Morissette's Hands Clean.

"When we perform, we always ask people what they'd like to hear and then we go back and try to learn it," continues Dean. "I'm trying to do more interesting things with my guitar, because I can't stand just chording. You can always fall back to that ground if you need to."

"It also helps that we're on the Internet constantly searching out new artists," interjects Honesty. "We both like the same kinds of music and sounds, and there's a lot of great new stuff coming out."

Though they've also written several original songs together, two are ready for public consumption, with Dean utilizing some ideas he's been polishing over time. "I try and write lyrics," notes Honesty, "and Dean does all the music. It's a collaborative process. He'll record and give it to me and I'll usually have a hook in mind lyrically, but might need to work on filling in the middle lyrics."

Since their early performances, Honesty's voice has improved dramatically in terms of projection and confidence, adding exponentially to the power of the combo. "When I started, I was really nervous," she admits. "But in the three years we've been together, I've experimented with my voice more than ever. I love it, it's fun, and I feel very comfortable with it."

Recently Honesty & Dean won a contest for recording time at Midland's Big Bear Studios through the Mid-Michigan Idol contest, which they say was entered for fun. "There were families with their kids there, and I didn't think we could win it," laughs Dean. "But Honesty said, 'No, we're going to win something, I feel it.' And we ended up with 1st Prize."

"One thing I'm proud about is that we have stuck to our guns with playing alternative music," continues Dean. "Wherever we perform, we stick to our material rather than selling out."

Given the way they meld together, I can't help asking if Dean & Honesty view this project as evolving into a band context, in a similar manner to the way Poke evolved with Nick Andros.
"Yeah," admits Dean. "We're talking about it. Probably it will consist of the guys from Poke, Bill Silverthorn and Chris Jarema and we'll break it out at our 3rd annual Christmas Party at the Hamilton St. Pub on Sunday, December 17th.  We'll also have Sprout performing and Noel Howland and the party will kick off at 6 PM."

"We're going to try and transition quickly but we'd like to stick close to what we're doing, with me on acoustic, probably Noel on guitar, and see what transpires. Mainly, we want to stick to basics. We've even talked about going to SVSU and getting a couple of unknown musicians, so we don't have the typical faces and can work on something that we can nurture," he notes.

"I don't feel I'm going into any strange directions with this transition," interjects Honesty. "Not a lot of vocalists have the range that I do, and I'm a soprano. I can't do opera anymore, and we first started playing, it was hard on my voice because I wasn't used to using it in a pop context. But I've never once lost my voice, so I do know I'm properly trained to use it.  Mainly I try to project user friendly choruses, but I do go off and scream and yell now and then."

In terms of challenges, the match between Honesty & Dean seems to certainly be conceived in heaven. "We get along really well," laughs Dean. "We're best friends and we put up with each other's lives."

"We've gotten into some arguments," admits Honesty, "but when we work, we work well together."

For more information on Honesty & Dean check out their Website at honestyanddean@myspace.com