HEROES FOR KIDS: Picks up the Ball on Summer Recreation 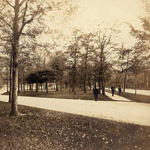 Sixty-five years ago, industrialist Frank Andersen was concerned about Saginaw's young people. He pledged $15,000 worth of concrete for a municipal pool across from Ojibway Island. The federal Works Progress Administration gave a $90,000 grant and City Hall chipped in $25,000.

With that, the original Andersen Pool was born during the World War II era.

Andersen reached an amazing 108 before he died a decade ago, but a new generation is following his spirit even during today's tough times.

Heroes for Kids has become more than the name for Saginaw County's third annual golf fund-raiser at Apple Mountain Golf Club. The Chamber of Commerce has adopted the title for an overall plan to enhance countywide youth activities, replacing the more cumbersome 'Operation Recreation.'

The young man who took the first step two summers ago, Clifton Ryan, is preparing to try out for pro football's St. Louis Rams via Arthur Hill High and Michigan State. The first friend he called, LaMarr Woodley, will try to make the Pittsburgh Steelers via Saginaw High and U-M.

They must head for their rookie training camps, but Heroes for Kids Co-Chairman Larry Preston hopes they still can fit Apple Mountain into their schedules on July 25.

"If not, we have formed some strong connections with the two universities that will make this an ongoing annual event," says Preston, Tri-Star Trust Bank's chief executive.

"I try to thank as many of them as I can," says Mayor Carol Cottrell, "but without exception they will say, no, thank you for asking us."

She leads a planning panel that will offer more young fun at the golf site. The Children's Zoo, the Fire Safety House, Dow Corning scientists and the Cops 'n Kids reading project will take part, and Field Neurosciences Institute will give away bicycle helmets.

Preston says the pair of golf outings, with related appeals, has generated $175,000 to support activities for an estimated 2,000 young people.

Outlets range from the four Boys and Girls Club centers to the YMCA to The Salvation Army.
Options run the gamut from sports to crafts to dance classes.

Fees for the golf outing are $1,000 for a four-man team, or organizers will place an individual on a team for $250. Participants may register with Mandy Johnston at the Saginaw Community Foundation, 755-0545.

Donors with smaller checks to offer may send their gifts to Heroes for Kids through the Community Foundation's office at 100 South Jefferson, Suite 201, Saginaw, MI 48607.

When Saginaw recreation cutbacks became most severe in 2003 and 2004, former City Manager Deborah Kimnble asked for community support. The Chamber of Commerce formed a working group, but leaders wanted more than a short-term or year-by-year answer.

Soon the Saginaw Community Foundation enlisted, with Culli Damuth joining Preston as a co-chair. Foundation Director Renee Johnston came on board, along with other groups and individuals.
Group members merged resources to establish a small office for day-to-day work. They hired Jamie Lewis, who started early last year after she achieved a Saginaw Valley State University degree in professional and technical writing. Lewis spent some of her childhood in the Hemlock area and some years near Birch Run, and then graduated from Reese High School. She says she has aimed to make two key points. One is that Heroes for Kids is directed toward all of Saginaw County, not just the metro area. The second is that activities may range beyond traditional sports and recreation.
"There are all sorts of opportunities," she says.

She will use her grant-writing skills to approach foundations. She also has formed links with her alma mater of SVSU, and with Central Michigan University. One concept in place in other cash-strapped communities and school districts is for graduate students to run local youth development efforts.
Heroes for Kids this month released a 165-page report that sets overall goals, such as offering after-school activities at least three days per week.

Special appendixes are tailored to communities within each of the county's 13 public school districts. Lewis and her volunteer helpers also surveyed more than 1,400 students and conducted 16 community forums.

Some of the findings are extremely specific. The Buena Vista Community Center is found to be geared more to senior citizens than to young people. Teens in Freeland are looking for tennis courts, while folks in isolated Chesaning see a need for a community center.

St. Charles is coping with bad behavior among a small element of the teens that gather at Lumberjack Park. Even prosperous Frankenmuth is faced with the shutdown of its aging outdoor pool.

Lewis reports that a key challenge is to promote more teamwork among the communities. At the forums, some speakers from outlying areas expressed concerns that the city and inner suburbs would dominate the Heroes for Kids effort.

Indeed, the city of Saginaw has a child free school lunch rate of 74 percent, but in Saginaw Township it's 29 percent and in Thomas Township it's 24 percent. Need is spreading.

Frank Andersen's first pool was an historic success in Saginaw. Old-schoolers will remember standing in long lines and paying a dime to get in. Of course, City Hall back in those auto boom times saw no need to keep track of a tax subsidy.

Or at least it wasn't publicized.

The start of the city's recreational ups and downs was linked during the 1980s to the new wave pool and water park. Mr. Andersen, by then approaching his 100th birthday, wanted to replace the deteriorating old pool.

Consultants advised that modern times would require more bells and whistles, such as a wave-making machine and those two huge slides. With Frank Andersen first offering $320,000, and then upping the ante to $500,000, it was hard for city officials to say no.

In terms of facilities, mixed results have continued. Parks such as Hoyt and Bliss are idle and
overgrown, and Garber Tennis Courts are a mess. Still, the YMCA and the Andersen Enrichment Center and the Children's Zoo have prospered, and the Merrill Park and Civitan centers have been rescued.

Brian Campbell, Saginaw High Class of '82, grew up during a time when Saginaw had 25 elementary schools and each had a summer playground. He became the Saginaw School District's community education coordinator in 1990. Since then, city government gradually has moved out of recreation sponsorship. The schools, churches and various non-profits have stepped forward.

"There are programs out there for young people, and possibly we have come back to the point where we almost have just as much to offer as during the time when City Recreation ran all the playgrounds," Campbell says.

"At the same time, there are differences. We no longer have that one big umbrella through City
Recreation and today's activities are provided by a larger group of sources, so families and young people have to hunt harder to find them. Also, unfortunately, there are more instances in which the providers need to charge fees. And young people have different interests these days, such as working on computers." He says leaders of various projects need to work together closely. For instance, one site may excel at offering traditional recreation while another is stronger with arts and crafts. He suggests that these two sites could 'swap shitfs' one day per week.

Campbell has worked with other providers to produce the annual 'Hot Times' summer youth activities book, featuring a neon yellow cover with a cartoon of the sun wearing sunglasses. If you can't find a copy, call him at 399-6944.

One of the goals of the recent Heroes for Kids report is to issue the booklet every three months rather than once per year.

The publicity and the funding are positive but the various efforts still lack adult volunteers and
mentors, says the Rev. Hurley Coleman Jr., a steering committee leader.

"It's obvious that our young people are not a priority. There hasn't been any anger out there over the lack of youth programming, no major outcry. We know there's a need, but there are people in positions who don't want to lead, and they don't want to get out of the way either," Coleman says.
Past and present City Council members cut the recreation budget as low as $10,000 two years ago, down from $800,000 before the turn of the millennium.

This year's sum is $25,000. Softball players and coaches complained that the city would'’t even pay for Hoyt Park's light bills, and this year they departed for the suburbs.  Joyce Harvin, who used Hoyt’'s fieldhouse to coordinate playground volunteers last summer, says City Hall sent her group a $1,000 utility notice even though air conditioners were not in place.

Jeff Oppermann, owner of Oppermann's Cork 'n’ Ale, four summers ago raised $5,000 to support Knothole youth baseball at Hoyt. City support was not forthcoming and the program died two summers later, which he describes as "a shame."

"We know the city doesn't have the money, but they don't even have one person on staff who is
responsible for recreation," Coleman says.

"Meanwhile, we have people who might make a donation one time a year, but if you ask them to give some time, that's when you have a problem."

Larry Preston says he is not offended by Coleman's remarks, even with the success of Heroes for Kids. In fact, he offers similar thoughts.

"Our second phase, beyond fund-raising, is very challenging and it's called apathy," Preston says.
"This is true across the county. We need more champions, more people who not only will give financially, but will take time and effort as mentors and coaches in order to make a difference."