Two Distinct Voices Resonating as One 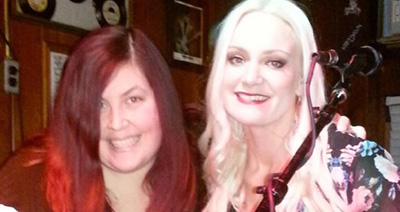 While the Great Lakes Bay Region is fortunate to have many talented female vocalists and accomplished, creative, musical artists performing regularly at clubs, bars, and festivals throughout the area, an alliance truly deserving closer attention is that of vocalist Melissa Curry and singer/songwriter/guitarist Michelle O’Neil.

Together their voices register with a solid unity to their harmony, shimmering with a resonance that both augments the power of their musical delivery, but also offers living proof to the notion that two voices do indeed speak louder as one.

Whether running through the crescendo of confessional exuberance of Sheryl Crow’s If It Makes You Happy, or milking the saloon-filled mirth of The Beatle’s Ballad of Rocky Raccoon, musically the magic of their musical alliance is born from the miracle of natural chemistry: the lanky long-haired soulful blonde guitarist and introspective songwriter on one end; the outgoing zeitgeist and exuberance of the big-hearted vocalist embracing the audience on the right – each acting as a bookend to the other that holds the entire architecture of their soaring vocal harmonization together.

But apart from all that, perhaps the best part of all to their story is its serendipitous origins.

The musical community that populates the Saginaw Bay has always harbored a tightly knit coterie of talented performers, and Melissa Curry commenced her own musical career by engaging within the camaraderie of that musical community, which instinctively tends to foster fresh talent.

She began by singing with Lila Rasa, a group co-founded by her friend Noel Howland, and later formed the group The Lovelies with Honesty Elliott, Chris Mohn, Oscar Gomez, and Mike Crampton. Subsequent to that she formed The Meltones with Mohn and bassist Mark Miller, and most recently joined up with Avenue Five for a short stretch of time.

Back when Avenue Five formed, Melissa and Chris Mohn were also performing as a duo and were appearing every Friday at White’s Bar. When they both decided to join Avenue Five, this Friday night slot at White’s opened up, which as fate would have it, Michelle O’Neil started filling.  But after Melissa decided to make her departure from Avenue Five, she suddenly found herself without a musical partner, until one night she came to catch one of Michelle’s performances at White’s and found herself harmonizing along with everything Michelle was singing.

Recalls O’Neil:  “I heard this voice singing along with me from the crowd and realized I had to talk with her, so on break told Melissa I had a date coming up at The Baywood Lounge in a couple days, and asked if she would like to wing it and come perform with me.  We never even practiced together; and I sent a list of songs over to her that we could both collaborate, and from that first moment we first shared a stage together it’s been magic. Hell, we still haven’t practiced together.  If we did we would have a lot more songs pulled together by now!”

As for Michelle’s origins, she grew up in Oakland County in the town of Waterford and says she started vocal lessons at the age of five. “My Mom enrolled me in classes that I pursued until the age of 12, which was important because it gave me operatic training and taught me to sing in different languages,” she explains. “From there I started singing in church and then branched out to coffee houses. A buddy that I grew up with that was a little older than me said that if we formed a group, we could start playing shows at bars, so at the age of 19 I started playing shows with him.”

“He really got me into this professionally and was like a big brother to me and from 2008 to 2010 we worked together in a band.” continues Michelle. “But then we had a huge fight because he was saying that I couldn’t do what I was doing without him and all that, so I said, ‘Screw it – I’m moving to Saginaw.’ I had a friend here and heard there was a relatively big scene up in this region, so when I first moved here I took shows anywhere that I could, even at rougher bars & venues, because I was fearless and had no idea about the lay of the land.”

When asked what the pair feels distinguishes their combined sound the most, Mel points to the similarity of their tonal range and vocal style. “We sound like one voice when we sing together,” she reflects, “yet it’s weird because even though we sound so much alike, individually we are so totally different – there’s like a yin and yang balance to it. I can’t tell our voices apart sometimes; and then all of a sudden I’ll hear a run and say, ‘Ah, that’s your part.”

As for assessing and deciding upon the type of songs and material to perform, Michelle says they both are open to the suggestions one will offer the other. “I like older Bluesy kinds of songs, but between the two of us we can cover every genre of music.  A lot of what we’ve added to our repertoire comes from audience requested songs that we look up on youtube and develop our own version from.  I also write a lot of original material, but oddly enough, we haven’t done any of those together yet.”

As for their performance schedule, Melissa Curry & Michelle O’Neill can be seen every Friday at White’s Bar from 5:00 pm – 9:00 PM and every other Thursday at The Log Cabin in Freeland, where they usually start around 8:00 PM. They also perform at venues such as SloBones in Frankenmuth and other venues around Michelle’s former home-base of Oakland county.  “We also performed this past New Year’s Eve down in Grand Rapids and I have a cottage up at Boyne, so would like to get our schedules together so we can branch out some more,” relates Mel.

Ultimately, however, the most rewarding component for both audiences and these two talented artists is the amount of fun they’ve been having together.   “When I first got to this area, I never connected with the audience much,” relates Michelle. “I would stare at the floor, or stare at my shoes, but Melissa brought me out of my shell and now I don’t look away anymore. Any performing art is very vulnerable, and I still get shy and scared and nervous every time, but she’s taught me how to connect more.”

Regarding the biggest challenge the two have encountered together, Michelle is both refreshingly, courageously, and bluntly candid. “The first year we played together I was pregnant, so that was somewhat of a challenge; but honestly, the hardest part was my alcoholism and going through rehab. That was really hard. Sometimes I’d get so pissed and throw things, but Mel stuck it out with me.  Honestly, I’ve never met anyone with a powerhouse voice that could sing with me as an equal, so I don’t feel like it’s competition. We appreciate each other and both get a big smile on our faces when we hit certain notes.”

“Now I only perform as a solo and duo with Mel and I like getting older,” concludes Michelle. “I like doing these early Happy Hour shows because it allows me to express myself and then head home to my family. I can’t believe that back when I was drinking I would sing all night and then get up to be with my kids at 6 am. That was so crazy, but I’m two years sober now and life is better than ever.”

As we wind down our interview, both of these talented females look at one another, and express how much they love each other, which is perhaps the most gratifying resonance of all behind the strength of their alliance.

“We’re not just singing partners, we genuinely love one another,” states Michelle.

And it is through that mutual love, carefully protective concern, and unmitigated talent that Mel & Michelle are able to construct one of the most compelling musical alliances imaginable – one that is guaranteed to lift your spirits to the highest registers imaginable.