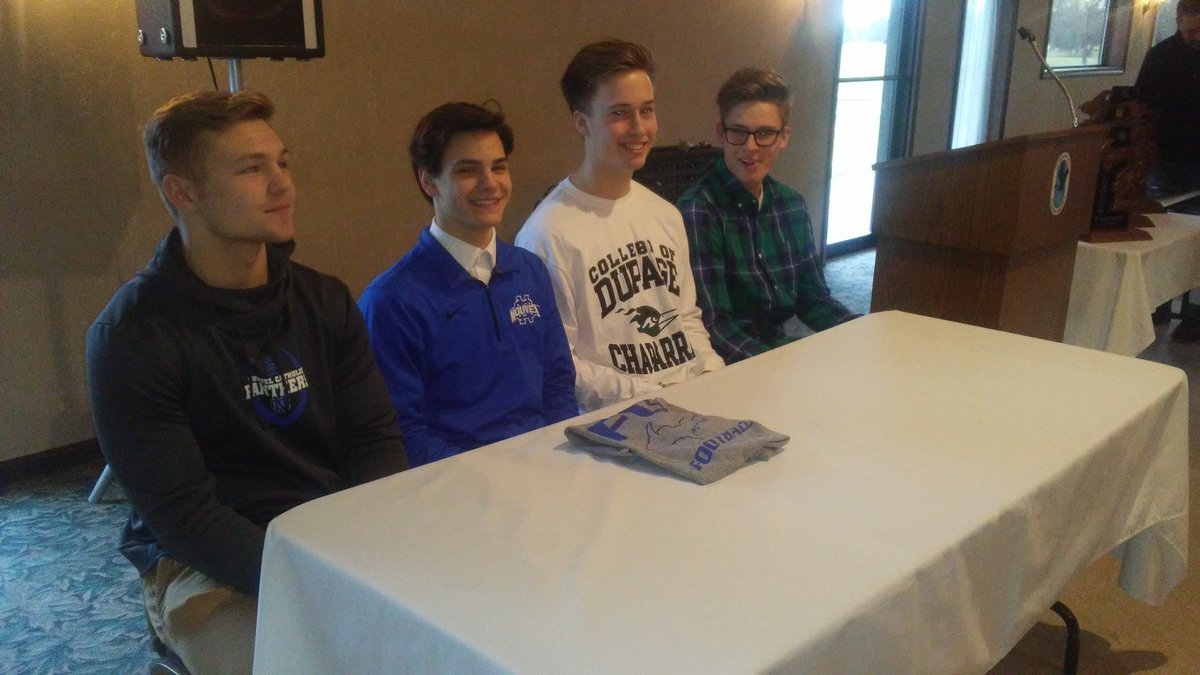 Four high school football players from the 2017-18 Nouvel CC football team have announced plans to continue their respective football careers at the next level in a ceremony held at Crooked Creek banquet hall on Thursday afternoon.
Senior Tate Hausbeck, a 2017 MHSAA first team Div-8 All State QB who gained 3,182 yards of offense, completing 156 of 270 passes for 2,512 passing yards, while adding 670-rushing yards on the ground, totaling 27-TD's. Hausbeck turned down an NCAA Div-II offer from Northwood University in order to attend NJCAA powerhouse College of DuPage in Glen Ellyn, IL. Located just outside of Chicago, DuPage is one of the top Junior College football programs in the country. Hausbeck will look to transfer to an NCAA Division I program within the next couple of years.
Linebacker Alex Wrobel, a 2017 MHSAA first team Div-8 All State defensive selection after leading the Panther defense with 160-tackles this past season. Wrobel announced he will be attending NAIA power house Siena Heights University in Adrian, MI competing in the Wolverine Hoosier Athletic Conference next year.
Peter Snyder, a 6-foot-3 WR/OLB who was named to the Detroit Free Press 2017 MHSAA Div-8 All State first team after leading all NCC receivers with 750 receiving yards on 32 catches to go along with 8-TD's. Snyder has talked to NCAA Div-III  Albion College, NAIA Siena Heights University, and NCAA Div-II Saginaw Valley State University, however, Snyder is still undecided on where he will be playing his college football next year.
NCC WR/OLB Kenny Kujawa was named to the Detroit Free Press 2017 MHSAA Div-8 All State second team as a linebacker. Kujawa had 42 catches for 680 receiving yards with 10-TD's as a WR on offense, while also leading the Panthers with 5-interceptions on defense. Kujawa announced he will be playing football at NCAA Div-III Finlandia University in Hancock, MI who will be joining the Michigan Intercollegiate Athletic Association conference starting in the 2018 football season.
Hausbeck, Wrobel, Snyder, and Kujawa helped lead Nouvel CC to a 13-1 record, culminating with a runner-up finish in the 2017-18 MHSAA Div-8 State Championship game at Ford Field in Detroit, MI this past November.
Nouvel comeback in final minutes for playoff win over Harbor Beach: