Sean Nowosatka had 4 goals, while Adam Rivette and Brendan Maly each had 2 goals apiece for FNV.... 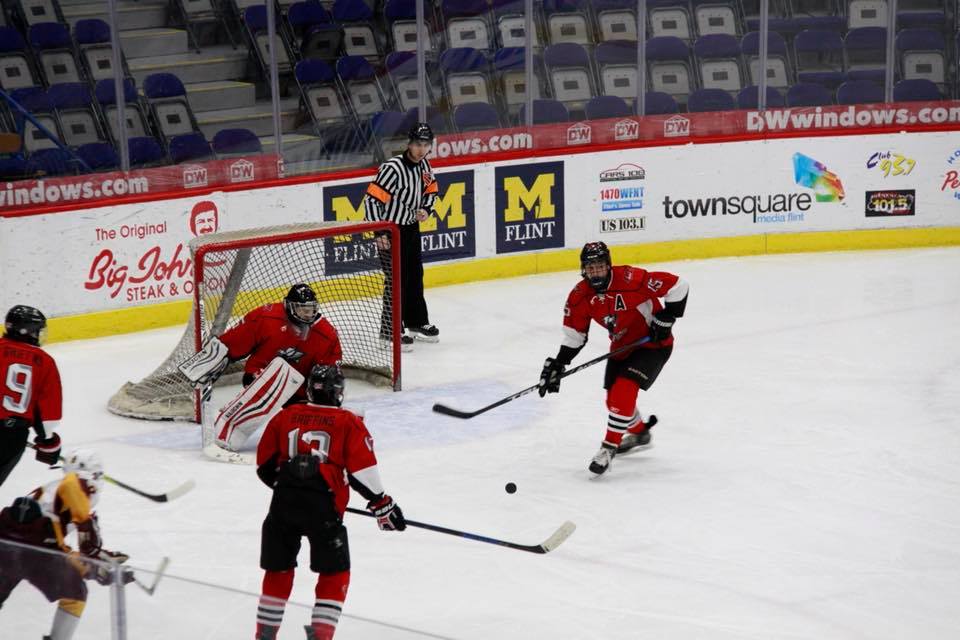 Hartland, MI:
The first place FNV Griffins (6-0 conference, 14-3 overall) won the “battle of the Griffins” skating to a decisive 8-2 victory over the Fenton/Linden Griffins (2-4 conference, 5-9 overall) in a Mid Michigan Hockey Conference matchup at Hartland Arena in Hartland, MI on Saturday night.
Fenton/Linden would strike first when sophomore Nate Ladd chipped the puck up and over the shoulder of FNV senior goal tender Ben Younglao to take a 1-0 lead at 4:32 of the first period. Fellow Fenton/Linden sophomore Heyden Justus assisted on the Ladd goal.
FNV tied the game when junior Adam Rivette (No. 3 scorer in the state of Michigan in all divisions) picked up a pass from senior Sean Nowosatka then fired a wrist shot over the right shoulder of Fenton/Linden goal tender Loren Jones at 6:50 of the first period, sending the two teams into the first intermission tied at 1-goal apiece.
Rivette followed up his first goal with an unassisted short-handed goal (his second goal of the night) to give FNV a 2-1 lead at 4:14 of the second period, before Nowosatka followed suit with an unassisted short-handed goal of his own to extend the lead to 3-1 at 6:19 of the second period.
FNV freshman goal-scoring sensation Brendan Maly scored a third straight short-handed goal for the Griffins, this one from Nowosatka to extend the lead to 4-1 at 7:29 of the second period.
Fenton/Linden junior Josh Appleberg managed to cut the FNV lead in half (4-2) with a goal from senior Cody Engberg at 10:08 of the second period, before Nowosatka scored his second goal of the night with assists coming from FNV defensemen Aidan West and Tanner Hare at 15:03 of the second period, taking a 5-2 lead into the second intermission.
Nowosatka earned a hat trick with another unassisted short-handed goal to extend the FNV lead to 6-2 at 4:02 of the third period.
Maly then cleaned up a rebound goal on a shot off the stick of senior Kenny Kujawa to give FNV a 7-2 lead at 12:31 of the third period, before Nowosatka completed the Texas hat trick with his fourth goal of the evening to round out the scoring (8-2) with an assist from West on the final goal.
Younglao earned the win in between the pipes for FNV, who will now prepare for a road contest against a (5-7) Flint United (Kearsley, Brandon, Holly, Lake Fenton) team for a 7 pm face off at the Dort Federal Event Center in downtown Flint, MI this Tuesday night.
Miscellaneous   Rock   Rap/Hip Hop   Country   Jazz   Blues