Federal Magistrate Hears Arguments in the Case of DEA vs. MICHIGAN DEPT. OF COMMUNITY HEALTH 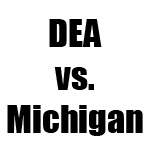 As reported in our last edition, The Federal Magistrate in Grand Rapids heard oral arguments on February 1st in the case of DEA v MDCH, whereby the Drug Enforcement Agency is seeking confidential records of registered Medical Marijuana patients from the Michigan Department of Community Health.

No decision was rendered, but it will be coming down in the near future.

According to Tim Beck, a self-declared Republican who was instrumental in successfully passing the first local medical marijuana law in Michigan, and current founder of SAFER Michigan and CPU (Caregivers & Patients United) of Michigan, “As a lay person observer, it seemed to me the DEA attorney (Asst. U.S. Attorney John Bruha) was very well prepared and put a lot of thought into his arguments. Our side did the best we could, on very short notice, having barely three days to prepare when word got out that Attorney General Bill Schuette agreed with the DEA position.”

“The Attorney appearing on behalf of Schuette took no part in the proceedings, unless he was asked a question or two by the Magistrate,” reports Beck. “His answers were very short and non-committal. He agreed that if MACC (Michigan Association of Compassion Club) were given standing, the Attorney General’s office would have no problem with that.”

“In essence, the DEA attorney emphasized that although Federal law was supreme, the real purpose for demanding these records was to be sure State Law was being followed. They seemed to want caregiver information to prove some kind of conspiracy theory,” he continues.

A core issue in this case is whether MACC as a ‘third party’ to the case should have standing to contest it. Because Schuette (representing the State and the Michigan Dept. of Community Health) is willing to turn over the information, provided the MDCH is granted immunity for violating confidentiality provisions of the Michigan Medical Marijuana Law, MACC has stepped in on behalf of patients and caregivers to prevent this violation of state law.

Kalamazoo attorney John Targowski fills in the details on arguments presented at this hearing. The issue is whether MACC as a third party has a ‘case or controversy’ before the court. MACC tried to intervene in the suit and essentially defend the position of the MDCH without actually being the MDCH. In order to intervene, they need to show ‘standing’.”

“There are several types of standing, but essentially it boils down to whether or not MACC can show they have an actual horse in this race, which is hard to do when the DEA doesn’t have to disclose which 7 people they are investigating.”

“There was a lot of discussion of the Fed. Vs. State issues involving the nature of the information itself, as well as the right of the federal government to compel its production,” he continues. “My feeling was that it’s more of an uphill battle in this case than of a similar case in Oregon where the DEA were stopped from subpoenaing their state records. I think we needed a more specific harm that merely the expected privacy of patients’ medical records and status.”

“I think the Feds assume the registered folks are legal patients, but want to know how many cards each has, when they were issued, whether it’s a plastic card or temporary, and believe they are doing the medical cannabis community a favor by doing this, as federal policy prohibits spending resources to take down those who are in “clear & unambiguous” compliance with the MMMA.”

“What is ‘clear & unambiguous’ compliance?  I’m sure the DEA would tell you that a compassion center operating on a patient-to-patient transfer method is not in such compliance with the MMMA and would be fair game. At this point, the only legal opinion justifying patient-to-patient transfers is out of Isabella County, concerning Compassionate Apothecary, and that decision is on appeal and not binding anywhere else, since it’s a trial court and not an appellate court.”

“People have to understand that the Michigan Medical Marijuana law is not as liberal as similar laws in California, Colorado, or even Rhode Island. So ‘clear & unambiguous’ compliance to the feds can vary depending on what home state we are talking about.”

“California’s laws explicitly authorize collectives and cooperatives, Rhode Island’s law explicitly allows patient-to-patient transfers so long as no money is involved, but Michigan’s MMMA currently does not have such language, so it will be harder to argue that compassion centers, cooperatives, or patient-to-patient transfers are clearly allowed by the MMMA, and therefore, we are more susceptible to federal raids here in Michigan.”