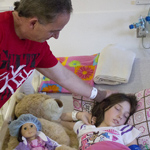 It was by sheer providence that Bay City businessman Brian Martindale came upon a local newspaper story back in September of 2012 telling the tale of Jessica Schwerin, a 10-year old who had been diagnosed with kidney failure and was in desperate need of transplant in order to live.

Two year earlier Martindale had wanted to help a friend of his suffering from an impaired kidney, only the match didn’t work out, so he kept a vigil eye buttressed by a growing desire to possibly save the life of someone in a similar situation and stayed on the donor’s list, until he came upon the story and photo in the Bay City Times of Jessica with her mother, Stacey Schwerin, standing on a street corner by the local Walmart with a sign stating a desperate plea to find a matching kidney donor to alleviate the prognosis of her suffering daughter.

As the owner of Karma Apparel, Martindale read the story, saw Jessica’s photo with her desperate mother, and placed a phone call to them that weekend.  “I told her who I was and that I wished to help Jessica by donating one of my kidneys, we went down to the University of Michigan to get tested and discovered that Jessica and I shared the same blood type, so we met in December of 2012 and on January 11, 2013, we both went through surgery together and Jessica received my kidney,” explains Martindale.

With the one-year anniversary of that surgery behind them, both Martindate and Jessica have been doing well ever since.  “It’s ironic that my business is named Karma Apparel,” smiles Martindale, “because the fact that things worked out for Jessica is definitely a case of the karma thing working out.’

Indeed, an indelibly close bond between the two has formed since their surgeries one year ago – so much so that Martindale asked Jessica to assist him in helping other needy individuals requiring kidney transplants find donors by helping him make a video, which the two completed last Fall.

“Over 90,000 people in the United States need kidney transplants,” states Martindale, “and many people do not realize that a majority of those transplants harvest kidneys that come from cadavers from people donating their organs after their life expires.”

“Even though many times these organs are not suitable for donation, 80% of the kidney donations still come from cadavers with only 20% coming from living donors,” continues Martindale. “I wanted to get the message out to people by letting living donors and recipients tell their own story, so we did a short video together urging people out there to also donate.  Many times all that is needed to secure a living donor is for individual to hear and see the actual story of other people that have gone through the experience.”

Today Jessica is a healthy, happy, and stable 12-year old that is deeply appreciative of the selfless gift that Brian Martindale gave her. “Even though I was only 10-years old, I knew that I had to have transplant surgery done,” reflects Jessica. “It wasn’t a painful surgery. They gave me medicine and put me to sleep and after the transplant it took me about 10 months to recover.  Since the surgery I feel better every day. I have more energy and am not so tired anymore.”

According to Jessica’s mother Stacey, the most challenging component throughout Jessica’s ordeal was the arduous task of finding a suitable donor. “It was frustrating not being able to give her my own kidney and not knowing what to do to find one,” she explains. “Dialysis scared the daylights out of me because of how debilitating and difficult it can be; but since the surgery a year ago, Jessica’s energy level has tripled. She’s still working on muscle tissues down there, but amazingly is into gymnastics now.”

One of the pivotal missions that Brian and Jessica wish to address are the misconceptions that people often harbor about kidney donations. “We are born with two kidneys and do have a spare,” states Martindale, “but oftentimes people hesitate about donating their spare out of fear they might need it in the future, which is understandable.”

“But people think their lifespan will shorten if they donate a kidney, which is absolutely untrue,” continues Martindale. “Fifty years of research and sixty years of kidney donations demonstrate that people healthy enough to donate usually live longer than the average person.  I had all my testing done at the U of M and they said I was healthy as a 25-year old. And while some are more blessed than others, stereotypes need to be changed.  I don’t notice any difference without my other kidney and only experienced one small complication because she got my kidney on a Friday and I went into my store on a Tuesday and got a hernia in the area of the incision because I overstrained myself.”

“Usually it takes 2-4 weeks off regular work to recover and you are not supposed to lift more than ten pounds for the first six weeks after surgery; but most people are able to go back to work after 2-3 weeks.  Within 72 hours all my pain was in control and within seven days my body was functioning normally again.”

According to Stacey, in order to donate a kidney a person must be between the ages of 18 and 65. “The matching process is important,” she notes, “because if you are an exceptionally large person for example, that size would not fit a little girl like Jessica.”

Additionally, if one does opt to donate a kidney, 100% of their medical care is covered whether they have insurance or not because the individual is donating one of their organs. “But a person does have to be capable of taking a few weeks off work, which can also be problematic,” notes Martindale. “I would like to see the laws changed so that donors didn’t have to worry about that.”

“There are many things people don’t know about kidney donation that we are trying to address,” continues Martindale. “This is the only cure right now for people suffering from kidney disease. It wears their bodies down. I had a friend that went through 8 years of dialysis and eventually suffered from renal failure and died, plus people in need of a kidney are prone to sickness. There are certain foods you cannot eat when you are on dialysis and you have to have it done three times a week, which takes all day and goes on until you receive a transplant.  The blood has to be cleaned three time per week and you can’t skip a treatment or else you will die.”

Since receiving Brian’s ‘gift’ Jessica says her outlook on life has decidedly changed. “I feel blessed,” she states humbly. And when asked what she wants to do when she grows up, she responds, “I’d like to be a doctor or a dancer. Maybe both.”

“The average wait for a kidney is five years for an adult, if your are lucky. Plus a patient’s life expectancy is from 20-years and upward if the kidney derives from a live donor.  If it comes from a cadaver, the lifespan is diminished to anywhere from five to seven years.”

“The impact you can carry on somebody’s life is tremendous.”

To find out more about kidney donation or to watch Jessica and Brian’s video go to shopkarmincapparel.com