Elizabeth Pitcairn & the Tale of Her Red Violin 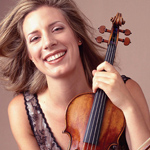 Violiin virtuoso Elizabeth Pitcairn is one of more significant soloists circulating in the world of classical music, distinguished not only by her talent but also the unique partnership that she shares with her 1720 Red ‘Mendelssohn’ Stradivarius violin, which inspired the award winning film The Red Violin.
As part of the Saginaw Bay Symphony Orchestra’s 75th landmark season, Pitcairn will be returning to the Temple Theatre stage on March 26th to grace audiences with collaborative performances with the orchestra on the Violin Concerto by Jean Sibelius. Additionally, the orchestra will be performing a work entitled blue cathedral by 2010 Pulitzer Prize-winning composer Jennifer Higdon, and Symphony No. 6 by Pyotr Ilyich Tchaikovsky.
Antonio Stradivari, who remains the most famous violinmaker of all time, crafted Pitcairn’s historic instrument in Cremona Italy. Not long after its creation, the instrument vanished from the radar screen, with nobody knowing where or to whom the violin belonged for more than 200 years, spawning many historians, writers, journalists, and critics, as well as Canadian filmmaker, Francois Girard, to speculate on the violin’s mysterious history.

The 1720 Stradivarius eventually surfaced in 1930s Berlin, where it had been purchased by an heir to the great composer, Felix Mendelssohn. Years later the violin was purchased by a New York industrialist who kept the instrument in impeccable condition. In 1990 the industrialist anonymously put the Red Violin on the auction block at Christie’s of London, which ignited a media frenzy of sorts, since both seller & buyer remained anonymous.

While some of the world’s most powerful sought to win the coveted instrument, it landed in the hands of a then 16-year old American violinist named Elizabeth Pitcairn, who is the first known musician to ever play it. She remained silent about owning the violin until her burgeoning solo career brought her into the public eye on international concert stages after nearly three decades of rigorous training by the world’s most esteemed violin teachers.

Back in 2006 I interviewed Pitcairn prior to her first performance with the SBSO from her home in San Diego about this unique marriage between artist & instrument, which she says was won in a bid at Chrstie’s auction house in London 20 years ago.
“It was a gift from my Grandfather,” she explains, “who was a great benefactor of the Arts and supported many composers and their works.”

Born into a musical family (her mother is a Juilliard trained cellist and Elizabeth, by the way, also has ‘perfect pitch’) Pitcairn started playing violin at age 3 and was only 16 years old when she first encountered the ‘Mendelssohn Red Violin’. She and her mother flew to London to visit the auction house, where Pitcairn was allowed to play the instrument for 20 minutes.

“It has the most beautiful sound and of all the violins Stradivarius made, is considered to be one of the finest examples of his work,” she notes when asked to distinguish it from other violins.
“It has attributes of a beautiful human being in terms of its qualities being in proportion and balanced. There is a glow about the sound and it has a voice, a personality, and its own essence. You can hear the perfect sound of it in the back of a concert hall as well as you can in the first seat. But mainly it was created to be played in a big concert hall. That’s where it really shows off. It was not created to be enshrined in a closet or on a shelf.”
“While she will not reveal exactly how much the winning bid for this precious instrument was, speculation places it well into the seven figure range. In the film The Red Violin the instrument makes its way through several owners over several centuries and countries, including 17th century Italy, an 18th century Austrian monastery, 19th century England, China during the Cultural Revolution, and modern Montreal, where a collector tries to establish the identity and secrets of the ‘red violin’.
In possession of it since Thanksgiving Day, 1990, I can’t help but ask if Elisabeth gets nervous traveling with her infamous Strad, or takes many precautions with it.
“Actually, it can fit in overhead luggage,” she laughs. “No one knows what I’m carrying on, but sometimes they ask. Once a guy joked to me, ‘Is that a Strad?’ And I just smiled and said, ‘Oh, yeah’ Of course, they don’t believe me.”
When asked if she recalls any favorite ‘stand-out’ performances, Pitcairn is reflective. “I don’t consider that question in terms of audience numbers or concert halls. To me a stand out performance is that rare occurrence where everything comes together, which hardly ever happens for an artist. But once in awhile, everything converges. When I truly feel in the zone, that’s what I consider a great performance. But its like children, none of them are favorites, really.”
Tickets to this event are available by calling 989-755-6471.