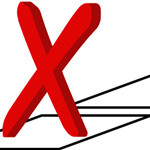 Saginaw County voters face an array of key decisions on Nov. 7. And indeed, all will make a lasting impact that could go well beyond the terms of office for the elected officials who are selected, or on the taxes levied.

Still, all are temporary. The most permanent choices relate to the five state ballot proposals, especially Proposal 2 to weaken affirmative action and Proposal 5 to guarantee inflation-adjusting state budget shares for education. These would amend the Michigan Constitution. Once language is placed in the Constitution, it's almost unprecedented to see those words removed.

So consider that regardless of whether Democrat Jennifer Granholm remains as Governor or Dick DeVos ousts her, their respective views on affirmative action will matter a whole lot less if Prop 2 passes.

We also know that Granholm & DeVos would offer sharply different budget plans both for spending and taxation. But if voters approve Prop 5 to protect K-12 and college funding in a 'lock box' - to borrow an old Social Security campaign term - either choice for guv would have a lot less say-so in charting the state's future priorities.

In summary, this all adds up to assert that informed voters must decide far more than whether they believe whether Granholm pushed Michigan's economy deeper or kept it afloat, or whether DeVos through Amway created jobs in-state or shipped them to China.

An informed voter must see a bigger picture to go beyond the governor's race into other elections, into the judiciary and yes, even into those ballot propositions.

Similar themes are expressed in the Granholm -DeVos race and the U.S. Senate campaign pitting Democratic incumbent Debbie Stabenow against Republican challenger Mike Bouchard. The cornerstone issue is the economy. Nobody denies that Michigan is worse off than virtually any other state. Granholm & Stabenow point to flawed national policies under President Bush and a Republican Congress. DeVos and Bouchard point to high state taxes and bureaucracy.

Republicans now control the state Senate 22-16 and the House 58-49 (with three seats vacant). Political analysts say the Democrats' best chance to forge a turnover is in the Senate. House map of districts will increasingly favor Republicans because flight from urban areas continues. Remember when Jim O'Neill's long held 95th District consisted only of the City of Saginaw? Now it also includes BV, Bridgeport, and Spaulding townships.

For Circuit Court judge, voters may choose two of three candidates. Elected incumbent Lynda Healthscott and appointed incumbent Darnell Jackson - previously elected as a District Court judge - face Jim Howell, the former Republican state rep prior to Kahn. Each candidate is running a separate campaign, although red signs for Heathscott and Jackson are grouped more often, while blue signs for Howell more typically are placed by themselves. Jackson & Howell, both with past police experience, aired their views in a Review Oct. 5th forum. Heathscott did not respond.

None of the county board races involves big money and Democrats appear poised to keep their majority on the 15-member panel.

County leaders in August lost an all-or-nothing 1.6 mill pitch for a 'no boundaries police' tax that would have added up to 70 personnel. They opted not to give voters the separate choice of simply renewing 0.3394 mill. This time they aren't gambling. Voters may support either or both of two options: 1) Renew that 0.3394 mill, and/or 2) Support 0.5394 mill, which would include the renewal and an 0.2 mill increase. Sheriff Charles Brown says that without the higher millage, inflationary costs would force him to eliminate 14 deputy positions. For analysis of the five ballot proposals, refer to our last edition, which is online at www.review-mag.com. An excellent neutral web site for the quintet of state proposals is the neutral Citizens Research Council at www.election.crcmich.org.

For the more obscure state courts, university boards, and the K-12 school board, we would commend the Michigan League of Women Voters non-partisan election guide via www.lwvmi.org.

To do your sister and fellow voters a favor, go to the polls prepared so that you may mark your ballot in a timely and expeditious manner.