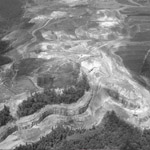 The elections finally are over and finished, but a new campaign is underway across Michigan.

Environmental activists are aiming to block construction of eight new coal-fired power plants, including one in Bay County and another in Midland.

Leaders of the energy and business communities say the plants are needed to meet increased demand for power, and that "clean coal" technology will sharply reduce emissions, compared to Michigan's 19 existing coal plants.

Opponents of the eight new plants respond that demand actually is trending downward, but regardless, coal is not the way to go.

"There is no such thing as clean coal," insists Tiffany Hartung, an organizer for the Sierra Club's Michigan chapter.

Representatives of Consumers Energy and DTE Energy (Detroit Edison) respond that new coal-burning technology is more than 90 percent cleaner than during the early 1970s, when the federal Environmental Protection Act was made law.

Pollutants include carbon dioxide, smog, soot and mercury. Consequences are heart and lung problems, especially asthma. Mercury enters the water supply and then the human body when people eat the fish.

Debate goes back and forth like a ping-pong game:

Hartung spoke last week to a gathering sponsored by the League of Women Voters of Saginaw County. Her teammate in the presentation was Lynn Derck of

Quanicassee, a volunteer with Citizens Exploring Clean Energy. Previous presentations were in Bay City and Midland.

Action will continue with a visit from Elisa Young, an activist from Meigs County, Ohio. Young will discuss coal plant pollution, along with the practice of mountaintop blasting in the Appalachian Mountains as opposed to strip mining. The first session is at 6:30 p.m. Sunday, Nov. 9, at Unity Church of Bay City, 3736 State Street. The second meeting is at 7 p.m. Monday, Nov. 10, at Midland Unitarian Universalist Church, 6220 Jefferson Avenue.

Consumers Energy wants to expand the Karn-Weadock plant at the mouth of the Saginaw River in Hampton Township (Essexville). A pair of far smaller operators, LS Power and Dynegy, has formed Mid-Michigan Energy for a Midland facility on South Saginaw Road at Waldo Avenue.

Supporters of building the plants are united in the Michigan Jobs and Energy Coalition.

What Do the "Green Folks" Want?

Organizers are petitioning Gov. Jennifer Granholm to block the eight coal-fired plants through an executive order that would limit carbon dioxide emissions, also known as greenhouse gases. They started the petitions in April and delivered their first batch of 27,000 signatures in September, with more to come.

There is no immediate deadline. Hartung and Derck say they expect political debate to extend well into 2009, with various discussions not only in the state Legislature, but also in hearings conducted by the Michigan Public Service Commission.

Granholm and a majority of state legislators basically have taken the middle of the road. For example, a bill that Granholm signed in October directs Consumers Energy and Detroit Edison to increase renewable sources such as wind and solar to 10 percent of their total production by the year 2015.

Use of renewable sources now is about 4 percent. (For those who wish to keep up with "environment speak," these ratios are known as Renewable Portfolio Standards and Michigan is the 28th state to take this step.)

In addition to the petitions, Tiffany Hartung and Lynn Derck say concerned citizens should call or write Granholm and state lawmakers. This may seem fruitless, but Derck asserts, "Legislators have told me that all it takes is about a half-dozen phone calls, and then they realize they have an issue on their hands."

Developers of the proposed coal-fired plants say they can send the carbon dioxide deep into the ground, rather than into the atmosphere, through use of old oil wells and other methods. Critics say the methods are unproven, and that the capacity for the necessary 40 to 50 years of storage is doubtful.

Future Electricity Use: Up or Down?

A cornerstone of the coal-fired energy debate is whether use of electricity will rise, fall or stay the same.  Both sides have their sources. Numbers are within a 2 percent range, but they make all the difference.

Environmental activists will lose leverage in their anti-coal fight if use rises during the next few years, because 60 percent of Michigan's electricity comes from coal. Therefore, activists are continuing their push for public education so that more people will buy low-watt bulbs, improve insulation and so forth. The key is to reduce use.

Some utility executives say electricity use will rise because more and more people are plugged into home items such as personal computers, big-screen televisions, and rechargeable cell phones and iPods.

Environmentalists answer that the state's population is shrinking, and that more people are learning to conserve because of economic hardship.

If utilities give more priority to wind and solar and geothermal, instead of coal, they will have a better chance of reaching or exceeding the 10 percent Renewable Portfolio Standard by 2015.

Longtime activist Peter Sinclair argues that other states have stricter standards, such as California with 20 percent by 2010 and New York with 25 percent by 2013.

Coal Comes from the Mountaintop

The Sierra Club's Tiffany Hartung offers a reason to oppose coal-fired plants that goes beyond conditions in Michigan. She points to the rising practice of mountaintop blasting in the Appalachian coalfields.

Starting in the 1970s, coal producers started to realize that they could cut costs through an alternative to strip mining. They would need far fewer employees if they chose to blast the tops off of mountains, following up with heavy equipment to dig out the coal.

To do this, Appalachia's native hardwood forests must be cleared. Blasting removes up to 1,000 feet of mountaintop. Waste is dumped into the valleys below, often burying streams. Nearby families, and sometimes entire small communities have contended with flood. Air and water both are polluted.

"The coal we use is imported into Michigan, and so we do not see this directly," Hartung says, "but we should consider the methods that are used."

Sobering Thoughts Regarding the 'Other Green'

The coat boom currently sweeping America is the atmospheric equivalent of a swan dive off a very tall building. Scientists have reached consensus that we need to cut climate-warming pollution, yet the electric-power industry is racing to build more than 150 new coal plants across the United States, including these in Michigan.

Without doubt, coal is by far the dirtiest fossil fuel. If new plants are built they will dump hundreds of millions of tons of carbon dioxide into the atmosphere each year for decades to come.

As with most stories about energy, corruption and greed, coal is the 'new green'. Power companies can make upward of twenty dollars per megawatt hour by burning coal, which produces electricity far more cheaply than natural gas. Hefty profits from coal plants are the reason why TXU out of Texas, for example, who plans to build 11 new plants in that State by 2011, earned a net income in the third quarter of 2006 that was more than $1 billion.

But coal is only profitable to the companies that build the plants because all of the onerous related costs – stripped mountains, increases in asthma and heart attacks, neurological damage from toxic mercury – are all offloaded onto the shoulders of the American pubic.

Because Congress is widely expected to crack down on global warming by placing limits on carbon-dioxide emissions, coat will become less profitable. This is why companies are rushing now to build new plants under the regulatory wire.

In 2001 the energy task force headed by Vice President Dick Cheney used the threat of blackouts to justify a call for up to 1,900 new coal-fired power plants.

But utilizing this old-fashioned form of energy to meet rising power needs is a 19th Century solution to a 21st century problem.

(NOTES: The website for signing the Granholm petition is www.michigancleanenergynow.com.  An account of mountaintop blasting is "Coal River" by Michael Shnayerson.)