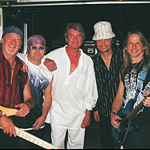 My editor picked on me for a closet collection of CD's that he deems hardly worth hearing. Oh yea, we've all got em'. Fortunately I don't have to disclaim any Barry Manilow or Abba.  Sans these artists in my well over three thousand CD library, I thought myself immune from the scrutiny of the Embarrassment Nazi's.

So imagine my surprise to find that it was my collection of Deep Purple material that got me jibed.

At this, I was a little perplexed.

The Editor was cool though: he tossed me a bone. He said "You know, I love the Stones, and people pick on me because they see them as little more than a glorified bar band".

Ouch. To any Deep Purple fan, the comparison is painful.

Look, if it means any thing to anyone, I still feel justified in my love of the band. Their arrangements are complex, their choice of chord structures progressive, and their use of a Hammond organ, despite my absolute disdain for the instrument, is actually damned cool.

So what's up with this Editor guy anyway? He admits his only familiarity with their material based on the three commercial cuts he's stumbled on in his many years covering the music scene: "Hush". "My Woman From Tokyo". "Smoke On the Water".

Man I hated "Smoke on the Water".

Again, he's tossing me a bone. In self defense, I sent him a cut of "Ted the Mechanic" from the Perpendicular album. His response was "I like it! Good Biker Music".

My love for DP happened innocently enough, and through cuts which were recorded long after the band's big commercial successes.

Actually, it was the title track of an album I heard in the summer of 1985 that got my attention.

I had just stepped off the plane on my return from a summer in Germany with my sister when, as a gift, my younger brother gave me a copy of Perfect Strangers.  Drawn in by Richie Blackmore's signature dark bends and off the chart power chording, I gave full time and attention to the whole album, and I was hooked. My friends were listening to Van Halen and Motley Crue. For that summer of 1985, I was locked into Deep Purple.

I saw the group several times, many years later, escorting my radio listeners to various venues to see the band. Though my ability to be enamored with the concerts and back stage meet and greets had long since faded, I was struck by the fact that Deep Purple was its own entity. They were consummate professionals, and their performances always proved superior to the bands they toured with.

By then, Blackmore was long gone, replaced by one of my favorite guitarists, as it happens. I was also a Dixie Dregs fan, so Steve Morse, a technical master, was a great addition to the group in my mind.

Folks only familiar with Deep Purple's commercial successes may have a legitimate argument against my love of their material. They might like the handful of aforementioned commercial songs, but they have a harder time understanding the attraction. Fans of the band, however, know exactly what I'm talking about.

I am a fan of Deep Purple because they have an original approach to their sound. Though distinguishing Ian Gillan's signature vocals is never difficult, and the Hammond Organ is always prevalent, they manage to switch directions in every song. They do it in way that throws a curve ball into traditional rock/blues progressions.

It's not exactly surprising that Deep Purple managed to retain a following, nor that they continue to sell out shows around the world after nearly forty years as a band. They made significant member changes regularlyŠsomething that would normally kill a less determined group.

It was a revolving door: Blackmore is in. Blackmore is out. Gillan is in. Gillan is out. Even the most die hard fans can't keep the story straight. But the end result seems to have been a regular infusion of fresh ideas and direction, which, forty years and well over a hundred million record sales later, continues to pull in fans around the world.

For the record, the band was originally to be called "Roundabout". It might have been a name that suited them better.

DP was formed by a musician with business contacts that could finance the group in 1967 England. They began as little more than a couple of session guys working on a formula to hit the big time. Though the drummer who originally formed the group, "The Searchers" Chris Curtis, soon dropped out, the project managed to recruit session guitarist Richie Blackmore and keyboardist John Lord.

When Curtis vamoosed, the business entity, which financed them, as well as Blackmore and Lord, were determined to continue. Bassist Nick Simper and vocalist Rod Evans would join the effort, with Ian Paice replacing the now defunct drummer who originally set the wheels in motion.

The detours and pitfalls of member changes would soon become a harbinger. Decades later, fans would argue over exactly what "formula" gave the band its ongoing momentum: Was it the continuous member changes, or the focus on musical exploration without regard to keeping popular appeal?

By 1968, the band had a name, suggested by Blackmore, who referenced his grandmother's favorite song: Peter DeRoses' "Deep Purple". By the end of that year, the group would release its first album "Shades of Deep Purple". It would summarily flop in the UK, and explode in the US.

With a cover tune (Joe South's "Hush") as their first big commercial success, they were soon booked with the band "Cream" on the "Goodbye" Tour. They weren't to last long, however, as they were abruptly dropped from the tour for what is widely argued as "showing up the lead act". After releasing "Book of the Taliesyn" and a self titled album, the band toured extensively in support of their effort.

At the close of the "Deep Purple" tour, the "Mark 2" lineup, as it has been coined, thus began. Evans and Simper were canned, and replaced by vocalist Ian Gillan and bassist Roger Glover, both from the band "Episode Six".

Fast forward many years and many incarnations, and you get a confusing and complicated picture of what makes a band like Deep Purple live on. Ongoing internal tensions and the destructive cocktail of addiction, exhaustion, and ego led to a dizzying coming and going of members.

Gillan quit following a tour of Japan, and Glover was shown the door with him. Singer David Coverdale and bassist Glenn Hughes would step in. The creative result, in Blackmore's opinion, was an altogether too funky lean in the 1974 album "Stormbringer". He would exit in 1975 to join Ronnie James Dio in forming the band "Rainbow".

When guitarist Tommy Bolin filled the gap, it would mark the beginning of the end for Deep Purple. Bolin would prove hopelessly addicted to drugs, resulting in poorly executed live performances and cancelled shows: death to a band so heavily focused on pressing the flesh.

In 1976, Coverdale would submit his allegedly emotional resignation. It seemed there was no band to resign from. At the close of the March tour, as founding members Lord and Paice had already made the decision that Deep Purple was to be no more.

While most of its former members did well with their various external projects, the initial thrust of what was considered the foundation of progressive and hard rock, it appeared, had burned out.

Despite the best efforts of promoters and the public in general, the band was resistant to regrouping to capitalize on the new rock revolution. Ongoing tensions, largely revolving around a massive clash of egos between Blackmore and Gillan led the band would call it quits for many years. Following a short Mid-80's reunion, wherein Perfect Strangers was released, Blackmore would never play with the band again.

Over the years, they've been tagged "progressive" "underground" and "hard rock". But to me, they are simply a very cool evolutionary platform for some very cool musicians who have proven that one vision can be shared by many.

Deep Purple has been playing to sold out crowds world wide and nearly non-stop for the past 10 years. In a recent interview I did with Steve Morse, I was struck not just by his love of the material, but his deep appreciation for the fact that crowds still dug what the band did, and accepted its new material whole heartedlyŠno matter which direction it took. "Man" he says, "A band that can do that can't be called great Šit's more like damned lucky".

I was impressed by the fact that I have never interviewed a member of the band who hasn't stayed on after we were off the air and chit chatted for a long while. To me, that is a clear example of someone who loves the music enough to still feel passion and drive to create.

Yes, even after nearly forty years.

Though egos may have caused discord in the group from in interpersonal standpoint, its members, past and present, have all contributed patchwork to a fabric that has had a lasting impact on the rock and roll scene. Despite their schizophrenic history or maybe because of it, they have reinvented themselves in ways that no other band can claim.

So..yeahŠ.maybe I have taken a little flack for my love of DP. That's fine, I can dig it.

There are millions of people around the world who dig on the same vibe, and they manage to live through the occasional snide comment from their Elvis Costello lovin' buddies, too.

They are the people who know there is more to Deep Purple than Smoke on the Water and My Woman From Tokyo.

When the band comes to town for the Mountain Rock Music Festival in Farwell on July 19-22nd I'll be there hangin' with themŠand so will my editor.

I have already bet a buck that he'd be rocking out to Ted The Mechanic despite the fact that there is not a biker bone in his body.