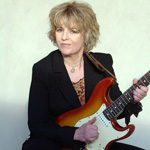 From Albert Collin's sideman to the master list of female blues guitar giants, Debbie Davies has covered all the ground there is in blues music.

Launching a career that has been well-coveted, as well as a musician status of high reputation, Davies never rests on her laurels.

As she readies a new release, due fall 2007, Davies has put together another tour to keep her wheels greased for the time being, as she makes her way to the State Theatre in Bay City for the Saginaw Bay Area Blues Society's Cabin Fever Blues Fest’ 2007 membership drive and concert, along with Janiva Magness and The Blues Creators from Saginaw.

"We're just in between (tours)," Davies said from her home in Connecticut two weeks ago on a rare day off. "We're leaving Tuesday for a big cross-country road trip."

Having Magness perform as part of her set, Davies band is center stage all night long for a few specific shows on this tour.
"Janiva and I have been friends for a long time," said the guitarist. "It's just really fun to get on stage and play music with people that you love and care about. One of the reasons for me that I started playing, besides the love of music, is the love of playing music with other people. Janiva and I go back maybe 20 years or something."

Davies and Magness have spent time together performing in the past.

"We actually did a tour with a band that opened for Jimmy Buffett for three months. It was called Fingers Taylor and the Ladyfingers Revue. She was the lead singer and I was the lead guitar player. If your readers are interested, there's a clip up on YouTube of Janiva and I performing. It was a long time ago and it might be fun for people to look at. I've been putting up what I call ‘retro-clips’, just clips of stuff that I've found around the house that go way back and people have been telling me they love lookin’ at 'em."

As for Davies new CD, she is looking forward to the release, as she may be playing some of the songs off from it on this current tour.

"I've got kinda one of those blues party albums going on where you bring in some guests and stuff," she mused. "I've got Charlie Musselwhite, Coco Montoya, and Tab Benoit as the guests. And I'm using Ronnie Earl's old rhythm section, Per Hanson and Rod Cary as the back-up people and (it's) just really fun. It's all done. The record label has to do their thing. They have to do the artwork and they do whatever else they do—that's what I'm waiting on."

Davies catalog goes back 20 some years.

"I've got quite a bit (of songs to choose)," she said. "The problem with that is sometimes people will request a song and it’s one I haven’t done in a while and I don't feel confident doin' it cause it's like a year or more's gone by. My problem is sometimes I can't remember all the words, even if I wrote the song. I know that sounds really dumb, but sometimes that happens to me. But other than that we try to keep our whole repertoire going. Naturally we're going to do stuff off the more current CD's. We're still doing stuff off the CD that we most recently put out, All I Found. I've got tunes that I've been leaning on for quite a while."

In the future, Davies hopes to do an album with Magness, but the cards haven't worked yet for either artist.

"We've definitely talked about it. It just hasn't worked out yet, because the record labels always have strong ideas about what they want you to do and we each have separate labels and separate management and all that stuff. So when things come together there's a lot of things that have to come together at once and we’re definitely have plans to do it for sure."

Having been relentlessly nominated throughout the years for the W.C. Handy Blues Awards, Davies was on hand to see Magness win one in 2006.

"Janiva picked the Handy up last year," said Davies. "We were both nominated and I received the Handy in 1997 actually, but I've been nominated like eight times."

With her blues status reaching the legendary mark, Davies is always continuing to find new ways to grow and inspire herself to keep performing.

"I consider the biggest job at this point in my career is keeping myself inspired and basically it's the music itself," she said. "I just love it. I grew up around music and both my folks both played music and it's like an addiction, I really need it in my life. I have to do it. And I'm just in love with playing guitar and I do feel like I'm still growing as a musician. And as long as that's happening and I'm still loving it, I'm going to keep trying to stay out there. It's definitely not an easy game to stay in, but it's the love of the music and for me especially the guitar. I've had to come to accept it, because sometimes it is really hard but you just realize it's worth it."

On top of the new album, Davies hopes to continue teaching this year which is new to her.

"What I want to do is to continue to make music with the people I have a kinship with. That's really important to me and I'm starting to do a few things, like some teaching and some music in the school's and things like that when I'm not on the road too heavily. It sort of feels like giving back to younger people and I'm gonna keep doing that too."

Planning to cover extra ground later this year, Davies looks forward to her trip to the State Theatre and seeing new friends and old fans the same.

"We just kind of keep on keepin' on at this point in time, but every time a new record comes out you do kind of hit the road a little harder. You've got a lot more work in conjunction with a release. We look forward to that."