Composition for the Future: Maestro Brett Mitchell Builds Upon the 75 Year Legacy of the Saginaw Bay Symphony Orchestra 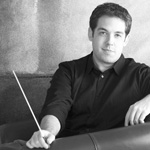 “Simplicity is the final achievement. After one has played a vast quantity of notes and more notes, it is simplicity that emerges as the crowning reward of art.”

“Neither a lofty degree of intelligence nor imagination nor both together go to the making of genius. Love – that is the soul of genius.”

As the Saginaw Bay Symphony Orchestra celebrates its 75th Anniversary with their 2010-2011 season, I am sitting at the Red Eye Caffe’ sharing a cup of coffee on a sunny summer morning with new musical director & symphony conductor Brett Mitchell.

Since 1935, the SBSO has served as a cultural fulcrum for the Great Lakes Bay Region, bringing divergent segments of the population together to experience the depth & richness of classical music, and Mitchell is keenly aware of the responsibilities that now reside squarely upon his young shoulders to pick up the baton that was held by such luminaries as former Maestros Patrick Flynn and Leo Najar; and lead the orchestra, as well as the community, into contemporary terrain that is equally adventurous and engaging, yet mindful of the orchestra’s storied past.

For the opening season performance on September 18th, Mitchell has constructed a trilogy of compositions drawn from different eras that share a spectral brilliance: Symphony No. 35 by Mozart, Symphony No. 1 by Gustav Mahler, and Millennium Canons by Kevin Puts, a 37-year old Alma native, who has been hailed as one of the best composers of our time.

“I wanted to make a statement with this first concert, not just with the spectacular nature of the Mahler, but with the diversity of great music our audience will experience in one special evening at The Temple Theatre,” notes Mitchell.

A native of Seattle, Mitchell is getting to know the lay of the land here in Saginaw, and once senses that he is equally comfortable mingling with the bohemia of Hamilton Street, as he would be addressing a university audience on the nuances of Italian opera.

In addition to commencing his first season with the SBSO, Mitchell is entering his 4th season as Assistant Conductor of The Houston Symphony, where he has led the orchestra in nearly 100 performances, several of which have been broadcast nationwide. He also serves as a regular cover conductor for the Philadelphia Orchestra and in recent seasons has led the London Philharmonic Orchestra in the Royal Albert Hall, along with serving as a musical assistant at the New York Philharmonic during the 2007-2008 season.
He made his European debut in 2004 with Romania’s Brasov Philharmonic and served as Assistant Conductor of the Orchestra National de France from 2006-2009.

Given this first seasonal concert as a new conductor of an orchestra celebrating its 75th benchmark year, a trinity of factors is at play. So how did Mitchell formulate the musical structure for what he wanted to present for this 1st concert of the Saginaw Bay Orchestra’s landmark season?

“I really wanted to do something with this 1st concert that was a little unexpected, along with something that would absolutely grab the audience,” states Mitchell. “Maybe it’s a dated expression, but I wanted to put something together that would really knock their socks off and make people say, ‘My god, I had no idea our orchestra could do this!’ That’s where the Mahler comes in.”

“People often think of Mahler as being sophisticated, but so is jazz. If you listen and take the individual components, it’s a combination of folk songs, Klezmer music, and military marches that are woven together in a manner that makes it sound sophisticated, yet it isn’t difficult to grasp.”

“The other thing I wanted to do was Mozart, which is different in scale and scope from the Mahler, and more refined and classical, in order to showcase the dynamics of the orchestra,” he continues.

“And finally I wanted to showcase the work of Kevin Puts, as I’ve done a lot of his pieces over the years and it’s perfect that he happens to hail from Alma, as I feel it important to showcase things written by Michigan composers and artists. It’s the perfect celebratory piece to open with.”

When asked about original compositions that he has authored, Mitchell laughs and jokes, “If we address that topic perhaps we should be drinking a beer instead of coffee!  But seriously, my Undergraduate Degree at Western Washington University was in composition, and then I obtained my Masters & Doctorate degrees in Orchestra conducting from the University of Texas. I haven’t composed anything for public consumption in quite some time, because unless you are Leonard Bernstein, there is not enough time in the day to study piano, serve as a worthwhile conductor, and also compose original music. I wish I didn’t have to sleep, but I do, so eventually I decided to focus upon conducting.”

Considering that Mitchell is responsible for conducting in the neighborhood of 60 to 70 performances a year, his point is well taken; which leads one to ask if any of the hundreds of performances that he already has under his belt stand out in his mind as career highpoints that helped inform his sensibilities about music.

“That’s a good question and it’s nice that it coincides with this first season opening, because the performance that stands out in my mind is the first time I did Mahler,” reflects Mitchell. “It was in April, 2006 when I was a Professor at Northern Illinois University outside of Chicago; and one of the reasons I wanted to take that job is because I believe so strongly in education.”

“The first time I did Mahler I spent a month preparing for it and really got my hands dirty with it. What I enjoyed during the performance was realizing that it was 54-minutes long – a big piece – and when you’re 26 years old, that’s a lot to handle.  It was a real watershed for me because I realized that if I could pull it off, then anything was possible.”

When asked what led to his initial interest in music, Mitchell points to back when he was around 4-years of age, with his Mother getting ready for work one morning.

“This song came on the radio that was totally beautiful and that completely captivated me,” relates Mitchell, “and I asked my Mom if we had a record of this song that was playing. She said, ‘Absolutely’, so I insisted that we take my Fischer Price record player over to my caretaker’s house so that I could play her that song, which happened to be a number one hit for about 3-months at the time.”

“Cutting to the chase, I basically insisted that my Mom not go into work but go over to my caretaker’s house with my record player and this particular song so all three of us could sit and listen to it.  The composer of this song was Barry Manilow and the song was Mandy,” smiles Mitchell. “But essentially, that’s what I still do today – find music I like and then share it with as many people as I can; which is also why I became a conductor – to become a sharer of music.”

Apart from Manilow are there other artists that informed or inspired Mitchell?

“Well, I came to classical music rather late in life, when I was attending college,” he continues. “I grew up with Pop music and my biggest early influences were artists like Paul Simon, as I don’t think you’ll find a better singer/songwriter. Classical music was always around in high school, but I was playing a lot of jazz back then and was a pianist in a jazz trio. At the height of our career we played every weekend, which is what I did for a long time.  But through musical history in school, I obtained more constant exposure to classical music and started conducting as early as high school.  By the time I hit college it started in earnest.”

“I also grew up with a lot of musical theatre,” he continues. “My grandparents were in their 30s and 40s when Broadway was at its heyday, and I would stay in southern Oregon with them, where they had this great community theatre that produced two musicals every summer. I was exposed to The Music Man, Annie Get Your Gun, Paint Your Wagon and then explored My Fair Lady, West Side Story, these really great musicals that influenced me a lot. That’s one of the reasons I have such an eclectic taste. I love to listen to pop radio just like everybody else.”

As to his views on what the role of a Director should be, Mitchell feels it important to answer in the affirmative. “A music director of an orchestra should be a galvanizing force, not just for the orchestra, but for the entire arts community.  That will manifest itself somewhat this season, and definitely next season in terms of collaborative projects we’ll do with other local arts organizations, whether it’s with a theatre company or a dance company.”
“I really think the message the music director can send to an entire city is that all arts are accessible.  People should be able to come to the Temple Theatre and experience not just great symphonic music, but great dance, great theatre, great visual art. If a music director does his or her job well those values will become instilled within a community, so the community feels welcome.  My role is to become a nexus for the arts.”
Brett Mitchell is also excited about the City of Saginaw.

Apart from music, Mitchell says that he likes to read a lot and ride his bike, something that is “difficult to do in Houston during the summertime when its 90 degrees at 5 AM.”

“I’m just very excited to be here in Saginaw,” concludes Mitchell. “I’d been looking at this job for almost two years and came here six months ago for the first time. Now I’m happy to be here and to get going. I’ve got this job, the season is planned, so I want to get on with it.”


“It’s like that transition period between presidents. You elect someone and there is this 10-month waiting period, so I’m geared for our first rehearsal in September and for the season to start. For me that’s when it all kicks in. The main event is always the performance and I’m excited to actually get to the concert!”