CD\'s in Review: Thick as Thieves - Any One Of Us 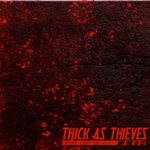 In today's climate of Electronic Dance Music and pre-recorded beats, loops, and digital delirium, the music of Thick as Thieves hits you like a warm breeze of humanity on a hazy summer day; or better yet, the warm sound of a diamond needle touching the grooves on a carefully tended vinyl record.
Never ones to court fashion as much as they are focused upon defining it, Thick as Thieves have gained the respect of audiences throughout the state because of their carefully constructed musicianship and the panoply of genre bending styles which they incorporate into their sound. Indeed, as a group unit, almost every form of popular music in the past 50 years is represented throughout sound - from the smoky, soulful textures of Philadelphia style R&B to the elliptical  textures of xylophone laden jazz, following a contemporary trail up the bumping road of Hip Hop, this is a group with a mission.
And on their new CD release of original material entitled Any One Of Us, the band covers the entire spectrum of musical texture and theme with a varied catalog of bluesy ballads and dance floor burners composed by vocalist & guitarist Kyle Mayer, which he says took 10 years of his life to produce and get right; and at 75-minutes, is an earful of engaging cutting edge creativity and improvisation that will easily lead you to repeated listening of this impressive outing.
The 7-piece band consists of Mayer, MC/Songwriter Jacinto; guitarist Kedree Young; Beni Schlatter on vibes; Marc Dixon on drums; with Roberto Garcia on bass and DJ Snakes weighing in as turntablist and party rocker.
Recorded and engineered by River at North Coast Recorders in Brighton, the disc opens with the calming self-assured shuffle of Traveling Man, which finds the group collectively stretching their distinct abilities out upon a misty bedrock of musical intoxication while Mayer sings: “But when you find that life is not going your way / And they only tell you to look up to the skies and pray / That's when your mind discovers Travelin' Ways / That's when your mind becomes a Travelin' Man'.
Impeccable flourishes of acoustic guitar sprinkle the chord structures of songs like Downtown and In the Middle of the Night like raindrops rolling over pavement while the grooves and styles shift from Rap to Hip-Hop anchored by a core value of humanity, which is one of Thick as Thieves strong points as a musical collective. Jacinto's vocal rhythms blend perfectly with each note generated by the group, his words wrapping around and between each note billowing from the band like a tight leather glove.
Throughout each of the 17 tracks on this release, it's obvious that the group was striving to create something as truly distinct as it is enduring. And with such a diverse line-up focused on such a seamless yet equally divergent cycle of songs, the great attribute about this release is that the music never seems to stop, while the soul is completely satiated.
Thick as Thieves will be performing at their CD Release Party for Any One of Us on Saturday, September 1st at The Mixx Ballroom on Hamilton Street in Old Town Saginaw.  Doors open at 9 PM and tickets are only $10.00 presale and  $15.00 at the door.  For tickets and to obtain a copy of Any One Of Us, go to www.thickasthievesofficial.com.